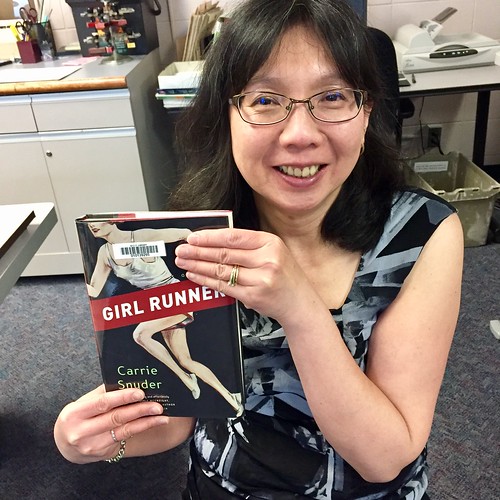 Which book did you choose?

As a young runner, Aganetha Smart defied everyone’s expectations to win a gold medal for Canada in the 1928 Olympics. It was a revolutionary victory, because this was the first Games in which women could compete in track events—and they did so despite opposition. But now Aganetha Smart is in a nursing home, and nobody realizes that the frail centenarian was once a bold pioneer.

When two young strangers appear asking to interview Aganetha for their film about female athletes, she readily agrees. Despite her frailty, she yearns for adventure and escape. And though her achievement may have been forgotten by history, her memories of chasing gold in Amsterdam remain sharp. But that triumph is only one thread in the rich tapestry of her life. Her remarkable story is colored by tragedy as well as joy, and in Girl Runner Carrie Snyder pulls back the layers of time to reveal how Aganetha’s amazing athleticism helped her escape from a family burdened by secrets and sorrow.

However, as much as Aganetha tries, she cannot outrun her past or the social conventions of her time. As the pieces of her life take shape, it becomes clear that these filmmakers may not be who they seem

Can you tell us why you chose this book?

I liked that it was based on some true facts about women in the Olympics and the book was easy to get in to.

We’d love to hear more about the books you have read in the past. Could you share a few favorites?

What do you like to do in your spare time?

Can you tell us 3 items on your bucket list?