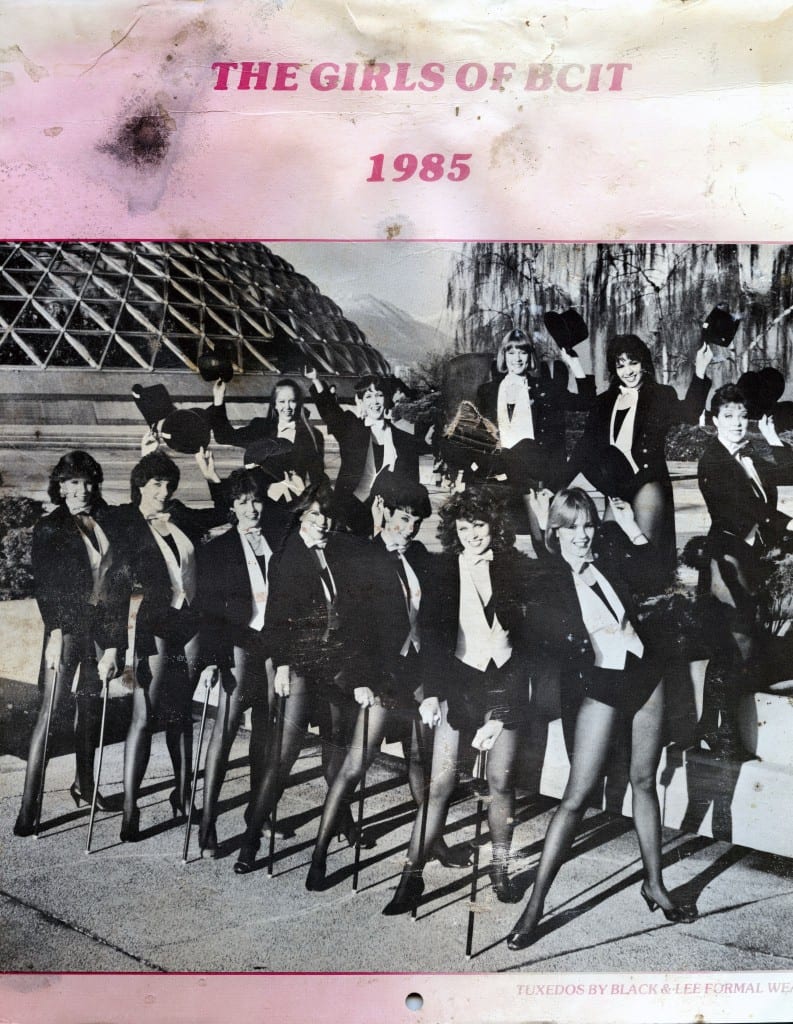 Despite the tantalizing cover, actual dirt, mould and rust were the dirtiest elements of this calendar. Although honestly the last page is rather frightening, more on that later. As I indicated in my previous post about the 1984 time capsule, there were a few items found not in the official time capsule, but nestled beside it. The items in the concrete cavity, beside the capsule, with only an unsealed plaque to block out the elements fared poorly. The above calendar was badly damaged after 30 years. Upon arrival at the Archives the calendar was damp, mouldy, warped, water and rust stained and many of the pages were stuck together. 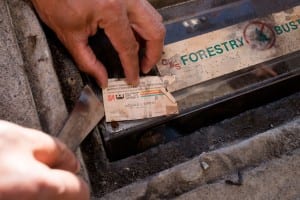 The Plexiglas time capsule still in its concrete cairn. Here you can see another item that was stored without much protection from the elements, the BCIT Student Association President’s business card. (photographer, Scott McAlpine) 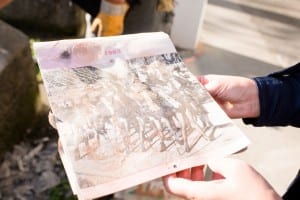 Our first glimpse of the damaged The Girls of BCIT 1985 calendar. (photographer, Scott McAlpine) 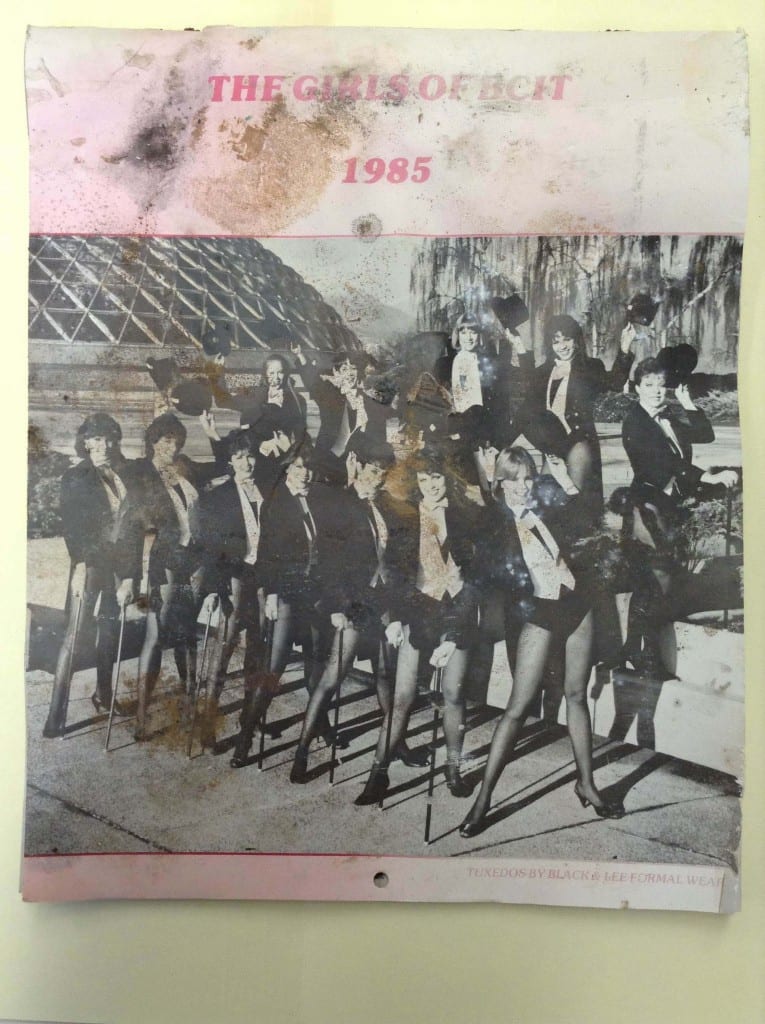 The Archivist’s first shot of the cover back at the Archives. (photographer, Cindy McLellan)

Once the calendar was in the BCIT Archives I put clean paper between the damp pages where I could and left it to dry in an archival box and folder for several weeks. Before the Christmas holidays, once I was sure the calendar was completely dry, I took the time to clean it. I was very careful as this is the only known copy. Because of the mould (now dry and relatively harmless) I wore a mask and handled the calendar wearing gloves. To clean I used chem sponges to clean the worst of the stains and a gentle Japanese brush to carefully remove dirt. 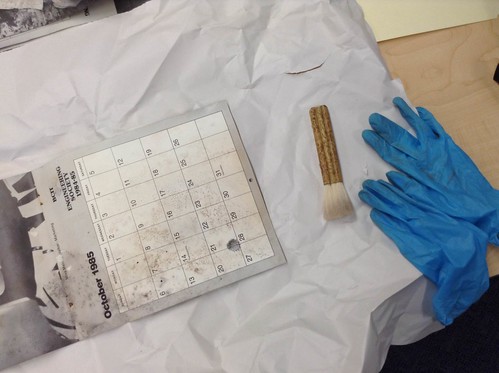 Some of the Archivist’s supplies; brush and gloves. (photographer, Cindy McLellan) 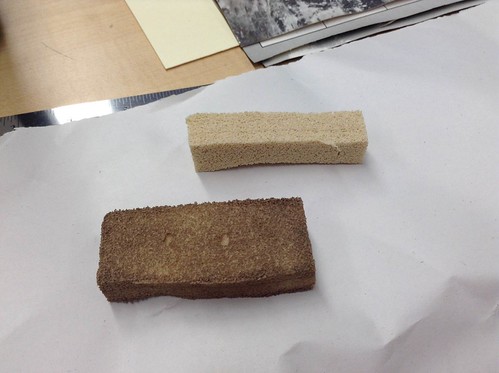 The chem sponge – before use and after, the darker one has taken on some of the dirt. (photographer, Cindy McLellan)

Once I carefully peeled back the pages and removed the rusty staples I got to see the photographs inside. The ladies kept it classy. The style was professional head-shot with name and chosen area of study rather than pin-up. 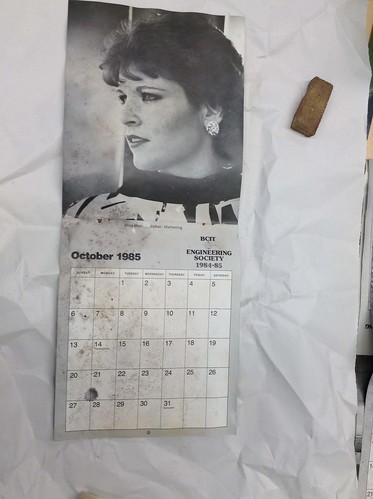 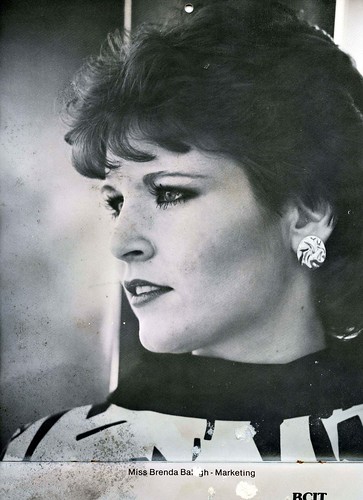 One of the joys of being an Archivist in a small Archives is getting to do many different tasks. From reference services and arranging and describing the holdings to conservation and preservation work. I had a great deal of fun cleaning these pages for long term storage in the Archives. 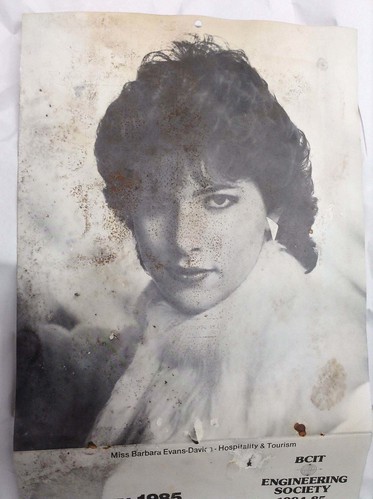 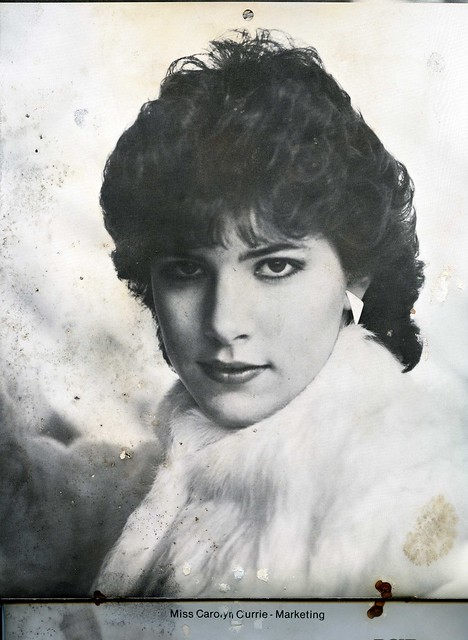 I mentioned that there was one image that was not so fun to clean. The ladies of BCIT kept it classy, not it would seem, the masked men of the 1985 survey class.* 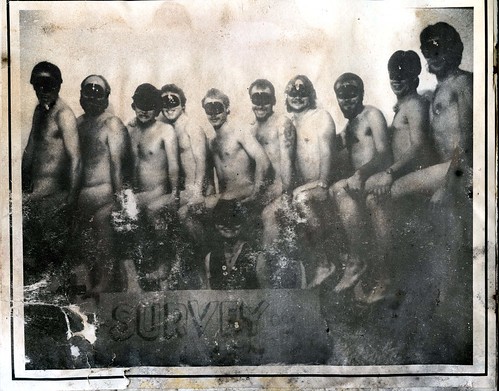 The Archivist’s first glance at the back cover and final page of the calendar. (photographer, Cindy McLellan) 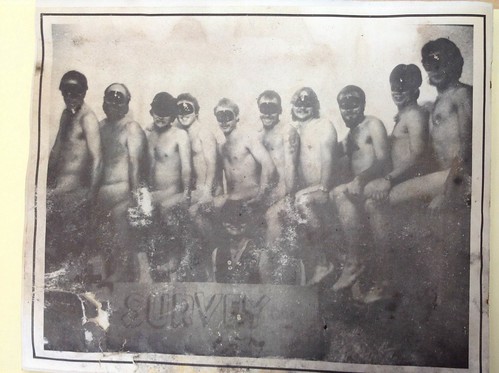 BCIT 1985 survey class as clean as I could get it! (photographer, Cindy McLellan)

Hope you enjoyed this conservation post from the BCIT Archives! Ending on a classy note. Here is one more beautiful woman of BCIT and the back cover of the calendar which reads: A tribute to the beautiful [and intelligent] women at BCIT! 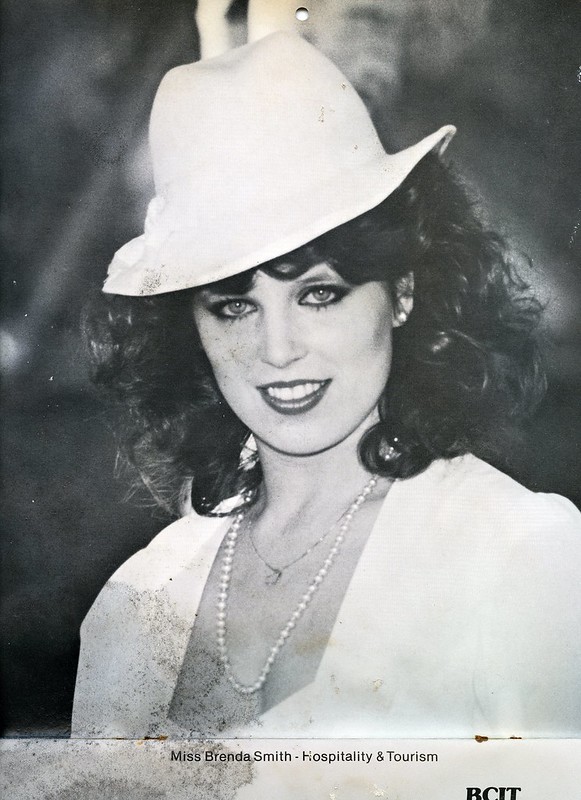 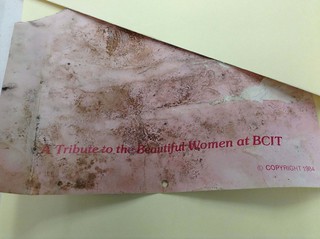 The missing half of back cover as it arrived in the Archives. A tribute to the beautiful women at BCIT!

*Update! May 25, 2015: Through the attention this post has generated I learned the context of this addition to the calendar. The naked photograph of the survey class was in retaliation for a certain advertisement placed (by the Engineering students) in the December 5, 1984 issue of the Link Volume 19, Number 14. Someone in the print shop was friends with a Survey student. Unbeknownst to the Engineers and the women featured in the calendar, survey students were given access to a box of around 100 printed calendars to which they glued their unauthorized addition. Everyone involved in producing the calendar was quite offended. Pranks between the Engineering and Survey students may have ended with this escalation. 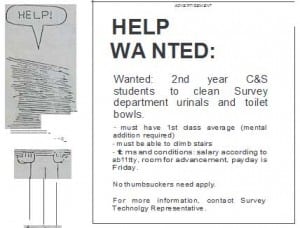