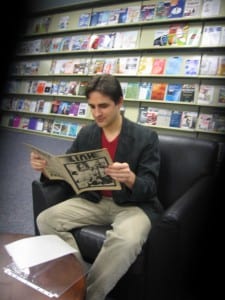 Nick Kelly perusing an old edition of The Link

This post was contributed by Nick Kelly, a student at UBC’s iSchool. Nick has been working in BCIT’s Archives for several months fulfilling a requirement for his Master’s in Library and Information Studies.

Unbeknownst to many, the BCIT Archive holds a wealth of historical photographs and documents that chronicle the highs (in many senses of the word) and lows of life at BCIT since 1964 in rich detail. The Link newspaper is one major component of this collection, but there are also boxes upon boxes of photographs and negatives that provide an even more intimate, “unofficial” glimpse of what student life was like during our parents’ (and, if you’re young enough, perhaps even grandparents’) college years. One thing is obvious right from the start: they had a lot of fun. The cover image from this 1980 issue of The Link may give you some idea as to the general tone of these photographs.

As part of a work placement for my master’s degree in library and information studies at UBC, I have been working with BCIT’s archivist over the last few months to scan, describe, and upload these old photographs for online viewing. One of my favourite parts of library work is the opportunity to engage with and learn about the resources in the library: over the summer, for example, I worked at the Library of Congress in Washington, DC to create catalogue entries for thousands of original, largely unpublished music scores from the First World War and had a great time researching their musical and historical background. The BCIT photographs provided me with another opportunity to work with one-of-a-kind items, and the experience proved similarly rewarding.

Most of the photographs—donated by the BCIT Student and Alumni Associations in dusty old boxes—are unlabeled, and researching their mysterious backgrounds has been one of the most rewarding parts of my time here. Many were traceable to The Link’s photographers, but for every image that actually made it into the paper, there is often a whole reel of unpublished negatives that are just as interesting as (or more interesting than) the published ones.

Many of these images may not have been published because they were simply considered too mundane at the time, but they now strike us as poignant reminders of a very different world. There are, for example, reels of unpublished negatives showing BCIT students competing against the likes of UBC in logger sports—wood chopping, log rolling, and so on—before that tradition fell by the wayside. There are unpublished pictures of students racing canoes, inner tubes, and surfboards in Guichon Creek for the annual “anything that floats” race. (The winning team got to unofficially rename the creek for a year—for example, Guichon Creek was lovingly referred to as “Reefer Creek” during 1981 and 1982.) Reels of film from many other events–from prominent BCIT visitors such as Pierre Trudeau and the Prince Phillip to wild (possibly NSFW) pajama dances hosted by the Department of Hospitality and Tourism–combine to provide a rich visual history.

These photographs compliment an already-wide array of more “official” images available for online viewing at the Archive’s website. As a newcomer to the BCIT community, I have had a lot of fun learning about this institution’s history while working with this collection. No matter how familiar you are with BCIT’s history, however, these images are worth checking out for the stories they tell and the surprises they hold.