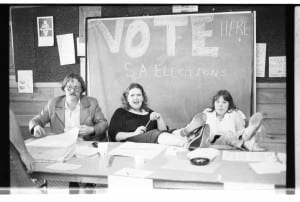 Notice the ashtray on the desk of the Student Association voting table. March/April 1980. BCIT Archives item no. a001312.

Until the mid-nineteen eighties smoking around the BCIT campus was normal. The clean air policy was implemented, to some controversy, in September of 1986 and then delayed until the new year to allow staff and students time to get used to the idea or to quit smoking.

In the beginning smoking was fairly controlled at BCIT. The BCIT Student Information Brochure from 1964/65 included a section on smoking.

“Smoking is not allowed during lectures or during labs. Smoking is allowed in halls, during period breaks. Students must use ashtrays.” Taken from the BCIT Student Information Brochure, 1964/1965. pg. 15. 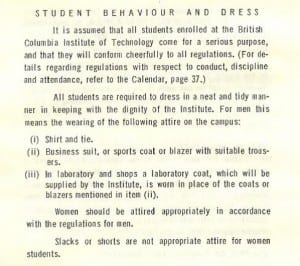 During the rainy months todays’ smokers, however, might have enjoyed being permitted to smoke in the hallways during class breaks. While by today’s standards the smoking policy was quite permissive some might find the section of student behaviour and dress very restrictive.

When the school first opened men were required to wear shirt and tie. I especially like the afterthought comments for the obviously not very well represented female students; “Women should be attired appropriately in accordance with the regulations for men. Slacks or shorts are not appropriate attire for women students.” (p. 15) 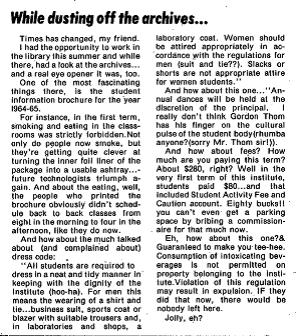 A frank and somewhat silly little piece on how restrictive it would have been to not be allowed to smoke in classrooms. The Link September 13, 1978, pg. 5.

By the 1970s it appears that it was the norm to smoke (and eat) during lectures. That smoking and eating were prohibited in classrooms in the mid-1960s was a huge shock to students in 1978. A Link article from September 13, 1978 scoffs at the idea of not being able to smoke in the classroom. The writer even offers advice on constructing an astray from the foil liner of cigarette packages. 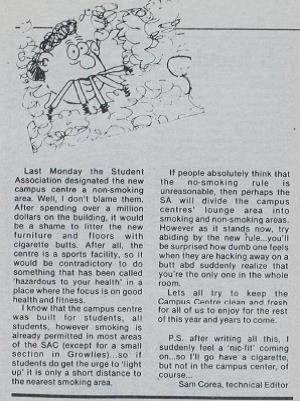 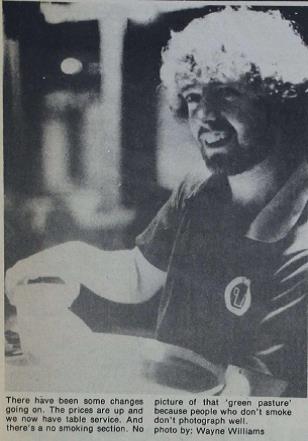 There have been some changes going on. The Prices of beer are up and we now have table service. And there’s a no smoking section. No picture of that ‘green pasture’ because people who don’t smoke don’t photograph well. From the Link 1981-01-21 p.3.

Restrictions on smoking began to slowly creep in. In 1981 the pub created a non-smoking area.

The new Student Association Campus centre (SE16) opened in 1983 with a no smoking policy. A short quote from the article above demonstrates an open attitude toward the idea that smoking is not appropriate everywhere: “ I know that the campus centre was built for students, all students, however smoking is already permitted in most areas of the SAC (except for a small section in Growlies [the pub])…so if students do get the urge to ‘light up’ it is only a short distance to the nearest smoking area.” 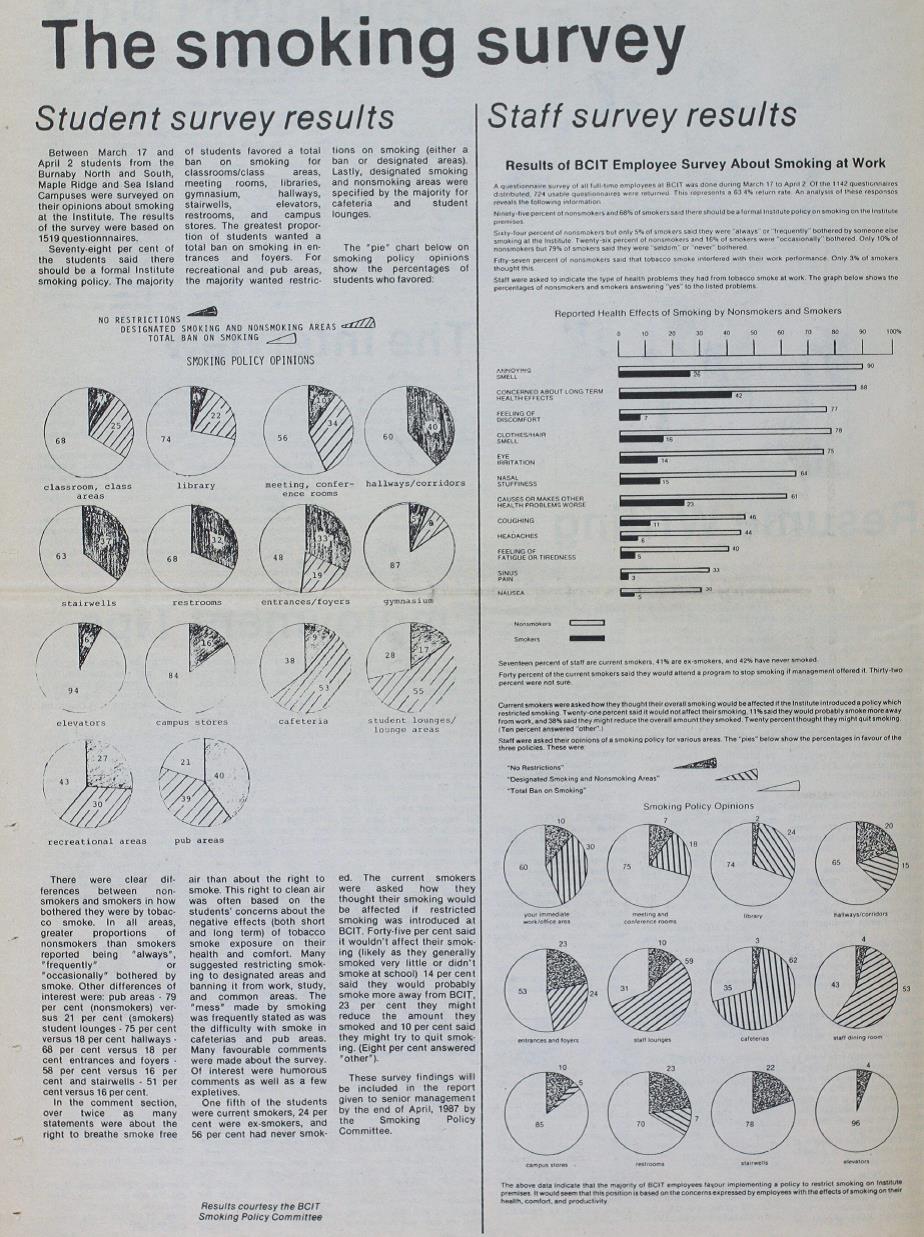 BCIT’s Clean Air Policy was jump-started in January of 1985 after a petition from 30 staff members requested their office area be designated non-smoking. Shortly after their request, Dr. Barbara Copping, BCIT Medical Services Director asked the Health and Safety Committee to initiate an Institute smoking policy. After a year of gathering health and legal information the BCIT Smoking Policy Committee met. The committee consisted of smokers, nonsmokers, ex-smokers, students, teaching and support staff, managers and Health and Safety Committee members. The BCIT Smoking Policy Committee conducted a survey of staff and students to gauge attitudes towards smoking in shared spaces at BCIT. The results showed students (78%) and staff (90%) in favour of a formal policy restricting smoking at BCIT. The list of shared spaces that the majority of students thought should have no restrictions on smoking or designated areas included: entrances/foyers, student lounges, the cafeteria, the pub, and recreational areas. Of staff respondents over half thought it reasonable to have no restrictions or designated smoking and non-smoking area of staff lounges, cafeterias, and the staff dining room (staff were not surveyed about the pub). 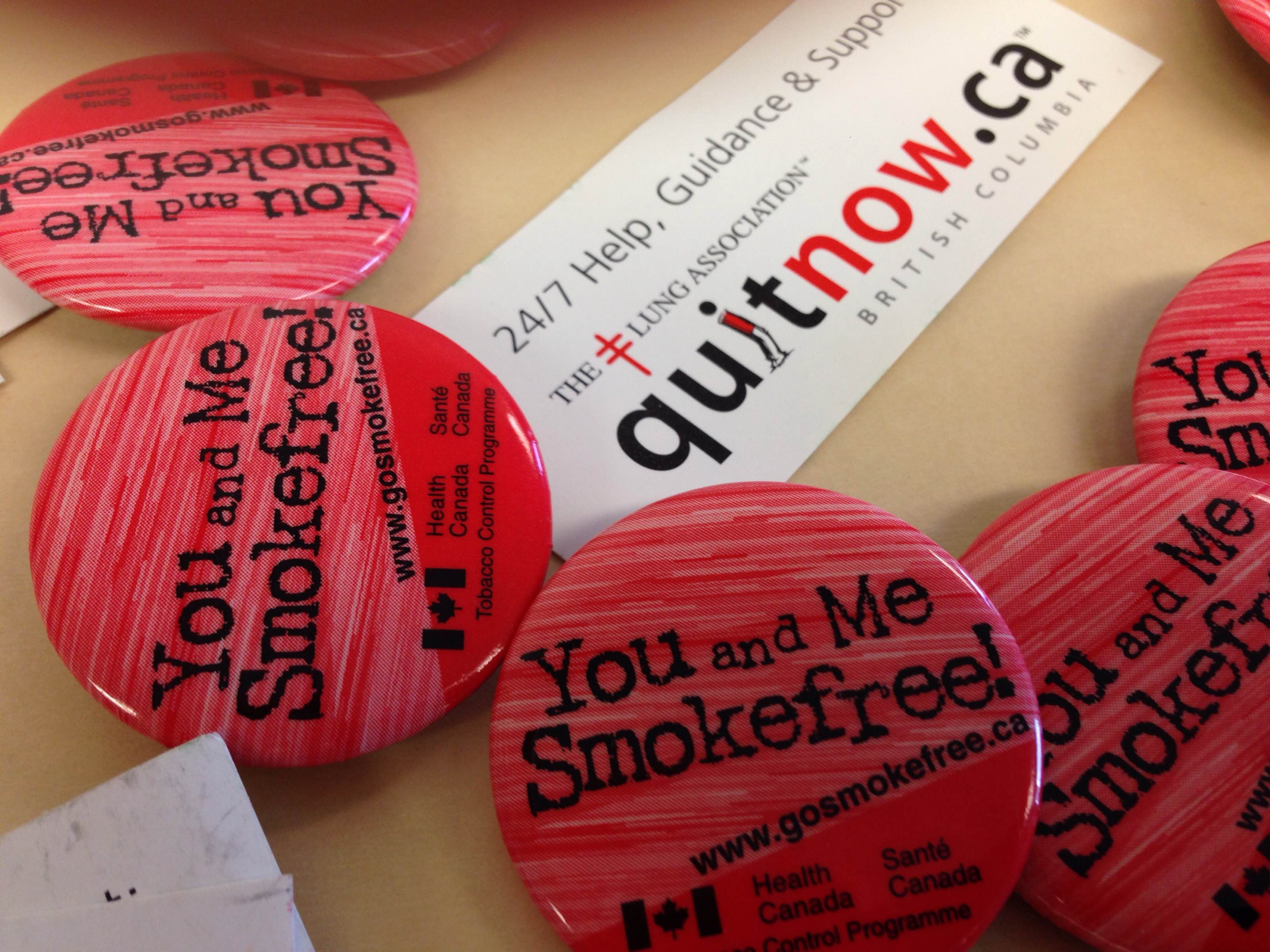 Quit smoking program ephemera from 2008 – does this look dated to anyone else? Photograph by, Cindy McLellan. 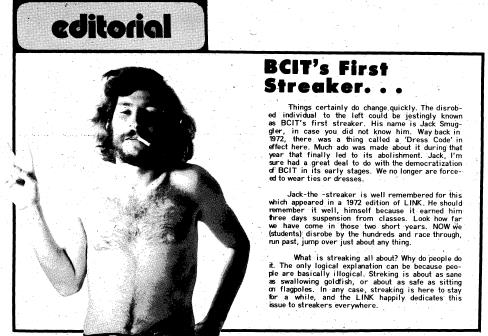 Peace out. I leave you with an image of BCIT’s first streaker. He is making the peace sign and smoking a cigarette. I assure you that he is also wearing a tie. Image is taken from The Link March 15, 1974 pg. 4

Is a coast to coast celebration of science. During the week of September 21st – 27th, over 100 institutions from over 50 Canadian cities will be showcasing the importance of science. 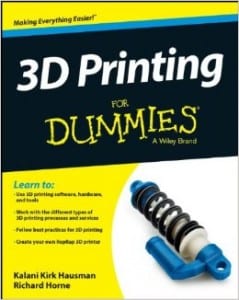 Visit the Burnaby Campus Library between 9am – 7pm and see a 3D printer live in action. It’s amazing watching a roll of plastic material fuse into an object with actual moving parts.

We also have on display … 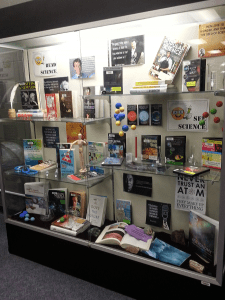 Some of our favourite science books and DVDs from our collection.

It wouldn’t be a celebration without a contest … 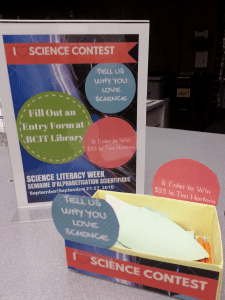 So stop by the BCIT Library between now and September 30th for a chance to win a $25 gift certificate from Tim Hortons. All you have to do is pick up a form from the Service or Research Help Desk and tell us “What you love about science”. We’ll be contacting the winner by email so make sure you put your name and email address on the back of the form. Contest closes September 30th.

To raise new questions, new possibilities, to regard old problems from a new angle, requires creative imagination and marks real advance in science.

We’ve added more technology to our collection – in addition to laptops, iPads and tablets we now have a GoPro Hero3 camera available for 2 day loan, two robots – a Kubi telepresence robot for videoconferencing and a Swivl that “turns your mobile device into a presentation delivery tool” – available for 4 day loan and chargers for various kinds of phones and devices if you find you’re on campus and running on empty… 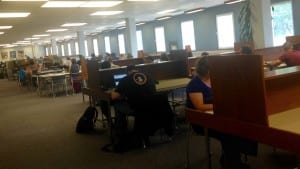 Writing help will be available online. Starting September 21 – students can submit a draft paper to WriteAway and receive feedback from a peer writing tutor within 48 hours. In person writing help is still available at the Writing Centre in room 207 of the Library, and it’s still free.

The Makerspace Project course has found a home in room 130D in the ehPod for September and October. If you’re interested in 3D printers you can have a look, and if students are in the room working feel free to ask questions. Their projects include printing parts for two 3D printers, which will be assembled for use in MediaWorks. Stay tuned.

And of course there are always new books – too many to mention, but you can always check out the list here…