May 26 to June 1 is Bike to Work Week . Whether you are a keen two-wheeled commuter or interested in bicycling more, we have some titles you may find useful.

The enlightened cyclist: commuter angst, dangerous drivers and other obstacles on the path to two-wheeled transcendence
Call #: GV 1041 E65 2012 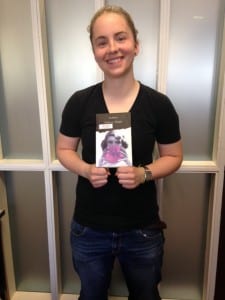 “It’s good to remember to read something less technical sometimes. The call number for literature starts with ps. This can be your post script to your studies.”

Whether you are looking for a summer job or full-time work we have resources to help you develop your resume, cover letter and portfolio and polish your interviewing and networking skills. Here are five titles that focus on the social media aspect of your work search.

Before you apply: resumes, portfolios and your online persona
Streaming video available via Films on Demand

I’m in a job search – now what??? using Facebook, LinkedIn and Twitter as part of your job search strategy, 2nd ed.
Available via Books 24×7

Canada lost one of its most prolific and well known authors last week with the death of Farley Mowat. In our collection we have many titles by and about Mowat, here are five to get you started.

The World of Farley Mowat : a Selection From His Works
Call #: PS 8526 09 A6 1980
This collection of  excerpts from Mowat’s extensive bibliography arranged by geographical location will leave you wanting to read more. The maps on the front and back flyleafs illustrate where in Canada each work was set.

Resue the Earth! Conversations  with the Green Crusaders
Call #: QH 77 C3 M6 1990
Although published in 1990, this text of Mowat’s interviews with 13 Canadian environmentalists and conservationists includes advocates – like David Suzuki  and Elizabeth May – who are at the forefront of the sustainability movement today.

The Dog Who Wouldn’t Be
Call #: QL 795 D6 M78
The story of Farley Mowat’s youthful adventures with his dog anthropomorphic dog Mutt.

Ten million books: an introduction to Farley Mowat
Streaming video from NFB
25 minutes ; 1981
This documentary includes Mowat’s recollections of the experiences that have found their way into his books and readings from some of his works.

Check out our catalogue for more titles

Says Joanna,  “It’s basically a science encyclopedia – there’s a couple of paragraphs or even up to a full page of write up on hundreds of different science topics. There are lots of great colourful photos and diagrams explaining how things work.”

May 3 – 10 is Bird Week in Vancouver so this Take 5 is dedicated to our fine feathered friends. And we have so many good bird books, we may have to Take 5 twice…or do a doubleTake – stay tuned….

This is the definitive series on the most colorful, popular and perfectly adapted creatures on earth, covering 42 countries and examining over 300 different species. The filmmakers use ultra-slow motion film that unravels the complexities of bird flight and ultraviolet cameras that reveal the world from a bird’s point of view.

This documentary explains how crows are one of the most intelligent species on the planet and shows how crows have a proven ability to reason and problem-solve, long and dependable memories, and complex social interactions that range from group play and hunting to gang-style killings and funerals. A friend who saw this DVD says she will never look at crows the same way again.

Corvids – crows and their close relations –  appear to have powers of abstraction, memory, and creativity that put them on a par with many mammals, even higher primates. this authoritative text documents the life and behavior of sixteen representative corvid species that inhabit North America and Europe. The author describes birds that recognize each other as individuals, call one another by name, remember and relocate thousands of hidden food caches, engage in true teamwork and purposeful play, and generally exhibit an extraordinary degree of sophistication.

A thorough account of the life and times of hummingbirds, their place in history and in the cosmology of Native peoples throughout North and South America. This volume includes beautiful full page, full colour photographs.

The first two chapters cover a general introduction to the phenomenon of bird migration, followed by chapters on specific types of migrating birds, including the Blackpoll Warbler, the Broad-winged Hawk, Sandhill Cranes, the White Rumped Sandpiper and Hummingbirds.

This photo is from BCIT’s Historical Photograph collection  ….(http://contentpro.lib.bcit.ca/iii/cpro/CommunityViewPage.external?lang=eng&sp=1000012&suite=def) and it looks like it could be taken on a day just like today 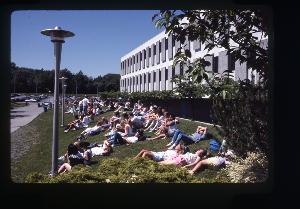