For over eight years David Pepper has been a part of our BCIT Library family.  As David prepares to retire we know that we will miss not only his vision, leadership, and support,  but also his infectious smile, sense of humour, and last but not least all of the homemade treats he shared with us.

We wish David a retirement filled with health, adventures, and happiness! 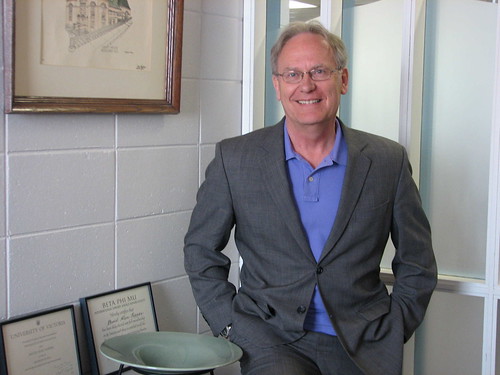 David recently shared this speech at his retirement celebration and we thought it was worth sharing:

Ever since I announced my retirement, conversations have swirled around the following:

Anticipation … Expectation … Uncertainty … Apprehension … Excitement … “Do you have a well-planned strategy, or are you going to just wing it”?

None of these feelings are new – to me or to you. Sounds like how I felt the night before I was married … the day I started grad school … my first position at UBC … day 1 at BCIT … the birthing rooms when both daughters were being born.

So, why all the fuss about retirement? What is the differentiator that makes this experience unlike anything else? I’ve come to the conclusion – are you ready – it’s really all about not being the boss of anyone, or not having a boss! Effective January 1, 2016,  I won’t have to take or give direction, balance someone else’s budget, stress or dream about unfinished projects, deadlines, selection committees … I will be a free agent! Right?! Hmmm …

I started working (for pay) when I was around 12. My first boss was my father who paid me for ridding the garden of cabbage moths (1 cent/moth) – slam dunk, you say? No way! I had to develop a strategy: had to get to know the moth’s takeoff and landing habits, had to plan for uncertainty (rainy days when the moths didn’t appear), there was apprehension that dad would say he’d exhausted his budget on pest control & I would be out of work – or that my brother would decide he had a better control method and I would be forced out by the competition.

My teen years would be marked by a number of ventures – and each one would teach me the values of persistence, creative thinking, how to deal with a difficult boss etc., highlighted perhaps by a summer spent in an underground copper mine on Vancouver Island. That was my coming-of-age-summer!

Anticipation … Expectation … Uncertainty … Apprehension … Excitement … they all still accompanied me.

I’ve been really fortunate in my professional career to spend time in private, government and academic settings covering disciplines as diverse as mining, engineering, chemical processes, forestry, biomedical sciences, trade development … post-secondary education at the college, university and institutional levels. It might seem contradictory but it’s been a great experience being part of the library profession where we keep trying to assert our value to our client base. The result – we’ve never been complacent because we’re always trying to reinvent ourselves.

I’ve had opportunities to speak at conferences in the South Pacific, New York City, San Francisco … to teach college and university students – to shatter a few paradigms and create new ones with some of the most intelligent and wonderful human beings on the planet! I’ve also had dysfunctional bosses and employees – fortunately they have been few in number. My favourite boss lived in Atlanta, GA while I was based in Vancouver! Every experience helped to mould me in some important way that informed the drama played out in my life.

“In the privacy of the heart take out the album of your own life and search it for the people and places you have loved and learned from yourself, and for those moments in the past -many of them half forgotten-through which you glimpsed, however dimly and fleetingly, the sacredness of your own journey.” Sacred Journey by Frederick Buechner

Anticipation … Expectation … Uncertainty … Apprehension … Excitement … “Do you have a well-planned strategy, or are you going to just wing it”? These have all been with me since early teen years … and will continue to walk with me on the journey ahead.

“All who wander are not lost” (Tolkien) I expect – and hope for plenty of wandering ahead … and if I get lost, there’s plenty I’ve learned … and plenty of love and faith to get me back on track.