NE08 is home to the students and faculty of the Welding Program at BCIT.  Welders contribute to a vast variety of BC’s industries including the production of structural steel for high-rise buildings and bridges, shipbuilding, mining, pipelines, and more.  Metal welding and cutting produce air contaminants that are potentially harmful to students and faculty.  Ventilation systems that remove these contaminants must therefore be put in place to ensure that the welding shop remains comfortable and safe for its occupants.

The old NE08 welding shop ventilation system was installed in 1983 and was due for replacement.  It comprised five zones designed to remove air and welding vapours from work stations (welding booths, cutting tables, grinding machines, etc.).  Each of the five zones was equipped with multiple exhaust fans and make-up air units that replaced the extracted air with outside air to prevent the building from operating under negative pressure.  Staff turned the system on in the morning (at 7:00 AM Monday through Friday and at 8:00 AM Saturday).  Staff turned the ventilation system off at the end of the instructional day (at 10:00 PM Monday through Friday and at 4:00 PM on Saturday).  Once on, the ventilation fans ran at constant extraction volume and maximum capacity (approximately 66,000 cubic feet per minute) regardless of whether one welding booth was in operation or all  112 booths (80 booths for arc welding and 32 booths for oxy-acetylene welding) were in operation.  The make-up air units needed to supply outside air to replace the extracted air.  During colder months, this make-up air had to be heated by natural gas burners located in the make-up air units.

Analysis of historic energy consumption data showed that NE08 had the highest energy consumption per square metre of floor space of any building in the Factor Four Area.  NE08 therefore became the subject of two high-level energy audits in 2010: one by BCIT SEMAC students and the other by a consultant engaged by BCIT under the Fortis BC Energy Assessment Program.  Both studies identified the inability of the existing ventilation system to adapt to varying ventilation requirements as a significant source of energy wastage – electricity to run the ventilation and make-up air fans and natural gas to heat the make-up air – and, as such, an outstanding energy savings opportunity.  Based on these two studies, the SoCE released funds for a detailed study of the ventilation system.

1. Each welding booth is equipped with a fume hood connected to the main air extraction system ducting.  Each fume hood continually extracts approximately 200 cubic feet per minute (cfm) from inside the booth.  This constant volume extraction and equivalent make-up air provide base ventilation to meet building code requirements regardless of how many work stations are actually in use.  The fume hood extraction also serves as “back-up” in case the students do not properly locate the telescopic arms while welding (see below).

3. Work stations are equipped with one of three control technologies that signal the system to begin extraction:

i. Control Technology 1 – As a student switches welding equipment, a current transformer (commonly called a CT) signals the controller that extraction at the telescopic arm is required.  This technology is being tested in all arc-welding booths except 16 that are using technology 2 (see below).  The advantage of this technology is that fumes are only extracted when created, maximizing energy savings.  The disadvantage is that it does not offer a “buffer” and a fear is that during the first fraction of a second, the fumes are not captured by the telescopic arm (and rather gets capture by the hood extraction).

ii. Control Technology 2 – As a student enters the welding booth, a motion sensor located inside the booth signals the controller that extraction at the telescopic arm is required.  This technology is being tested in 16 arc welding booths. The advantage with this technology is that it offers a guaranty that when a student will create fumes, the ventilation system will already be On.  The disadvantage is the fan could be extracting air (warm air in the winter) for fairly long period of time before any fumes are created, as the student needs to do a lot of preparation work in the booth before striking an arc.

iii. Control Technology 3 – As a student enters a grinding booth, they have to step on a pressure sensitive mat that is connected to the control box. The disadvantage of this solution lies in the unknowns regarding maintenance (how difficult it will be to clean the mats, and how likely is it they will get damaged because of hot material falling on the floor).

iv. Control Technology 4 – A fourth technology that has not been implemented as part of this project is an arc sensor.  As a student switches welding equipment on, an arc sensor located on the equipment sends a signal to the ventilation system controller telling it that this station is no longer idle and now needs extraction at the telescopic arm.  This technology has similar pros and cons to the CTs option.

6. While the work station is in operation, air contaminants are removed through the fume hood and the telescopic arm to maintain air quality.

The project was completed in the fall of 2013.

Total energy conservation (measured, normalized savings after a a few months of operations) :

Fortis BC funded the initial engineering assessment.  The project was also made possible through the dedicated teamwork of project managers from BCIT’s Facilities and Campus Development group working with the staff from the Welding department.  BCIT anticipates receiving a $172,000 contribution from BC Hydro Power Smart.

Watch a summary video of this energy retrofit project 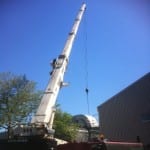 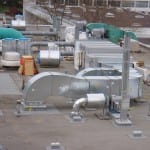 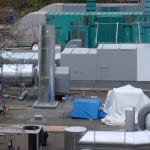 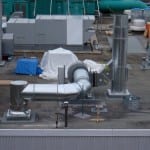 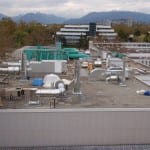 General view – Lots of work in progress on the roof! 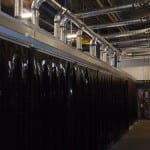 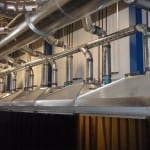 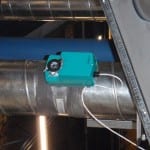 Actuator for damper – The new system is demand-controlled 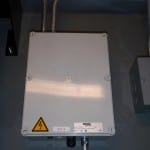 Controls in each booth 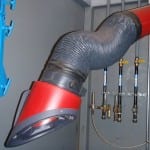 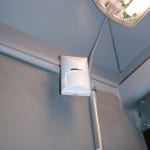 Occupancy sensor in each booth – The new system is demand-controlled 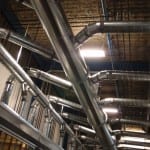 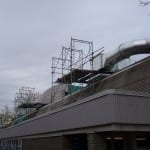 Scaffolding around AHU #2 and #3 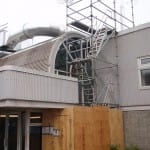 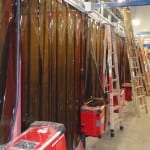 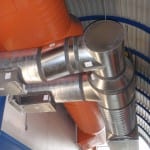 Learn more about the technology selected for the smart ventilation 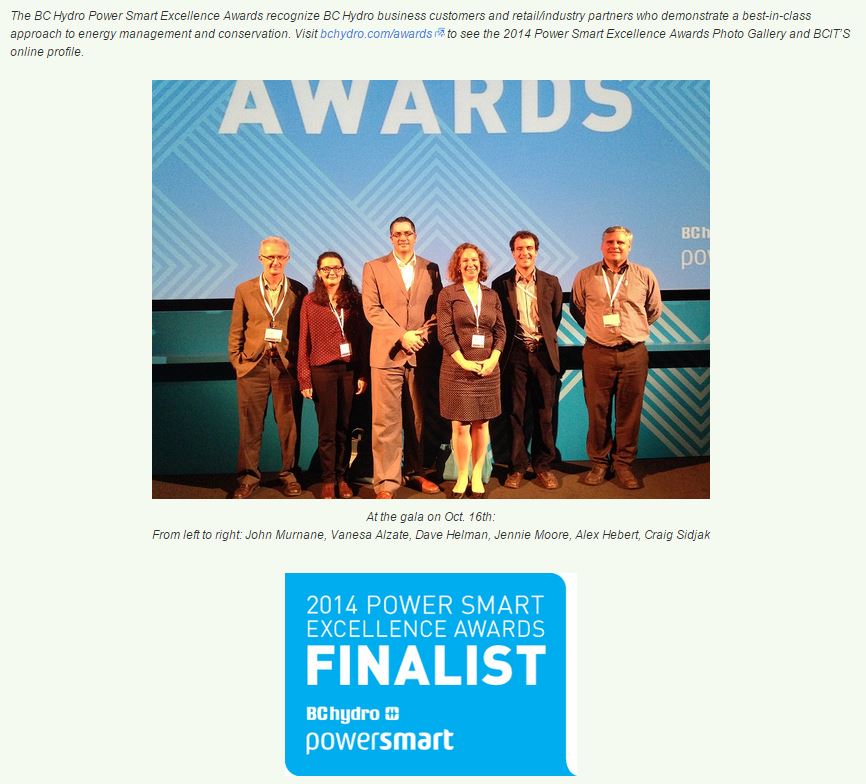