Guichon Creek has been restored on the South side of campus, but travels through a culvert from the Student Recreation Centre (SE16) to Canada Way. For the last few years the salmon were able to travel up Still Creek then Guichon Creek to the edge of the BCIT campus, and in 2016 a few determined ones made it further for the first time in 50 years. Without daylighting the creek it will only be the rare salmon that is able to traverse the 700 meters of culvert.

This culvert runs under the small alley between Piping (NE6) and Welding (NE8) which has been named Guichon Alley. The goal of this project was to create a student space that would draw attention to the where the creek runs underground and get people ready for the work of restoring it across campus. The creation of the Guichon Alley student space was a partnership between the Student Association, the School of Construction and the Environment and Facilities and Campus Development.

Most people on campus are unaware that Guichon Creek continues to flow underground through the Northside of campus. Increasing this awareness is the first step towards daylighting the creek. You can’t hope to daylight something you’re not even aware of. The Guichon Alley student space project was created to increase awareness in the alley between Piping and Welding, because it follows the pathway of Guichon Creek. The design also adds much needed space for students on breaks and lunches to enjoy. 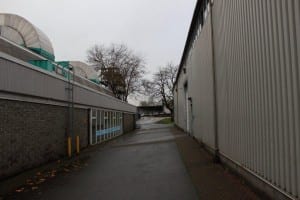 Funded by the Student Association, the Guichon Alley project has drawn on the skills and talents of many departments in the School of Construction and the Environment including Interior Design, Metal Fabrication, Carpentry, Joinery and Electrical. Facilities and Campus Development have also been integral to the planning of this space.

The project began when BCIT Interior Design Students were asked by instructor Dixie Hudson to explore low-cost changes that could be made to create Guichon Alley. They then presented their ideas to a panel made up of Instructors, and staff from the Student Association, Facilities and Campus Development, and the School of Construction and the Environment. The Student Association was interested in using one concept and funding the creation of the student space. The design from the Interior Design students was then reviewed by an architect and a final design was created.

Metal Fabrication instructors planned and created the bench supports, and students in the Metal Fabrication class produced them. The installation into the concrete of the Piping building (NE6) was done by Carpentry students, as was the installation of the bench tops. The existing lights were replaced with LED’s by Facilities, reducing energy consumption. Electrical students added mid-level decorative LED fixtures to enhance the space and increase its use as a pedestrian walkway. Planter surrounds were created by the students in the Carpentry department. Stainless steel fish were created by the Metal Fabrication Department to decorate the benches and planter surrounds. Once completed the metal fish were installed by students from the Joinery Department. Over 90 students have been involved in the creation of this student space.

The interior design students also identified a photo mural for exterior of the welding shop, opposite the benches. The School of Construction and the Environment created these panels that incorporated images from the creeks past, in recognition of BCIT’s 50th Anniversary. 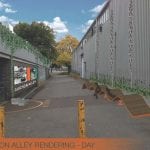 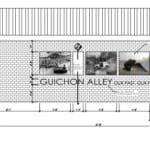 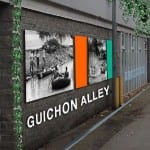 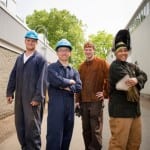 Piping and Welding students pose for the mural. 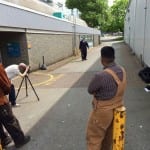 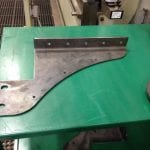 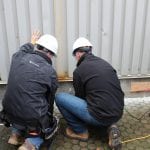 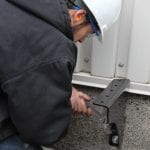 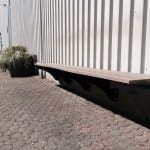 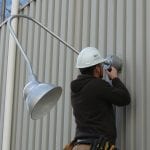 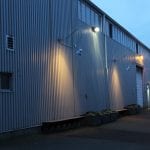 The lights are controlled by a timer to be more energy efficient. 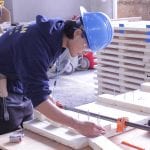 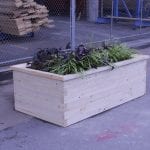 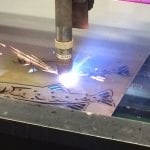 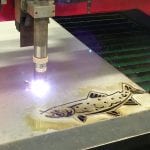 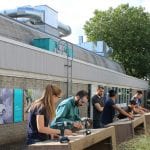 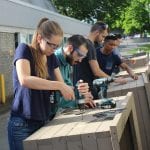 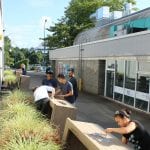 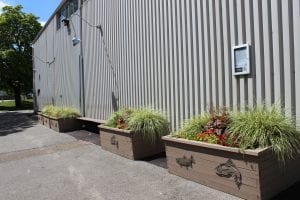 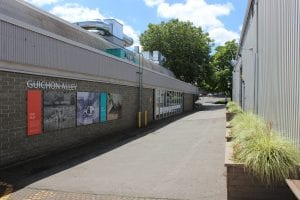