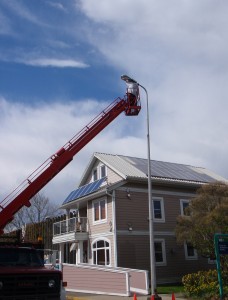 HID light being replaced by LED in front of Factor IV AFRESH house.

Here is a project you would probably not notice unless you read about it. BCIT’s Facilities and Campus Development department has replaced on April 15th, 2013 all the old lights (HID – 250 Watts) on Smith Street with new General Electric LED Cobra Head parking lights (142 Watts). The new Cobra Head LEDs save electricity (and associated costs) but they also make maintenance easier. The new lights are expected to last for 50,000 hours. That means it should take more than 11 years (at 12 hours per day) before we need to climb up there to replace a burnt light bulb. We are therefore also saving money on maintenance. Smart!

BCIT received so far more than $25,000 from BC Hydro Power Smart for the overall LED Cobra Head project accross BCIT Burnaby campus.  Thanks again to the Facilities and Campus Development team for making this project happen!

Highlights about the technology: