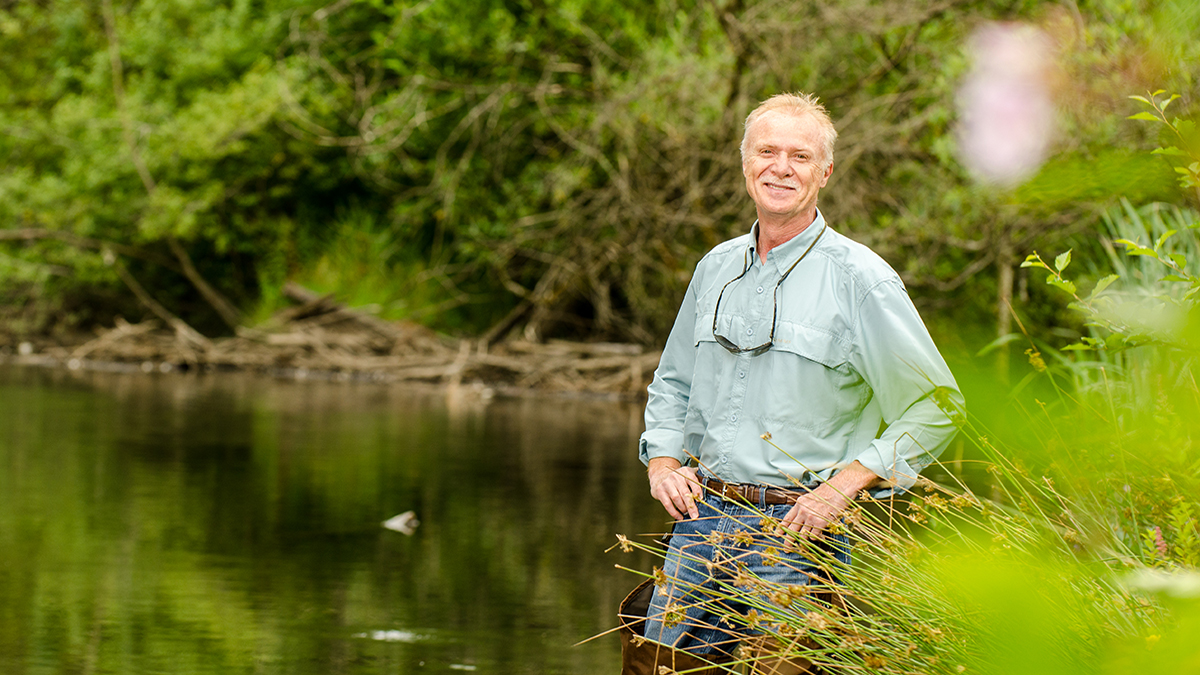 Occurring on the last Sunday of September, World Rivers Day is a global event celebrating rivers in Canada and around the world. To mark the occasion, Mark Angelo, Founder of World Rivers Day, Chair Emeritus for the BCIT Rivers Institute, and longtime BCIT instructor, shared his wisdom in honouring this special day.

As a devoted conservationist, paddler, educator, and researcher, Mark has paddled a thousand rivers in his lifetime. He’s traveled the entire length of the Fraser, as well as waterways throughout Asia, Africa, and the Americas. He has seen the decline and rebirth of some of the greatest rivers on earth.

Mark’s favourite bit of running water might just be a rather modest one, however—Burnaby’s Guichon Creek.

“I think it’s a jewel,” he says smiling. “I go down to that creek all the time with our grandkids, and I did with our kids, too. They throw the worm in the creek just to watch the trout come up and grab them. I’m such a fan of doing whatever we can to expose kids to nature.”

Guichon Creek runs, for part of its length, through the BCIT Burnaby Campus.

“BCIT is probably the classic example in the entire country,” explains Mark, “of a campus that has a fish-bearing stream of both trout and salmon, that has been restored from a totally dead stream to now a very vibrant waterway.”

Protecting rivers as arteries of our planet

Thanks to the decade of sustainability-focused leadership, education, and research from the BCIT Rivers Institute the stream has been restored. Mark remembers when that process started.

“I remember meeting an old-timer who lived in Burnaby for a long, long time,” he says. “He talked to me about the fish he used to catch and how neat the creek was when he was young in the 20s and 30s. I had just started with the Fish, Wildlife and Recreation program, and thought, ‘Wouldn’t it be neat to make the creek what it once was? What if we tried to restore it? Let’s try this effort to try to turn this around.’ So, we started.”

Through his efforts—and the work of his students and colleagues—both Guichon Creek and Still Creek (which is connected to Guichon) came back, bearing both trout and salmon.

“During one of the years, we actually had salmon that made it all the way into the culvert, right into the spillway at BCIT,” Mark boasts.

With plans to daylight the creek on the north side of campus, Mark is confident salmon will start spawning in Guichon again. When that happens, he’ll likely be there with his grandkids to watch.

“The life they see along that creek – well, rivers are life-lines in the truest sense, for fish, for animals, for people. They have this immense natural, cultural, and recreational value. You know, spending time at a creek or a stream with a child – there’s nothing better.”

Sharing his work with the world at Ecocity 2019

From government to community groups, including Indigenous communities, Mark’s research and advocacy work have impacted many and have also been instrumental to provincial and federal public policy changes. His upcoming speaking engagement will be at Ecocity World Summit 2019 where he will share his personal journey from urban stream restoration to World Rivers Day. Learn more about Mark and his academic keynote at Ecocity 2019 in Vancouver this October.

This story is part of the monthly Countdown to Ecocity 2019 series, which highlights BCIT’s leadership in the face of today’s complex environment challenges. This initiative supports the Ecocity Standard for Clean and Safe Water, which aims to preserve the health and function of water ecosystems.

Learn more about BCIT’s role as host of the Ecocity World Summit in 2019.

Tags: Ecocity, School of Construction and the Environment, Sustainability