American singer, Lana Del Rey, has been in the spotlight this week after the release of her latest music video as well as comments about what’s happening at the White House.

The singer received backlash regarding her album cover that she describes as being “inclusive.”

A statement made such as, “my best friends are rappers” may not have been the move Del Rey should have went with.

“There’s always turmoil and upheaval and in the midst of it- there’s always beautiful music too introducing my new album Chemtrails Over the Country Club.” Was the caption to Del Rey’s Instagram post where she shared her new album black and white artwork where she is surrounded by ten women.

The video has a vintage vintage Wizard of Oz vibe before transitioning to a dark, vampire fang, glowing eyes, werewolf world that’s on fire. To say it’s hard to follow, is an understatement.

After posting her cover, the comments blew up. Since the photo is black and white and they video is in colour, people recognized faces in the video who’s skin tones are not how the cover is perceived. 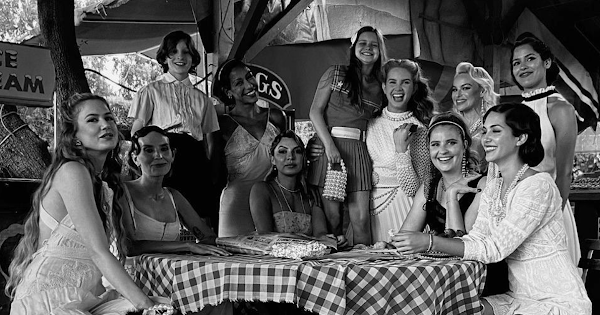 In a comment, Del Rey wrote, “these are my friends this is my life. We are all a beautiful mix of everything- some more than others which is visible and celebrated in everything I do. In 11 years working I have always been extremely inclusive without even trying to. My best friends are rappers my boyfriends have been rappers. My dearest friends have been from all over the place, so before you make comments again about a WOC/POC issue, I’m not the one storming the capital, I’m literally changing the world by putting my life and thoughts and love out there on the table 24 seven. Respect it.”

And yes you guessed it, BACKFIRE!

The blow up line of that was saying her friends and boyfriends are “rappers.” People on Twitter and Instagram attacked the Summer Time Sadness singer. Being in the public eye of the “cancel culture” we are living in, definetely should have you thinking twice or maybe three times before posting something to the public.

Following this, she did a BBC Radio 1 interview about Chemtrails Over the Country Club. This is where she opens up about how she thinks that Donald Trumps presidency “needed to happen.” With a twitter follow up later on Monday, she clarifies how her comments were taken out of context from a “well-intentioned liberal comment.”

Del Rey also took to Twitter with a video yesterday afternoon, explaining her comments about what is happening down South and how they have been twisted. She followed up with a tweet:

A woman still can’t get mad right? Even when a mob mentality tries to *incite

Safe to say, this gal has not been having the greatest week.

Chemtrails Over the Country Club will be releasing March 21.