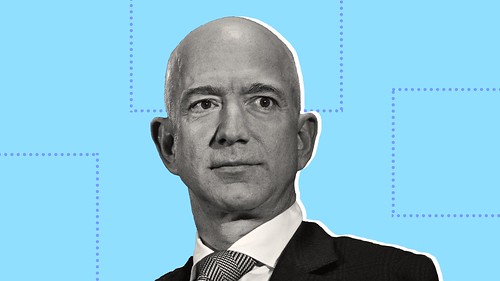 Continually raising the bar when it comes to customer experience. Using the internet and technology to help people buy and discover anything they can think of. Helping fellow businesses and entrepreneurs go further and be more successful. Jeff Bezos and Amazon are the juggernaut of business, marketing and creation.

Growing up in the age of booming technology and preparing to enter a business world filled with hundreds of millions of possible avenues to make income, I love to follow and look at the lives of those who utilize what they have so well. As a student and a young person who loves to mimic the actions of successful people that come before me, there is a handful of role-models and icons that could be considered ground-breaking to my generation. As a lover of Sport, it is easy for a person like myself to look at pioneers like LeBron James and Tiger Woods and say; “that man is a role-model” or “that is who I want to be.”

Yet, in a way it feels almost too easy. Those are two prime examples of who many people look up to in this generation, and rightfully so. They broke barriers not only in their respective Sports, but culturally as well.

My top role model stems from a different side of world-changers, the business side, where success isn’t as much driven by your physical ability or what you can do, but more of how you think and innovate.

On this day in 1964 in Albuquerque, New Mexico, Jeffrey Preston Bezos was born. His upbringing was just like that of a lot of people, simple and intriguing. From a young age, Bezos displayed a fond interest in science and was savvy in the early age of technology. He loved to write and tell stories with his work, and was touted for how well he could speak in front of an audience. Like many of us, he worked the morning shift at McDonald’s every weekend throughout his high school years, but used that time to project what he wanted for himself when he was older. In his valedictorian speech to his graduating class, he told the audience he dreamed of the day when mankind would colonize space. He was a dreamer and was ready to take action on it.

A simple reason as to why I decided to write about the life of Jeff Bezos tonight; because there is nothing more I would love to do in my own life then build an empire with my mind. Using creativity and imagination to someday make a fortune and live a life of new experiences and opportunities, it all sounds like a far fetched dream to me.

I’ve decided to break this up into 2 categories, and they go as follows:

Bezos’ life doesn’t come without controversy, the obvious stories about his personal life and absurd amounts of money that him and his organizations reel in are there to belittle what he has created, but on the topic of his impact upon the world, there is more good than bad, yet I will speak a little bit on both.

A good way to start this sub-topic is to ask my readers, what would your holiday shopping have looked like without Amazon? Most will answer with “impossible” and some may be the opposite, yet, it all still probably falls into the same designation of “impossible” one way or another.

To elaborate on this, since Amazon was founded in 1994, it has come further and further towards dominating the world of sales in ways that other companies fear and are forced to follow. Amazon is driven by the power of the consumer, through pricing, experience and handiness. When a person is shopping on the internet, which in the age of COVID is expeditiously more frequent, regardless of it it is on Amazon or not, that company is competing with the tech giant for your business. 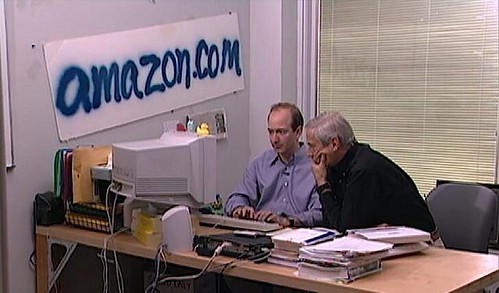 Amazon Prime was introduced in 2013 and since then, the opportunity for online retail has gone through the roof. Nowadays, you can order something off the Amazon website, and through their continually improving service, you may get it the same day, at latest the next day.

This was all an idea just a decade ago, but Jeff Bezos had a vision for him company and himself, allowing for it to slowly become a reality. Amazon has contributed heavily in being a reliant employer and as their brand expands, new jobs and careers are being planted on a daily basis.

Although it is a known fact that Amazon has a large role in the elimination of other businesses, there is something to be said for companies that won’t adjust and accommodate to the needs of a costumer/consumer, and many businesses ended up paying the ultimate price for it.

“Over the last 10 years, Amazon has become one of the most powerful, respected and feared companies in tech, and well beyond.” – Matt Rosoff, CNBC

Amazon will go down in history as one of, if not the most important company to ever exist. How that was created by Jeff Bezos, who is just like anyone else and was just building on a dream, is something to be in awe of.

According to Forbes, Bezos is worth approximately $182 Billion, and makes somewhere around $13 Million an hour. The fortune is a thing the behold, but it is easy to look at how much money the man has accumulated with his own accomplishments and say he is just a rich guy who does smart stuff. It goes beyond the dollar signs.

Jeff Bezos is one of the first successful, wealthy people to display the leadership qualities of a president. He is adamant about wanting people to think in a long term perspective. What will make you and your situation better in 5 minutes? Planning and goal setting is another renowned aspect of Bezos and his outspoken leadership. Many people who follow the Amazon plan understand that these types of leadership techniques are tied to what has made Bezos so fitting for the title of “pioneer”, and are all things that I am striving to do not only starting this year, but for the rest of my life, too.

Turning 57 years old today, I’m sure there is a big beautiful boat somewhere along the coast of somewhere right about now. Toasting a small glass of expensive liquor to what has been monumental run so far.

On the other hand, I wouldn’t be surprised if he’s at home reading a book about planets or somethin’, either.. It is Jeff Bezos after all.