If you didn’t know already, the Whitecaps faced an incredible loss Wednesday night. LAFC beat them 6-0…yeah that’s pretty brutal but atleast the Whitecaps twitter handle was laughing it off the best they could. 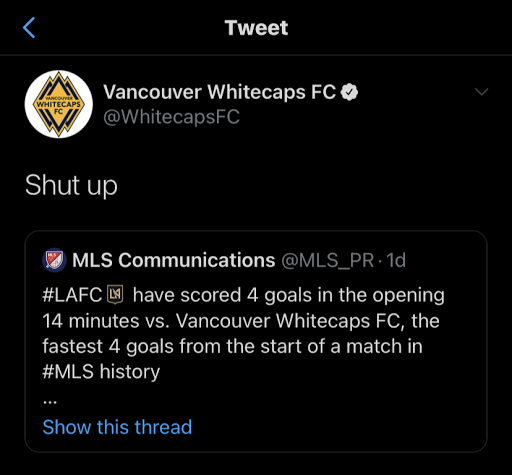 CEO Axel Schuster on the other hand did not take it so lightly when asked in conference he states;

“I was totally pissed yesterday. I had to be careful not to say the wrong things. I’m kicking everybody here in their ass to become better every day, to find solutions, to find answers. Yesterday, there were no excuses for that.”

“Today is not an off day for staff, it’s a working day for every single staff member, starting with me”

“The thing I heard most from supporters was the club was not transparent, was not open. We made a lot of mistakes. The first thing we have to change, after such a game, is to be transparent, to be open, to not look for excuses.”

Currently the Whitecaps must play all games in Portland so maybe they’re a little homesick. This game was also the debut for goal keeper Bryan Meredith, but defender Jake Nerwinski stated what happened was not his fault. Coming up on Sunday 27th is a match against Portland Timbers at 7:00pm. Hopefully the team has regrouped and can make a comeback from Sunday’s loss.