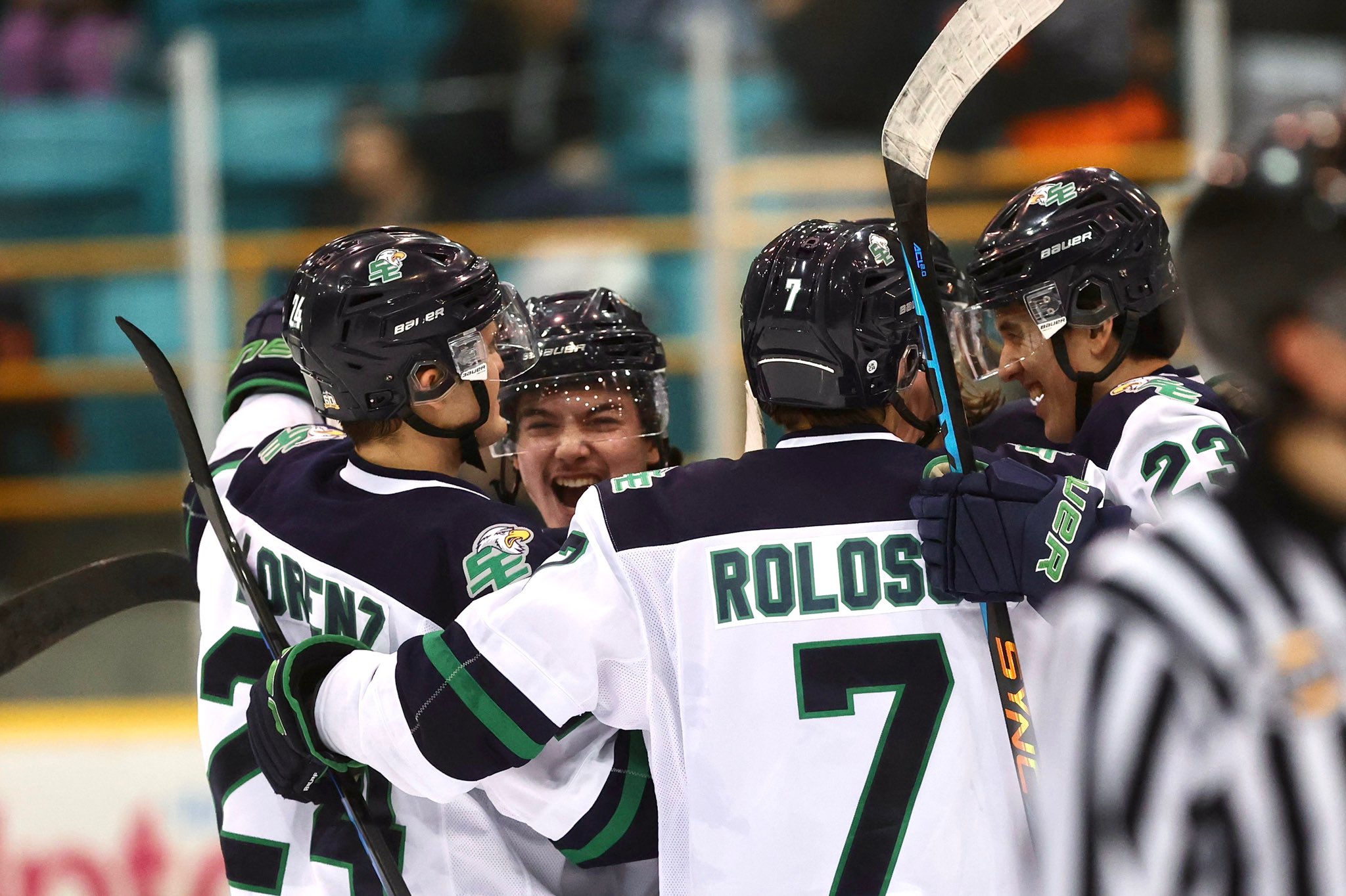 The BCHL season is less than two months old, but it may have already seen it’s Game of the Year on Sunday night.

The top two teams in the Coastal Conference faced off at the South Surrey Arena, as the 1st place Nanaimo Clippers came to town to take on the 2nd place Surrey Eagles, in the second matchup of their season series, after the Clippers took the first between the two a number of weeks ago out at Frank Crane Arena in Nanaimo.

Before the puck dropped, the Eagles hosted a pregame ceremony, where Surrey was honouring Semiahmoo Minor Hockey, along with Semiahmoo First Nation.  The Eagles first presented a cheque for over $6,000 to the Indian Residential School Survivors Society, money raised with jersey auctions from Truth & Reconciliation Day on September 30th.

A special moment before our game tonight 🧡

This is what it’s all about. #NewEra | #BCHL | #everychildmatters | @BCHockeyLeague pic.twitter.com/2n7GKEJmbB

The crowd at the South Surrey wouldn’t have to wait long for the fun to begin on the ice, as Eagles winger Logan Lorenz tipped a point shot from Tate Taylor past Clippers netminder Aiden Campbell, less than four minutes into the game.  It was Taylor’s 18th assist, and 23rd point of the season, the best among defensemen across the league.  Taylor would finish the game with two assists.  Nanaimo would respond quickly, as Captain Michael Craig knocked a rebound past Eagles tender Eli Pulver, and we were tied at one after twenty minutes of play.

In the second, recently named All-Star forward Brody Waters would give the Clippers their first lead of the game, pushing the score to 2-1 Nanaimo.  Once the second period ended, is when things truly got interesting.  Early in the 3rd, Jacob Bonkowski let a shot go from the high slot for his seventh goal of the season to tie the game up for Surrey.  Not long after, Ante Zlomislic would gain the attacking zone on the right wing and use a Clippers’ defenseman as a screen, as he let go a shot which evaded Campbell, making it 3-2, before Bonkowski got his second of the night, and eighth of the campaign, banking it in off of Campbell’s back from below the goal line.  4-2 Surrey.

The Nanaimo Clippers then showed why they’re the top team in the BCHL’s Coastal Conference, as they scored three goals in forty seconds to reclaim the lead, destroying the Eagles’ two goal lead right before their very eyes, as Jérémie Payant made it 4-3, before Kai Daniels struck twice in twenty-two seconds, stunning the packed crowd at the South Surrey Arena.  The Eagles would turn on the pressure late, as they desperately tried to stuff a puck past the massive 6’5″ frame of Aiden Campbell.  Coach Cam Keith would turn to his top line of Jake Bongo, Aaron Schwartz, and Cole Galata, who had lead the way all season long for the team, along with Oliver Gabrielson and Ty Brassington on the points.

Gabrielson picked up the puck at the right wing half wall, through a low shot towards the goal, which Campbell kicked right out to Jake Bongo at the left faceoff dot, Bongo’s shot was blocked by a sprawling defender, but the rebound went right to Cole Galata in the slot, who made no mistake firing into the yawning cage, tying the game up for the Eagles, much to the delight of the eight hundred fans in attendance at the South Surrey Arena.

IT WAS ABSOLUTE MADNESS WHEN COLE GALATA TIED IT AT 5 ON SUNDAY.

With the game now tied 5-5 with less than three and a half minutes remaining, it was all hands on deck, as both teams were looking to find a winner in regulation, as neither wanted to go to extra time.  Jacob Bonkowski would pick the puck up in his own zone, flip it into the middle for Ethan Riesterer, who carried it across the blueline, before being met by three Nanaimo players.  Riesterer would pull a drop pass for Logan Lorenz, who feathered a touch pass into the high slot for defenseman Oliver Gabrielson to skate on to, make a quick move to his right to evade a Clippers defender, and firing it back far side on Aiden Campbell, slipping it between the body and the blocker arm, making it 6-5 Eagles, sending the Nest in Surrey into a frenzy.

Listen to the South Surrey Arena (and @_JoeyPitt’s vocal cords) erupt as Olli Gabrielson gave us the late lead!!

The Eagles held on for the remaining 98 seconds, picking up their biggest victory of the season so far, in what might possibly go down as the game of the year in the British Columbia Hockey League.  With the win, Surrey moves within two points of the Nanaimo Clippers for first in the BCHL’s Coastal Conference, with two games in hand.

The Eagles are back on home ice this weekend, first on Friday night, when they welcome their cross river rivals, the Coquitlam Express to the South Surrey Arena on a very special Movember night, where the Eagles will donate $2.50 from every adult ticket sold to the Movember Foundation, in support of Men’s Mental Health.  Two days later,  the Chilliwack Chiefs will make their way down Highway 1 to Surrey for “Star Wars Night”, in support of Wigs For Kids BC and the BC Children’s Hospital Foundation, where $2.50 from every adult ticket sold will go towards Eagles’ broadcaster Joey Pitt’s Wigs For Kids fundraiser.

Elsewhere in the BCHL, the Penticton Vees continued to be the big fish in the Junior “A” hockey pond, as pushed their record breaking start to the season to twenty straight victories, after they defeated the West Kelowna Warriors 11-2 on Friday night, and the Prince George Spruce Kings 4-1 at the South Okanagan Events Centre on Saturday night.  The Coquitlam Express had a perfect weekend, as they defeated visiting opponents from Langley and Vernon on Friday and Saturday nights respectively, and up the highway in Chilliwack, the Chiefs split their weekend games with a 6-5 Shootout victory over the Cowichan Valley Capitals, and a 4-3 loss to the Nanaimo Clippers.