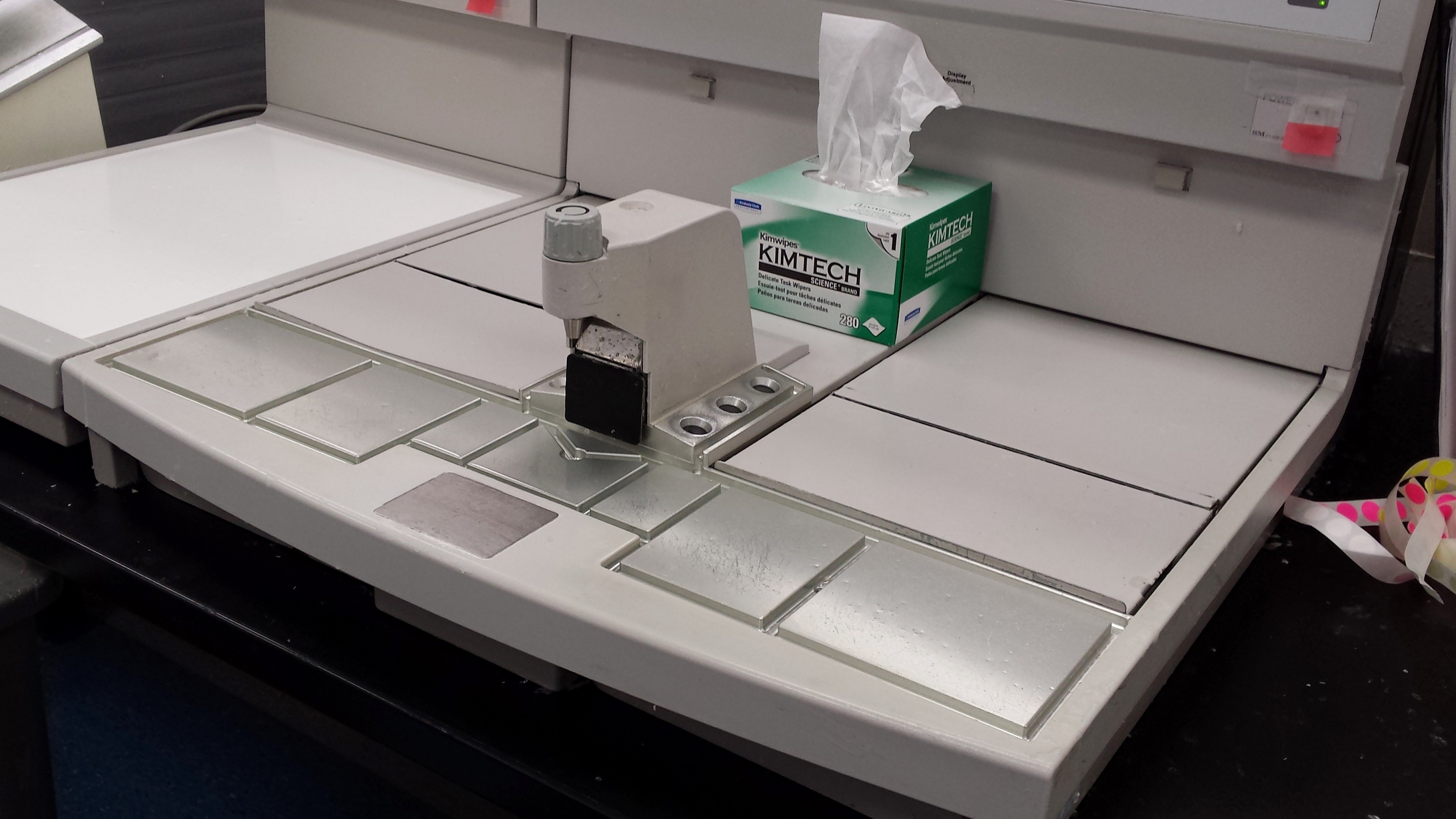 Hey everyone! It hasn’t felt like a long while, but I am already two weeks into – or one-third through – my Anatomical Pathology rotation.

My first week was split between accessioning, where the specimens are received and entered into the laboratory information system (LIS), and the gross room.

The gross room is the first area in which specimens are thoroughly examined after arriving in the department. Tissue as tiny as core biopsies, to portions of and even whole organs, are verbally described and measured. Representative sections are then cut and placed into cassettes.

While we are introduced to grossing in our Level 3 Histology course, many sites have designated pathologists’ assistants (PAs) to perform the complex gross. In addition to PAs most sites also utilize MLTs to perform non-complex grossing. The PAs’ scope of knowledge on human anatomy and physiology is incredible, and I learned a lot during my few days there. For example—when a portion of large intestine is received, it is particularly important to examine areas around the cecum and rectum. As you can see in the diagram, the cecum is located at the junction between the small and large intestines, while the rectum receives and stores waste (feces) from the large intestine before it is expelled from the anus.

Both are regions in which matter can collect and polyps – typically benign growths, though they have the potential to become cancerous – can form.

My second week was spent embedding! After being grossed, tissues are loaded onto a tissue processor. Water is removed, and tissue rigidity is increased to allow for thin sections to be cut on a microtome.

Before tissue is cut, it must be embedded—the most commonly used medium being paraffin wax. At BCIT, I only ever had to embed one, maybe two pieces of tissue in a single mold. In an actual lab, technologists are embedding up to six discernible pieces at once – or even a dime-sized collection of tissue scrapings! There are many factors a technologist must consider beyond keeping tissue flat in its mold; here are a few that stood out for me:

Orientation. Correct orientation is, without a doubt, the most important aspect of embedding. How the tissue is orientated determines what a pathologist later sees on a slide to help diagnose the patient; diagnostically important elements should be observed, and embedded in a way which minimizes distortion during microtomy.

While protocol can vary from site to site, it seems to be the consensus that:

Sometimes a comment is added with special instructions for embedding (ie. RINKD = embed red ink surface down), so one should always check the cassette and corresponding specimen report for guidance.

Tissue carryover. It is important to wipe one’s forceps and heated embedding area between cassettes, and especially from one patient to the next, to avoid cross-contamination.

Quantity. If the specimen form denotes 4 pieces of tissue in the cassette, make sure there are 4 pieces before discarding anything! Small specimens can get stuck on the cassette lids – or, in the case of thin cores, within the sponges they are placed between.

One also has to be vigilant when opening biopsy bags, which are often used for small GI specimens. If opened too abruptly, the tissue can fly out!

As per our BCIT competencies, we have to embed a minimum of 25 blocks per hour, which wasn’t too difficult. Then I was informed the global average is 60 blocks/hr… don’t think I’m quite there, yet.

This band keeps popping up on my Spotify recommendations and I’m not complaining. Check out “In Between” by Can’t Swim!