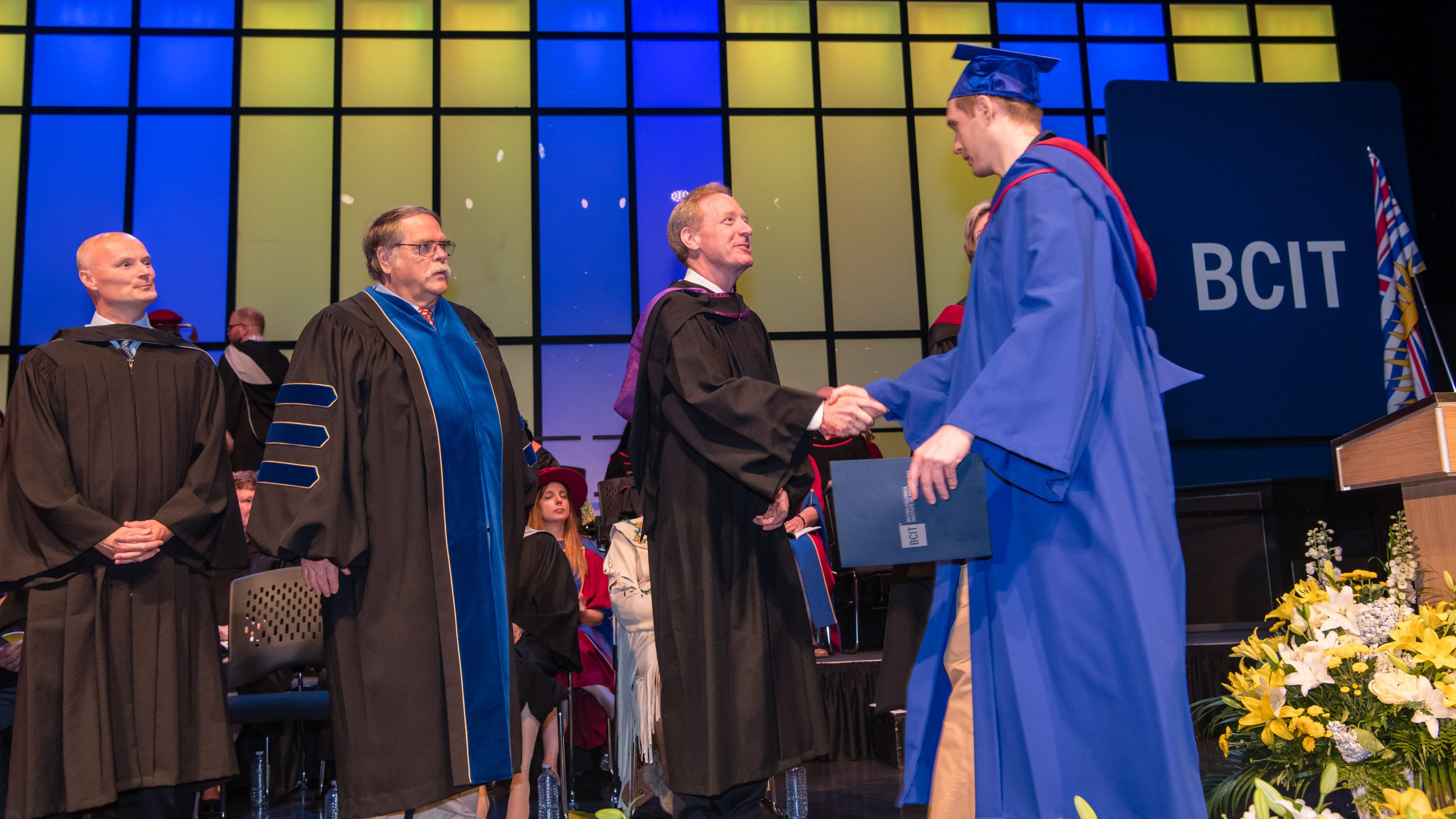 The president of Microsoft predicts that British Columbia’s entire economy will be transformed by the kind of advances in digital technology that Microsoft and the British Columbia Institute of Technology are pioneering in their ongoing partnership.

In a wide-ranging interview this week, Brad Smith said developments in the fast-paced field will affect not only students at BCIT and at other provincial educational institutions, but will also increase jobs and the prosperity of B.C.’s primary industries.

“I think if we look a decade into the future, the economy of B.C. is going to be much more of a digital and technology-based economy than it is today or was a decade ago,” Smith said prior to giving a keynote address at BCIT’s convocation ceremonies on Thursday. “I think it is very exciting for the future and the creation of new jobs and especially for those students who are mastering these new skills.”

Smith said the new digital technology is touching and transforming every part of B.C.’s economy, from healthcare and education to forestry and mining.

“The future of mining, agriculture and fisheries are all in part going to benefit from new technologies. That means there are going to be jobs in these sectors of the economy that require real expertise in digital technology.”

At the heart of this information technology are new advances Microsoft is pioneering in augmented reality, artificial intelligence and cloud computing, he said, adding that the key word to consider is “precision.”

“In agriculture that means that with very inexpensive sensors that can be planted in the soil and drones that can map acreage, farmers are becoming more effective and efficient in deciding where to plant and where and how to managed their acreage as a whole,” he said. “Already we are seeing in trials the use of this information technology increase production on farmers’ fields by 15 per cent.”

Microsoft is also partnered with BCIT to develop a first-of-its kind mixed reality curriculum. The company will help train students to meet the skill sets needed for careers in the field of digital media and entertainment. “We need people with the skills that the future is going to ask us to contribute. As we look at the students graduating from BCIT this week, these are clearly people who have the kinds of skills that are needed.”

Before his keynote address, Smith met privately with three outstanding students, who came away star-struck by the encounter with the senior Microsoft executive.

“I was surprised by how down to earth and friendly he was,” said Sean Wang, who graduated with a Bachelor of Technology in Computer Systems and now works for a local game company, Relic Entertainment.

“He shared with us certain tips for our careers. He pointed out how being enthusiastic for your work is kind of infectious and makes other people (around you) want to work hard.”

Stephanie Cosacescu, who graduated with a Diploma in Computer Systems Technology, said she was impressed by Smith’s advice to “hire happy people.”

“It was cool to see someone so influential looking for the soft traits or skills as well as the technical skills,” said Coascescu, who has already begun work as a software engineer at autoTRADER.

Danielé Lisi, who came to Canada from Italy to continue his studies in computer science and automation, said “it was refreshing” that Smith and Microsoft seemed to be looking for “passionate people” in a broad range of fields. Lisi, who has participated in hackathons and other extracurricular computer activities, said he would advise new students to get involved outside their classes, because it is a great opportunity to meet industry people and network.

During his convocation speech Thursday, Smith told graduates to consider themselves lucky. “You don’t get to choose whether you get to graduate during a period of economic prosperity or recession. Compared to the students who graduated 10 years ago, believe me you are fortunate. This is a good time to enter the workforce.”

Smith advised BCIT students that they need to master more digital skills, adding that people who can write computer code have an advantage over people who cannot. “But at the same time, even people who are deep into computer science need to learn about the broader world. As we call on computers to make decisions that previously were only made by humans, we need people to design AI (artificial intelligence) systems and computers so that they reflect the values of the world.”