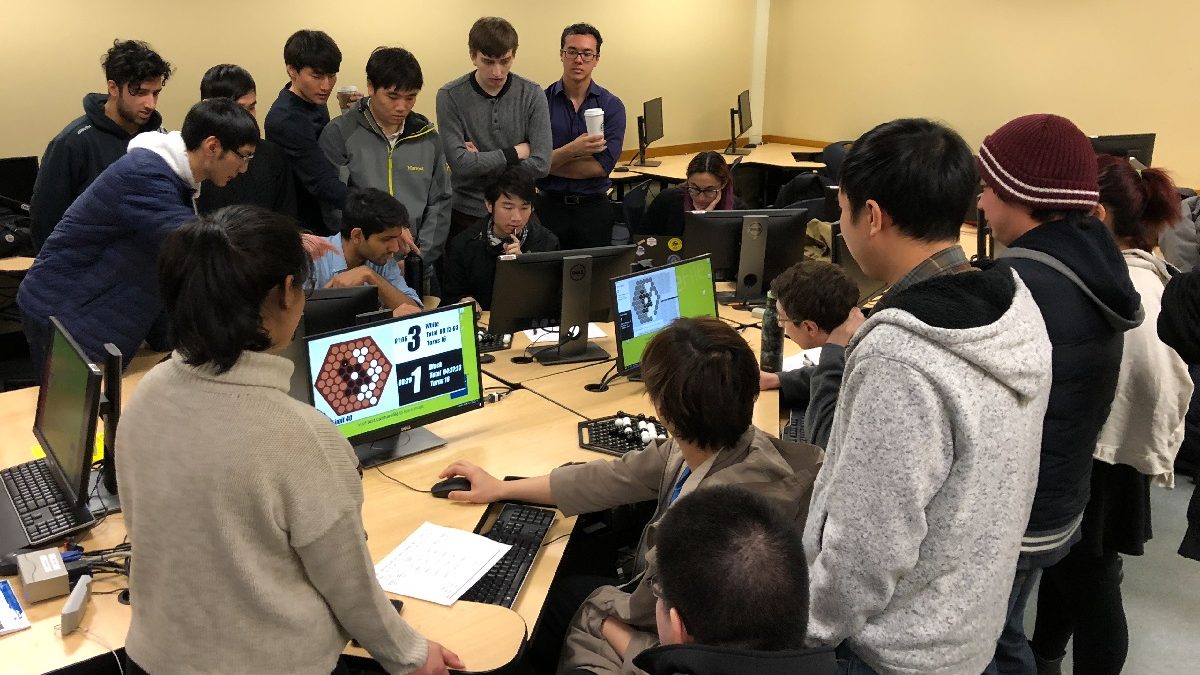 With so much learning packed into their final terms, some term three and four students have participated in numerous year-end project activities, pitches, and demonstrations.

Project week was also been peppered with the thrice-yearly Industry Sponsored Student Project Presentations, which are a central experience in CST. Student work on two different applied projects during their program, reporting to a real external client.

Ranging from a potluck-planning app to create community for client CityStudio Vancouver, to an Augmented Reality (AR) project that replicates a wound for health science students, the ISSP projects covered a lot of technical ground.

Humans attempt to beat the AI agent they created

Students in the newest CST Option, Artificial Intelligence and Machine Learning (AIML), delivered their first term-end project, an AI agent that can compete in the Abalone strategy board game.

Students were surprised at some of the moves that their AI agent came up with. In one case, the agent would start off playing aggressively to take an early lead in the game. It would then stay well ahead of the opponent but not deliver the final blow, at times making almost silly moves, until the end of match time nears. As they mused about it, student Artur Gordiyenko termed it “AI trash talk.”

“I didn’t think we’d be able to do something like this” admitted set rep Miranda Pattyn. “I’ve always wondered how AI for games worked, and it’s cool that we could produce this in one semester. The down side is, I’ll always be analyzing game AI from now on!”

In the end, after seven grueling hours of matches, the AI agent beat the human players 4W:1L, leaving the students, while proud of what they had built, to ponder upon how they failed to defeat their own creation.

“It is encouraging to see the students so engaged in applying AI to games in this project, and that they are looking forward to further exploring applications of AIML to other domains next term,” concludes Huang.

The third iteration of the CST Android app showcase was hosted by the City of New Westminster at the stunning Anvil Centre this term.

One of the winning apps enabled remote reporting of energy meters, while another addressed the issue of finding subsidized housing.

Dean Steve Eccles addressed the group and emphasized the importance of BCIT Computing partnerships that enable students to problem-solve real-world challenges and integrate them into the technology they’re learning.

At the same time, and not too far down the hall at the Anvil Centre, iOS students were demoing Augmented Reality (AR) that enhances visitors’ experiences at the New Westminster Museum.

Twenty-four students worked on the project which enables visitors to easily get visual directions to the Museum, and go on a virtual treasure hunt while learning about the history of New Westminster.

Have a project idea?

Project proposals from organizations and individuals are welcome year round – see if you have something that might be a fit.