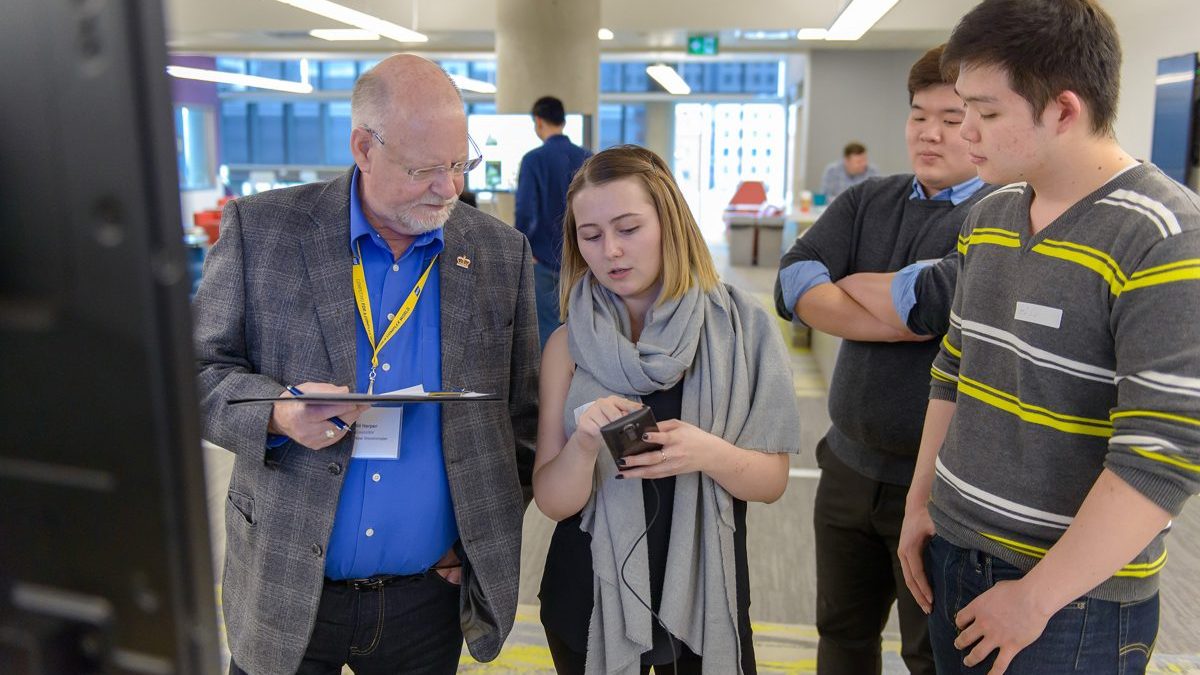 Computer Systems Technology (CST) students welcomed special guests for an end-of-term demo this week. In teams of two or three, students were tasked by instructor D’Arcy Smith with using City of New Westminster Open Data while developing an android app of their choosing.

The resulting apps ranged from games based off sewer system maps to safe walking routes to school. The apps impressed VIP guests and judges, including City of New Westminster Mayor Jonathan Cote, Councillors Bill Harper and Mary Trentadue, as well as City and BCIT staff.

Councillor Bill Harper told the students about the City’s focus on building more innovative open data, and said he really enjoyed seeing what the students had come up with. As he presented awards to the winning team, Mayor Jonathan Cote echoed the sentiment, praising the apps as well as admitting to enjoying playing the games. In fact, he and Councillor Trentadue got quite competitive in City trivia and other tests of civic knowledge. The team of municipal judges ultimately selected a heritage registry and walking tour app by the Droid Boyz team comprised of Kuanysh Boranbayev, Spencer Leslie, and Jonathan Heggen, as the most potentially useful.

The winner of the overall most impressive app was team CKK, made up of Shawn Kim, Gisu Kim, and Stephanie Cosacescu. Their app showcased public spaces. BCIT Computing Associate Dean Bethany Edmunds expressed her pride in the students’ focus on usability – articulating the needs of users while creating a functional and appealing app.

“It was such a fun and relaxed environment – and really rewarding to take a step back and look at what we’ve all been working on so relentlessly,” reported team member Stephanie Cosacescu. The fun that was had is evident in the great event photos taken by Matt Borck.