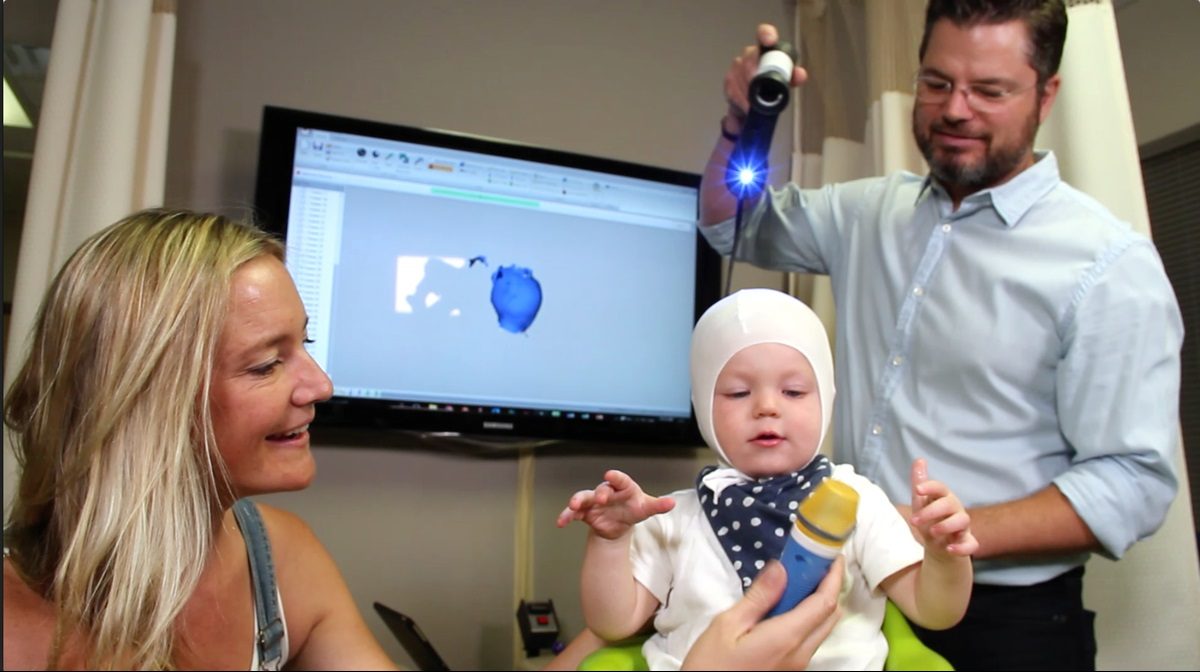 In a small office in the heart of Burnaby, BCIT Prosthetics and Orthotics Program Head Jason Goodnough is strapping a tiny, blue helmet onto the head of 9-month-old baby Alfred.

Don’t worry, this baby isn’t about to attempt any dangerous sports. The helmet (or cranial band) is a custom-made medical device designed to correct the shape of Alfred’s head.

Alfred, like many babies, has developed a flat spot on his soft head –  called plagiocephaly. Plagiocephaly is caused when a baby’s soft skull or face is flattened by pressure from their common sleeping position, sitting position, or by the how they were positioned in the uterus.

Sometimes, this flattening is minor and rounds out as the baby grows older — but if the flattening is more serious, a doctor may recommend a fitted helmet. Traditionally, babies would have to wear these expensive helmets 23 hours a day, for two to six months. And they couldn’t be fitted with a helmet until five or six months of age, because the traditional helmet is so heavy.

Enter Jason and the BCIT team. The SnugKap (an invention of Jason’s company HeadStart Medical) is the only baby helmet designed, made, and licensed as a medical device in Canada. It is created using 3D-scanning and printing technology, and eco-friendly materials.

The 3D-printed cranial band is lighter, thinner, cooler – and treatment can begin earlier, because it often only needs to be worn when the baby is sleeping. Early research that Jason and his team have conducted also suggest that this new method corrects head shape much faster and more precisely than the now-antiquated foam helmets.

Since the creation of SnugKap in fall 2016, Jason had treated over 100 babies using this new 3D-printed helmet method, with some as young as three-months-old. “Frankly, I can’t believe it took us this long to figure out a better way!” says Jason. “This is only the tip of the iceberg when it comes to 3D-printing orthotics and prosthetics. The ability for this technology to change lives is immeasurable.”

Baby Alfred has already made remarkable progress, and with any luck he’ll only have to wear the helmet for another couple weeks. At which point, his mom will just put the helmet in her city compost bin — it’s made from plant-based materials.