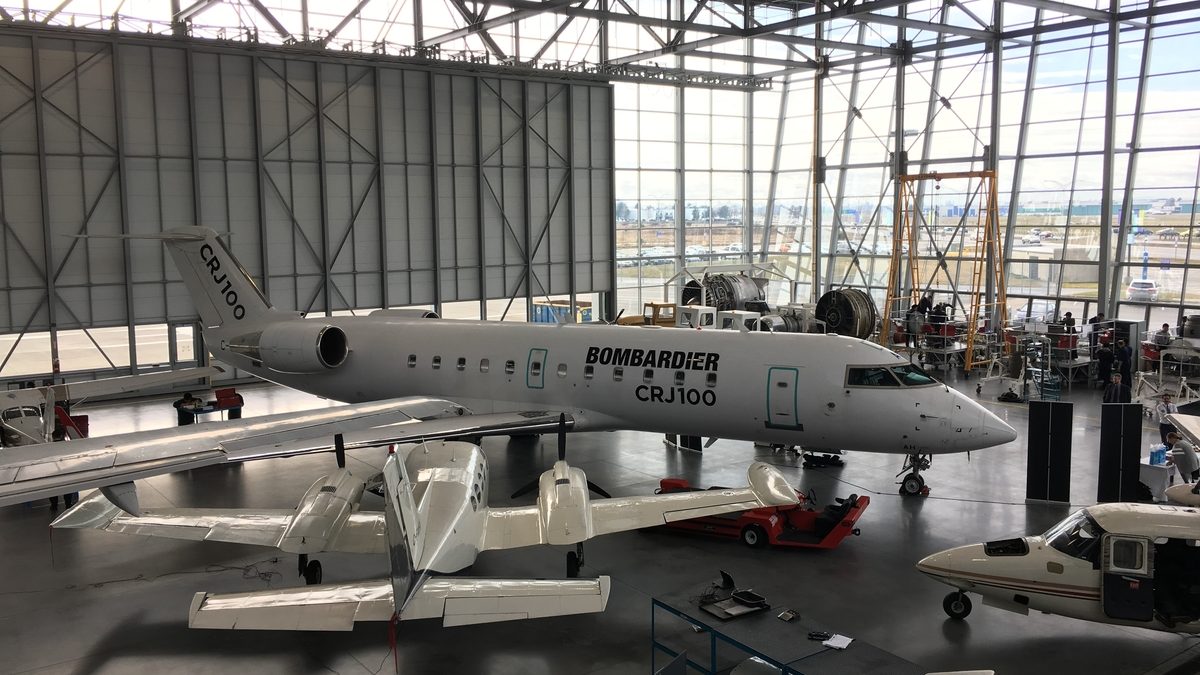 Montréal, February 28, 2017 – Bombardier Commercial Aircraft and the British Columbia Institute of Technology (BCIT) today announced that Bombardier has donated a CRJ100 aircraft to be used by the BCIT Aerospace programs. It is Bombardier’s first donation of a commercial aircraft to an educational institution and symbolizes the company’s commitment to the training of a skilled workforce and further strengthening of the aerospace industry in Canada.

The aircraft (Serial Number 7032) donated to BCIT, was originally delivered by Bombardier for airline operations in 1994, and spent many years in service across Europe before it was retired and transferred to the BCIT Aerospace Technology Campus. Launched in 1989, CRJ100 aircraft were the first models in Bombardier’s CRJ Series family of regional jets. Since their introduction into service, CRJ Series aircraft have become the world’s most successful regional jet program – revolutionizing regional air transportation along the way.

During a recognition event held today at the BCIT Aerospace Technology Campus in Richmond, BC, Jim Sorokan, Manager, Asset Management, Bombardier Commercial Aircraft encouraged the participating students to ardently pursue their dreams of joining the aerospace industry while developing their skills at BCIT training on the CRJ100 aircraft. In response, the students exhibited their commitment as they enthusiastically conducted demonstrations on the CRJ100 aircraft for the assembled audience that included faculty members and representatives of the BCIT Foundation.

“Industry partners like Bombardier are at the heart of the BCIT applied learning model,” said Paul McCullough, BCIT Vice President Advancement. “With their generous donation of the CRJ100 aircraft, Bombardier is equipping the next generation of aerospace professionals with an indispensable tool that will give BCIT students yet another competitive advantage upon graduation.”

“Bombardier considers the donation of this CRJ100 aircraft to the British Columbia Institute of Technology to be an investment in the ongoing development of highly skilled, aerospace workers,” said David Speirs, Vice President, Asset Management, Bombardier Commercial Aircraft. “We are delighted that students enrolled in aerospace programs at the Institute are using the aircraft to back-up their theoretical knowledge with hands-on experience. For example, students are able to experience how aircraft systems and units function, such as avionics functionality, engine start and idle runs, and auxiliary power unit functionality.”

About the CRJ Series Aircraft

The CRJ Series regional jets share commonality benefits that provide flexibility to operators and allow them to optimize their fleets to meet specific market demands. No other regional aircraft deliver this capability. Optimized for medium-haul regional routes, these aircraft can provide up to 10 per cent cash operating cost advantage over competing jets.

Each of the CRJ aircraft models offers its own distinct advantages. The CRJ100 and CRJ200 regional jets, which offer outstanding ownership cost, are ideal for opening new routes and markets. The CRJ700 regional jet is the lightest aircraft in its category, delivering impressive efficiency, performance and fuel burn savings, while the CRJ900 regional jet offers tremendous flexibility and is ideally suited for growing markets. The CRJ1000 regional jet, which has the highest passenger capacity in the family, delivers the lowest seat-mile cost in the regional jet market and burns up to 13 per cent less fuel than its competitors.

Since its launch, the CRJ Series family of regional jets has stimulated the regional jet market. In North America alone, it accounts for over 20 per cent of all jet departures. Globally, the family operates more than 200,000 flights per month.

The CRJ Series aircraft family includes over 100 owners and operators in approximately 40 countries. The worldwide fleet has logged over 45 million flight hours.

Bombardier has booked a total of 1,908 firm orders for CRJ Series aircraft.

For more than 50 years, the British Columbia Institute of Technology has been a catalyst for economic, social, and environmental prosperity in the province, the nation, and, increasingly, the world.

Since 1964, BCIT has taught and trained generations of experts, professionals, and innovators who have envisioned, created, evolved, and improved our country’s infrastructure, accelerated its economy, and grown its stature. Today, BCIT is reimagining the future of student access, teaching, and learning.

Its partnerships with communities and industry help to anticipate and outpace the forces of technological disruption and set its students apart in a competitive and changing world. BCIT’s proven record of applied learning and applied research, along with the breadth of its programs, offer an advanced training ground for the next generation of experts, and a wellspring of innovation and new capabilities for the future.

Bombardier is the world’s leading manufacturer of both planes and trains. Looking far ahead while delivering today, Bombardier is evolving mobility worldwide by answering the call for more efficient, sustainable and enjoyable transportation everywhere. Our vehicles, services and, most of all, our employees are what make us a global leader in transportation.

Bombardier is headquartered in Montréal, Canada. Our shares are traded on the Toronto Stock Exchange (BBD) and we are listed on the Dow Jones Sustainability North America Index. In the fiscal year ended December 31, 2016, we posted revenues of $16.3 billion. News and information are available at bombardier.com or follow us on Twitter @Bombardier.

Photos of the donated CRJ100 aircraft and of today’s recognition event will be posted with this press release at www.bombardier.com.

More information on CRJ Series aircraft is available in the BCA Media Hub
Follow @BBD_Aircraft on Twitter to receive the latest news and updates from Bombardier Commercial Aircraft.

Bombardier, CRJ Series, CRJ100, CRJ200, CRJ700, CRJ900, CRJ1000 and The Evolution of Mobility are trademarks of Bombardier Inc. or its subsidiaries.