During the summer of 2011, Jordan Ho, a third-year Mechanical Engineering student from UBC, performed experiments at BCIT’s Building Science Center of Excellence (BSCE). Jordan’s research project was to characterize the airflow characteristics of various wall panels that are found at BCIT’s Building Envelope Test Facility (BETF). This project is part of Dr. Fitsum Tariku’s Canada Research Chair research program aimed at advancing sustainable building design. Under the guidance of BSCE Director Dr. Tariku, an investigation into building envelope performance related to airflow was started. Ho was one of the four recipients of the Undergraduate Student Research Award (USRA) funded by the Natural Sciences and Engineering Research Council of Canada (NSERC). 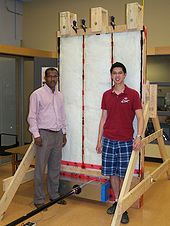 As energy efficiency becomes more important in our everyday lives, we must find ways to reduce our energy consumption while maintaining or increasing our living standards. One of the key disciplines where energy conservation plays a pivotal role is in building design. A significant amount of energy goes into keeping the environment inside a building comfortable for people. Probably the most fundamental part of the building environment is the air inside the building, so it makes perfect sense that building designers would desire a structure that will prevent much of that conditioned air from escaping. Understanding how air flows in a wall not only helps reduce energy losses, but also increases our knowledge of how moisture is transferred. Learning about how moisture is transported can help minimize the accumulation of condensation, proliferation of mold, degradation of organic materials, oxidation of metallic parts, transmission of energy, destruction caused by freezing, and reduction in the quality of the insulation.

Previous research related to airflow in building envelopes looked at factors such as the mechanics of ventilation, moisture conditions, air flow conditions, and building materials. However, none of those research projects characterize the airflow in insulation cavity of wall, especially at low driving pressures in the range of approximately 10 Pascals.

Before any findings could be made, an experimental apparatus needed to be designed, constructed, and tested before the necessary experiments could be performed. After building and outfitting the experimental wall apparatus with pressure and air velocity sensors, air was pumped into the apparatus and data was collected. Using combinations of insulation, sealant, and different slot configurations in the wall that promote airflow, the airflow characteristics for different wall configurations were analyzed.

The main goal of characterizing the airflow through the wall was achieved by developing curves that plot the driving pressure versus the airflow rate. An example of what the curve looks like is shown below. Other findings from the project include 1) using sealant and stapling the poly (vapor barrier) to the wall studs makes it more difficult for air to flow into another wall cavity and 2) the air velocity near the bottom of the wall is highly erratic. 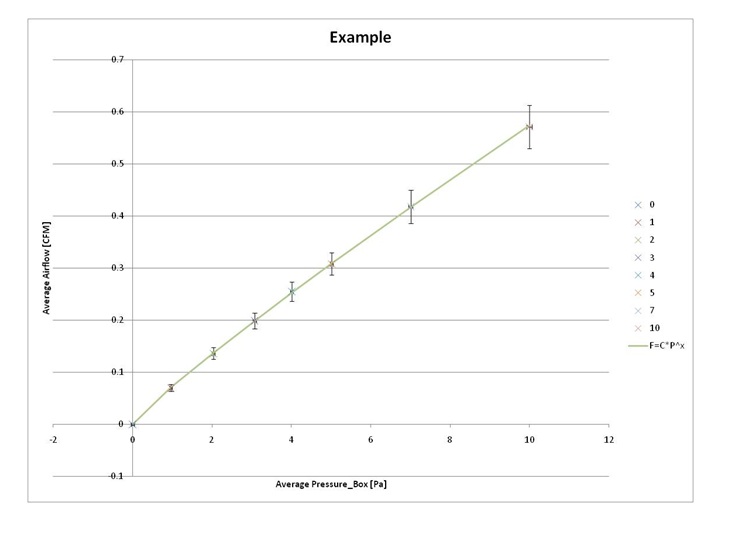 The success of the project would not have been possible without the aid of the NSERC and the Undergraduate Student Research Award, as well as Dr. Fitsum Tariku and everyone at the BSCE.