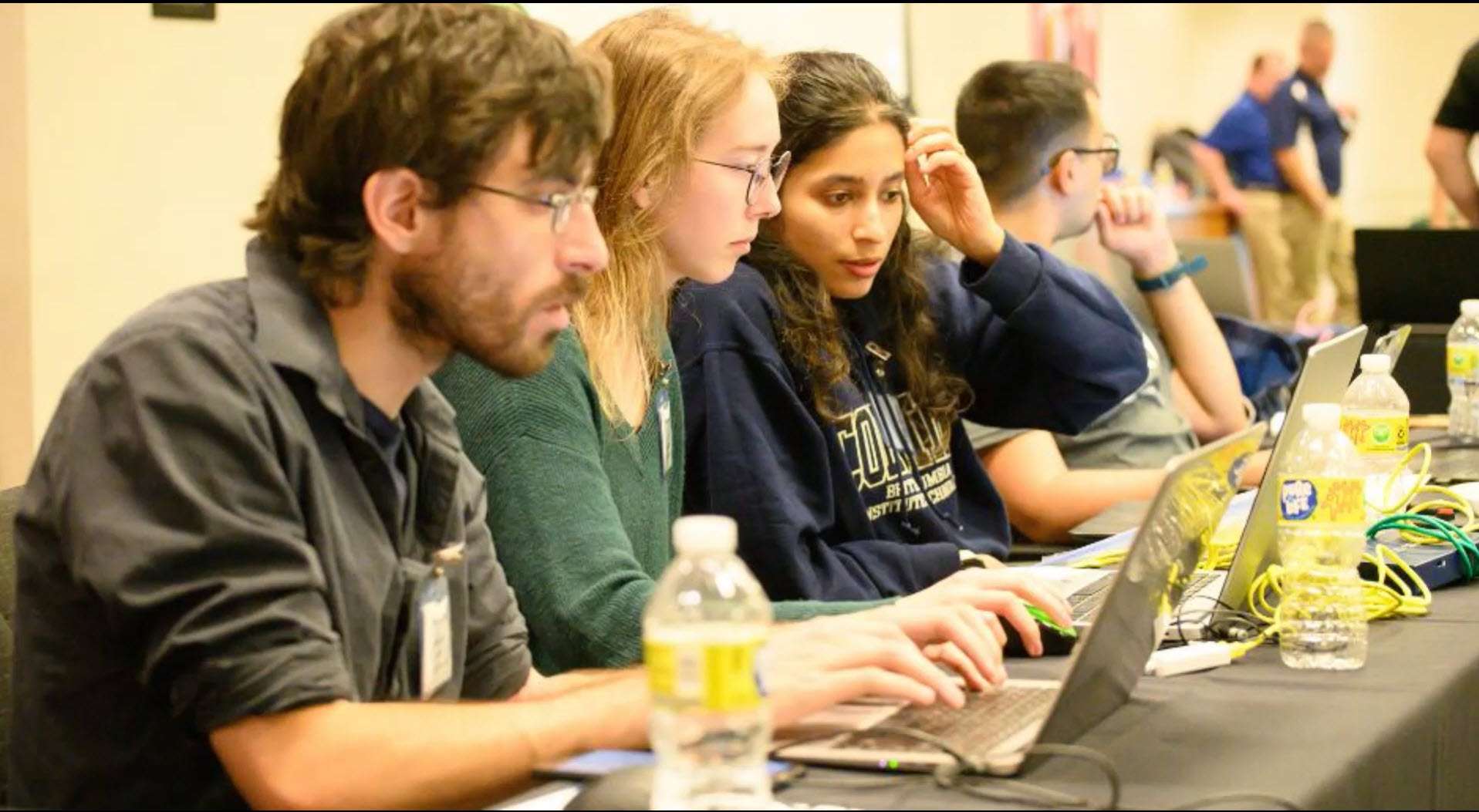 In recognition of Cybersecurity Awareness Month, students from 14 universities and colleges across North America competed on October 22 in St. Petersburg, Florida, in the annual ‘Capture the Flag’ (CTF) challenge organized by financial firm Raymond James, where they defended against potential hacking threats. It was the first time BCIT got invited to this event, and the team did not disappoint.

“Free food and free travel? Of course, I said yes to the invitation,” says part-time Digital Forensics and Cybersecurity Bachelor of Technology student Brandon Wittet jokingly. “But in all seriousness, I was honoured to be invited by program coordinator Raymond Yu for the CTF event. You don’t say no to opportunities like this because they don’t come around that often. Getting the chance to test myself against other schools in the United States and getting a sense of where I stand compared to other students, I thought it would be really fun.”

Besides Brandon, students Raeann Sherman, Gary Khodayari, and Ashvan Wal also immediately said yes when Raymond invited them to the event. A fifth student was also supposed to compete but unfortunately got COVID shortly before the event.

Ashvan: “Apart from hackathons, which are more focused on coding, there aren’t that many cyber programs in Canada, so you never really get the opportunity to compete. I was excited to see how it works.”

“We tried to go in with no expectations, apart from representing BCIT to the best of our abilities.”

The students were selected based on their academic abilities in different classes. After a few training sessions where the students identify their strengths, such as file analysis, networking, and cryptography, they head off at 3 am for YVR Airport to catch a flight to Florida.

Raeann: “We weren’t sure what to expect because we had no idea how good the other schools are. So we tried to go in with no expectations, apart from representing BCIT to the best of our abilities.”

“How do you prepare for lock picking?”

The team faces an 8-hour-long challenge in which they have to compete with 13 other American colleges and universities. Gary explains the concept: “CTF simulates real-world scenarios where your organization gets digitally attacked. You’re being given files where you must find the hack, a hidden flag. Each time you find the flag, you receive points and progress to the next challenge.”

In addition to the main challenges, there are also ‘mini-challenges’ involving, for example, an exercise challenge where you had to do push-ups, a lego-challenge, and lock picking.

“We didn’t expect these side challenges,” admits Ashvan. “Even though lock picking has to do with security, we didn’t prepare for these ‘physical security’ challenges. We could have performed better if we had known more about this beforehand. But then again, how do you prepare for lock picking?!”

“A lot of them are Master’s students, and we still beat them.”

As the day progresses, the Program Coordinator serves as their coach. “Raymond did a great job in supporting us,” says Gary. “He cared a lot and was really proud of us. He kept us in a good mood and played a huge part in our performance.”

And their performance was quite remarkable.

The students manage to tie for first place with four other teams. It turns out that the side challenges were crucial because they decided the winner in case of a tie, eventually shooting down the BCIT team to fourth place and narrowly missing out on the prize money.

“We were tied for first place when it comes to the challenges that actually matter,” says Brandon. “We managed to beat four colleges and six universities. A lot of them are Master’s students, we were short one team member, and we still beat them.”

Gary: “After the event, we learned that many teams have dedicated CTF clubs with funding and coaches. And the team [University of Florida] that won has done the challenge twice before, so it’s obvious that our competitors took it very seriously and came well prepared. That we stack up so well against the American schools means something, and I think we can be proud of ourselves.”

Although the team would be keen to join the event again next year, they won’t be students anymore by that time.

This doesn’t mean they don’t want to be involved anymore. “We went in the competition to perform well and get invited back next year,” explains Ashvan. “I think we definitely have accomplished that. Now that we have this experience, we’d like to pass down the torch and support the next team.”