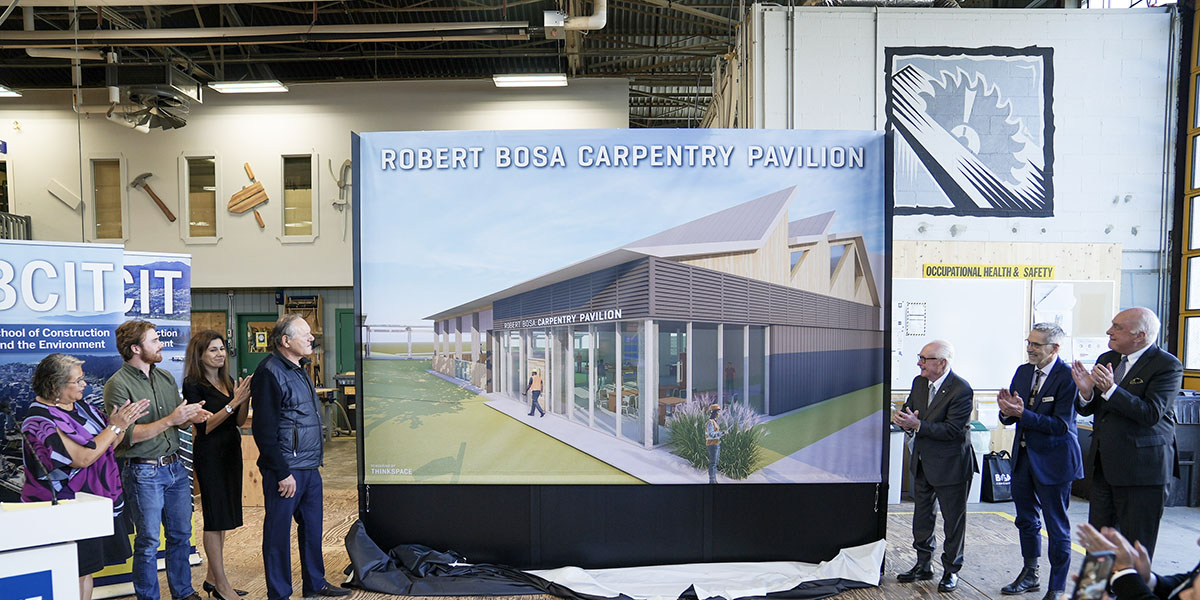 BCIT recently recognized Bosa Construction’s gift of $4 million, one of the largest donations to the INSPIRE Campaign. The generous contribution, under the direction of Robert Bosa, will support construction of a new mass timber carpentry building. The Robert Bosa Carpentry Pavilion, named in honour of its donor’s legacy, will be part of the new BCIT Trades and Technology Complex (TTC) which has been designed to provide future students with access to the cutting-edge technology and applied learning environment needed to meet the demand for the estimated 85,000 new trades jobs expected over the next 10 years in British Columbia.

Robert Bosa’s generosity and commitment to trades training at BCIT date back several decades and is rooted in his belief in building opportunities and investing in the community. A carpenter by trade, Robert grew from humble beginnings, with his roots in construction paving the way for every step in his career journey. Known as a values-led leader with strong family ties, several of Robert’s children have become industry leaders in their own right, building upon the foundation that he created to establish a fully integrated group of companies focused on development and asset management. Regarded for leadership, quality, and integrity⁠, they include trusted brands Bosa Properties and BlueSky by Bosa Properties, along with the charitable division, Bosa Family Foundation.

“This is a full-circle moment for our father, Robert, who has committed his life to his trade, pursuing opportunity, and creating opportunities for others. Our earliest life lessons stem from his work ethic, his pride in excellence, and his commitment to doing your job right—and it all started with his passion for carpentry,” said Colin Bosa, CEO, Bosa Properties. “As much as our father is a symbol for excellence in construction, he equally stands for community giving. And now, he is honoured to underscore this commitment to giving through a partnership with BCIT that he hopes will inspire and benefit future generations of tradespeople.”

Robert Bosa, joined by real estate development leader David Podmore, OBC, Chair, President, and CEO of Concert Properties and Chair of the INSPIRE Campaign, and Paul McCullough, Interim President of BCIT, officially announced this transformational donation to BCIT and unveiled plans for the new building dedicated to carpentry which will foster the next generation of tradespeople. The new 715 m2 (7,700 sq ft) mass timber building will serve as a modern carpentry learning and teaching hub featuring the latest AV technology, safety-optimized work zones, and acoustically designed work areas. The net-zero ready building will meet step 4 of the Energy Code and targets to be Rick Hansen Foundation Accessibility Certified.

At the event, Robert passionately shared his career journey from his early days as a young carpenter-in-training to today as the head of one BC’s most respected construction companies. In an intimate setting, the event was attended by Robert’s legacy employees who have worked alongside him for decades, colleagues, close friends, and family. His daughter Sylvia Bosa, Director of the Bosa Family Foundation, paid a heartfelt tribute to Robert, thanking him for setting a inspiring example of integrity, excellence, and work ethic to not only the family but also those who have had the privilege of working with him. Robert concluded with sage advice for the students in attendance, urging them to find a mentor to help them “learn the ropes” early in their career.

About Bosa Construction and BCIT

The partnership between Bosa Construction and BCIT dates back to 1998, with the company leading the way as one of the founding donors of the BCIT Trades Discovery program and contributing to endowments and student awards in support of the School of Construction and the Environment. In addition, since 2016, Bosa Construction has been actively involved with the BCIT Student Association – participating in annual careers fairs, promoting industry opportunities, and mentoring the next generation of construction leaders. Backed by skilled trades and construction professionals, Bosa Construction directly employs over 200 specialized tradespeople in the Lower Mainland.

About the BCIT Trades and Technology Complex and the INSPIRE Campaign

The Trades and Technology Complex is supported by the INSPIRE Campaign, the largest fundraising initiative in BCIT’s history. A showcase for the future of learning at BCIT, the $220 million complex, for which the Province of British Columbia provided $136.6 million, will be comprised of nine new or renewed buildings featuring state-of-the-art workshops and spaces to empower collaboration and innovation.

Focused on raising funds for three pillars—Access and Inclusion, Teaching and Learning Innovation, and Campus Redevelopment—the campaign is creating a new future at BCIT as a destination for applied learning. Through INSPIRE, BCIT Foundation is helping today’s students become tomorrow’s leaders and continues to receive strong philanthropic support from industry, alumni, and individuals who recognize the importance of BCIT to the economic prosperity of BC. Together with government, industry partners, and alumni and donor support, the campaign has raised more than $100 million to date. Learn more about the INSPIRE Campaign, including ways to join in building a strong and impactful community of philanthropy.

For nearly 60 years, the British Columbia Institute of Technology (BCIT) has been delivering flexible, relevant, and future-proof education that prepares learners to provide applied solutions to industry challenges. As one of BC’s largest post-secondary institutes with five campuses, more than 300 programs, and over 45,000 students enrolled each year, BCIT connects education, industry, and government in building an agile workforce with sustained and meaningful impact. Learn more at www.bcit.ca