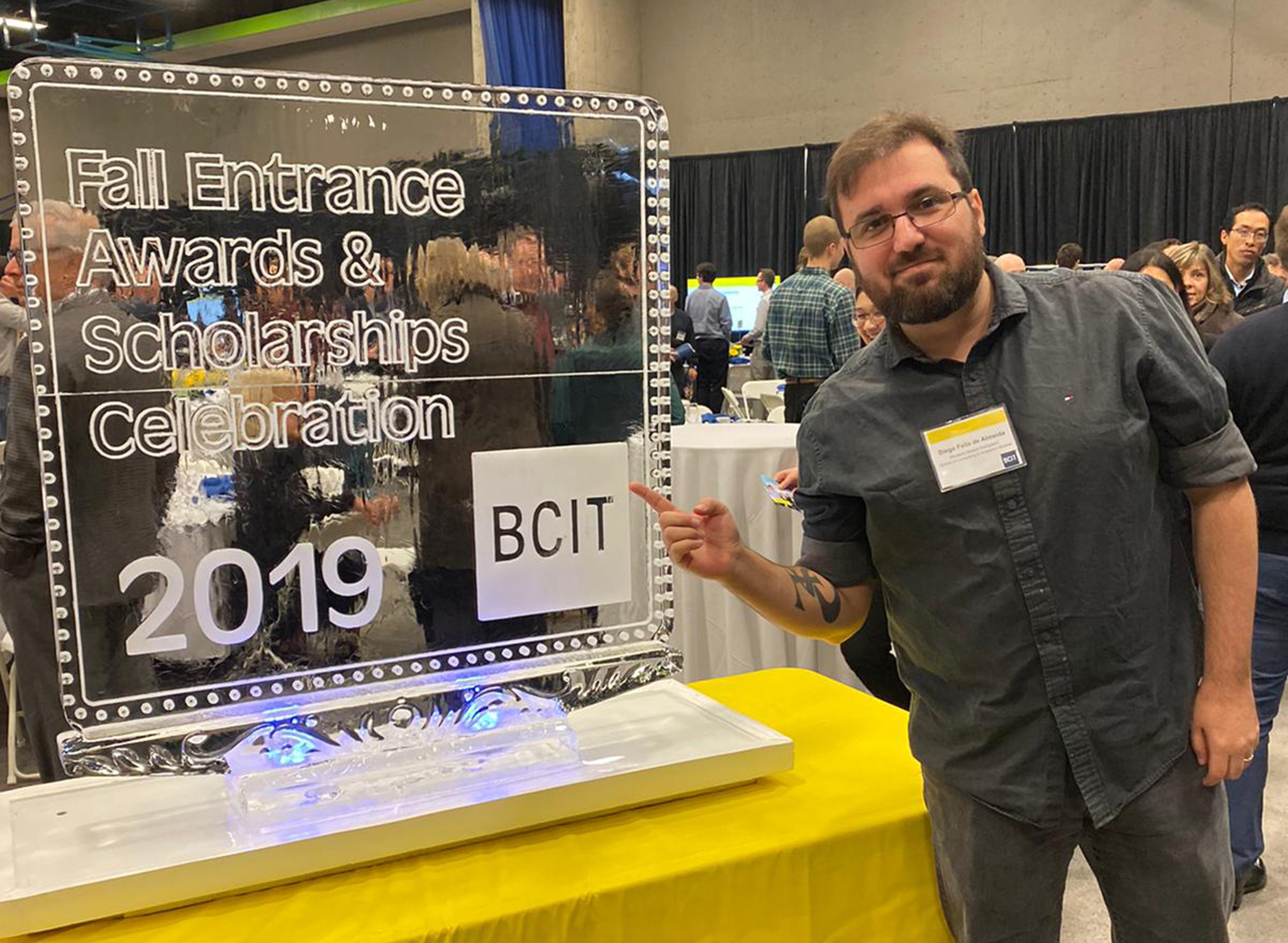 A significant part of the Computer Information Technology (CIT) diploma is the Industry Sponsored Student Projects (ISSP) program, where students take on real-life challenges. Diego Felix experienced both roles: as a student and now as an industry partner. “The ISSP allows me to work with students and discover their potential at an early stage which makes it a great recruitment tool,” says Diego.

The Brazilian native already had a considerable career under his belt when in 2017, he and his wife decided to relocate to Canada. “We didn’t want to live in Brazil anymore, so we started researching ways to build a life in Vancouver,” says BCIT alum Diego. Ten months later, the couple took their seats on an airplane heading north.

One of the ways to get a foot in the Canadian door was to study, explains Diego. “I wanted to do a program that would sharpen my software skills since my job at the time wasn’t very technically driven. And it was important to me that the program was industry-oriented rather than gaining academic experience. I actually wanted to learn things.”

“I knew BCIT had a solid reputation”

The idea of enrolling in BCIT came to mind, and after reaching out to his network, the decision was clear. “I never heard a bad thing about BCIT, so that’s when I knew BCIT had a solid reputation,” says Diego, who went on to apply for CIT. “I was always a Windows guy, so by working on topics like networking and Linux, I wanted to push myself out of my comfort zone and make the most out of my learning.”

Although BCIT is known for its intense education and heavy course load, Diego pushed himself even more by adding extracurricular activities to his plate. He took on peer tutoring one day per week, and he kept working remotely part-time for his former company in Brazil.

“We had money saved, but I still had to work to make ends meet,” says Diego. “I definitely went through some rough patches. Sometimes it was just too much, but luckily I somehow managed to make it work.”

“Thomas Lane was the best teacher I ever had”

Interestingly enough, the topics that should have been the hardest on paper were the ones Diego excelled in. “My best education experience was during the Network course given by CIT Program Head Thomas Lane. He was the best teacher I ever had. He made his classes very interesting, very well thought out, and he blew my mind with his knowledge.”

ISSP as a recruitment tool

On the other hand, the two ISSP terms — usually the pinnacle of the student journey, engaging in a real-life challenge given by industry — were relatively uneventful for Diego.

“Because of my work experience,” explains Diego, “I am used to working in a scrum format, dealing with clients, managing expectations, etc. I was given the possibility of skipping the mandatory second ISSP term, but I decided to do it anyway since I did notice that it helped to improve my English.”

Although the ISSP experiences weren’t as valuable to Diego as to the average CIT student, it proved to be very beneficial, albeit a bit later and in a different way.

After graduating, Diego found a job through a former classmate who put in a good word for him. After five rounds of interviews, he started working as a Web Software Developer for PDFTron, specializing in document processing technology.

“When I started, we had about eighty employees,” says Diego. “Now, eighteen months later, we have tripled in size, so hiring people is an essential part of our company at the moment. I know from experience how hard it is to find employees out of the blue, and the recruitment process is expensive.”

“And that’s where the ISSP comes into play for us. It’s a valuable tool because it gives you a chance to get acquainted with the education system, an opportunity to work with students, and discover their potential at an early stage”.

“I was surprised how little effort the ISSP required from me”

Diego pitched the idea to his team lead, and he didn’t need much convincing. At the time of writing this article, Diego is wrapping up the term that lasted thirteen weeks and involved eight students. “I was surprised how little effort the ISSP required from me, which amounted to less than an hour a week.”

“We gave them a useful but not critical project,” explains Diego. “Our office doesn’t fit everyone, so we wanted a desk and room booking system. Right from the start, I made it clear to the students that it could be a win-win situation: ‘Show me what you’ve got, and we might be able to offer you something in return.’”

“Even though the project hasn’t been finalized, and we’ll opt for another ISSP term, I like the input very much. We’re considering giving four students either an internship or a co-op position.”

And as far as his own career path, Diego cannot be happier with moving to Canada. “Luckily, it has been a lot less busy since I left BCIT!”, says Diego jokingly. “And even though it’s obviously a lot colder here, life has been treating us really well.”

The next ISSP term starts in April 2022, where Computing students will take on about 70 projects. If you have an IT project that needs a push to get it jumpstarted or finished, consider working with BCIT Computing students. ISSP is a low-cost way to support your industry IT projects, and it’s free if you are a non-profit.