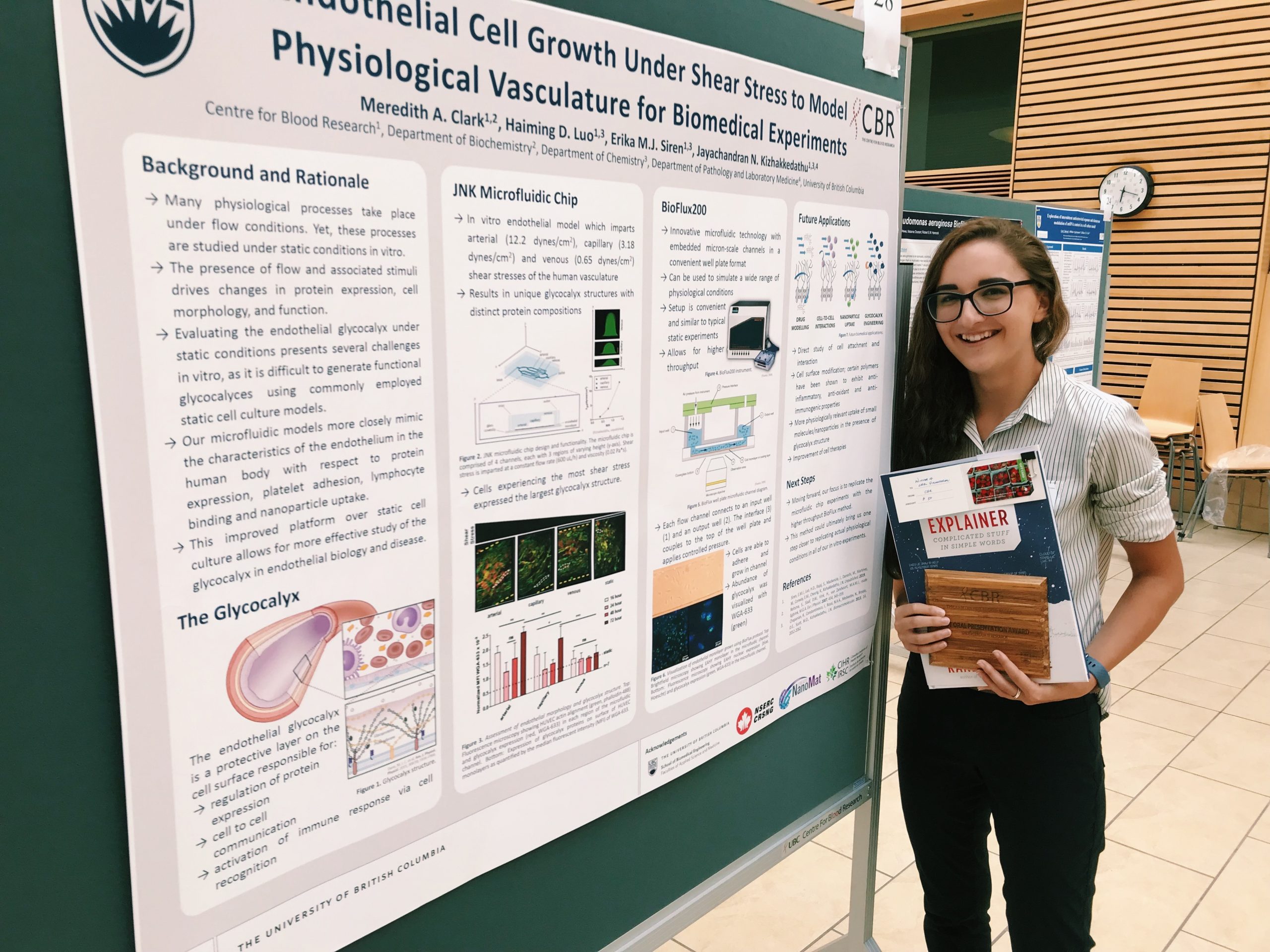 “I always knew that I wanted to go into science. But I also knew that I wanted to have a lot of variety during my undergrad, and ideally after graduation. And that’s what really attracted me to this program. You get all your theoretical knowledge from UBC, but then you go to BCIT, and you can apply all that knowledge. For me, it’s the best of two worlds.”

“You initially get a year of general science at UBC,” says Meredith, “But in the second year, you specialize and then it’s a 50/50 split between studying at UBC and BCIT.”

When asked how her experience has been so far, Meredith answers, “Awesome”.

“I remember feeling kind of lost in the first year, sitting in a lecture hall with three hundred other students. But when I started the second year, there were only sixteen students. And now, at the end of my third year, there are only eleven of us, and everyone has gotten really close, so it feels like a family. We even got this group chat called ‘Forensics Fam’, which is still very much alive, despite the pandemic and not seeing each other in-person that much.”

Meredith credits the small class sizes at BCIT to have supported her learning. “Science degrees are difficult. As it’s an honours program, the guidelines are even stricter. You need to have, for example, a certain average, and you can’t fail a course, so that makes it more challenging. But having this family and support, including being able to talk to our BCIT instructors make it a lot easier.”

“In my first year at BCIT – the second year overall – the first course was an introduction in forensics. Every week the instructors brought in these incredible guests with incredible titles, like the Head Constable Vancouver Police Department and the Team Leader, RCMP National Forensic Laboratory Services. One week, after the forensic pathologist at Vancouver General Hospital had given his lecture, we went up to him to talk and ask him if it would be possible to shadow him. He quickly agreed and gave us his contact information.”

“So the next week, we were participating in an autopsy. It didn’t smell good, but I also realized that it was one of those experiences that not everybody gets to experience. Who can say that they held a human brain in their second year of their undergraduate?”

BCIT Co-op program: the value of an applied education before graduation

The Honours program speeds up the pathway for students who traditionally complete a four-year Bachelor of Science degree at another institution before coming to BCIT for Forensic Science education – a process that can take more than six years.

But Meredith doesn’t value the acceleration aspect too much. Instead, she appreciates gaining valuable work experience before graduating.

“It’s the classic catch 22: you need the experience to get jobs, but you need a job to gain experience. A lot of people that I talk to hesitate going into Co-op, for example. They want to graduate as quickly as possible and get out of there. I never really understood that, because, when you graduate, you’re going to work anyway.”

Even though Meredith is only 20 years old, she’s already built an impressive resume.

After her second year, she applied for an Undergraduate Student Research Award (USRA), which enabled her to work at the Centre for Blood Research (CBR) for four months during the summer of 2019.

“Being in a research lab is quite different from a teaching lab. I learned how to culture cells and use many instruments that we don’t necessarily get hands-on experience with in school. After one month of training, I was on my own, conducting my own experiment. It was pretty neat.”

At the end of the summer, Meredith presented her work (59.45 minutes), and it even won her the presentation prize. “That’s the great thing about BCIT; we’re not only getting science but also communication – Thank you, Laurie, you were amazing! – and business management courses. BCIT really stresses how to communicate the science, not only: ‘here is the science, go learn it’.”

“That’s the unique thing about this program; you can do it all!”

Meredith loved it so much at CBR that she continued working there part-time while going to school. Even though she already has a considerable amount of work experience under her belt, Meredith wants to broaden her horizon even more.

“I could continue with my fourth year and graduate next summer, but the idea of doing a Co-op for me is getting as much experience as I can. I could have stayed with CBR, but I felt I learned as much as I could there, and I wanted to branch out a little bit.”

“I absolutely love it here. I am part of the Bioconjugation team doing antibody drug conjugate research for oncology clinical trial research. Basically, we do cancer research.

It is super rewarding because we what we do helps people. Sometimes we get a letter from a patient, thanking us, which brings everyone to tears.”

Meredith will work at Zymeworks until the summer of 2021. The only thing that’s left between working and graduating is writing her thesis. Does she have any idea what she wants to do?

“The cool thing about our degree is that when we graduate, we have such a variety of things we can do. It prepares you well for pretty much anything, even Medical school or Law school. Having all of this lab experience and research experience though, it definitely pushes me towards the research side of things.”

“I’ll probably do a masters – maybe overseas, once COVID is done – and perhaps a Ph.D. But then again: working in a forensic lab interests me as well. That’s the unique thing about this program; you can do it all!”

2 thoughts on “BCIT Combined Honours in Biochemistry and Forensic Science student: navigating the way to success”

Leave a Reply to Arv and Sharon Witt Cancel reply