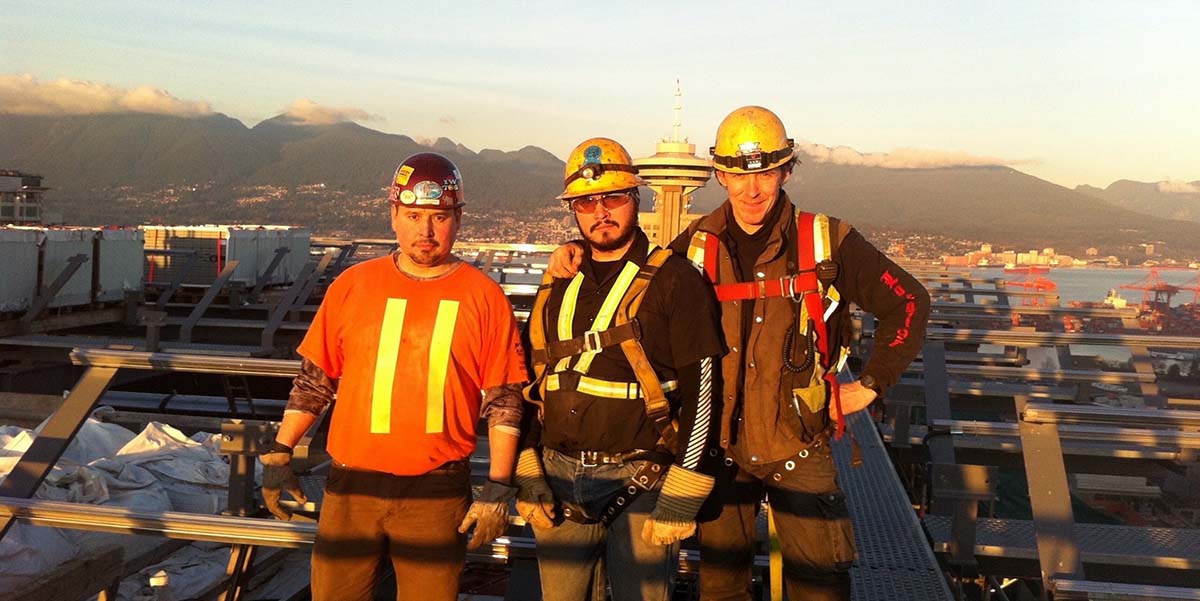 “I’d like to see our people get an opportunity to live a better life, to be able to take care of their families,” says Brandon Darbyshire-Joseph, an Indigenous BCIT Ironworking alumnus. “I’m a big believer that every generation can do better.”

Brandon’s passion for creating positive change was forged from a family history pitted with challenges. His grandmother was a residential school survivor and lived with the effects of it, his parents divorced when he was a teenager, and, as an Indigenous child, he learned that racism was just a fact of life.

Through it all, Brandon saw firsthand how an education and hard work open up opportunities, transform lives for the better, and have the ability to lift up the lives of a community. His father was a carpenter and the first Squamish Nation member to earn his BC Certificate of Qualification in the trade, while his mother earned a bachelor’s degree in psychology as well as a law degree. Seeing the value of a post-secondary education through his parents, Brandon went to BCIT to complete the Ironworker program in 2005 and, in 2008, became the first First Nations person in BC to attain the Red Seal certification.

He says BCIT taught him to strive for excellence. With gratitude, he recalls now-retired steel trades instructors Bill Watkins and Ron Rollins, for their unyielding high standards: “They didn’t beat around the bush. They pushed and supported you to make the grade. In turn, this helped me so much more in the field.”

Brandon was an ironworker for 12 years, and he encourages more young people from Indigenous communities to consider it as a rewarding career.

“I advocate for people to get their certifications, so they can be a fully qualified tradesperson in any field of work that they choose,” he says. “With all my years in ironworking, I’ve had good benefits, and built pretty good pension for my family. I’m hoping that more of our people have the same opportunity to gain their independence, and have a great career, not just a job.”

When Brandon worked as an ironworker, and, through advancement, he gained great experience in the trade—all of which serves him well in his most recent role as an elected member of the Squamish Nation Council.
“One of the biggest responsibilities of council is to create opportunities for our membership through education, culture, sports…every avenue,” he says. “If we don’t do it, nobody else will.”

With the other council members, Brandon is excited to be working on restructuring some of the administrative departments, and building new facilities for sports and housing. He hopes to make his community a better place for everyone. And it all started with the birth of his daughter Eden, followed by two boys Steele and Thorin.

“Both my partner and I decided to change our lives for the better, bringing our children up in culture and family so that our kids could have more than we had,” he explains. “None of this could have happened without the support of my spouse Tishia Baker. We would like to see that for our whole community.”

Learn more about BCIT’s Ironworking program and the School of Construction and the Environment.

Main photo above: Brandon Darbyshire-Joseph (centre) on a job site with two coworkers