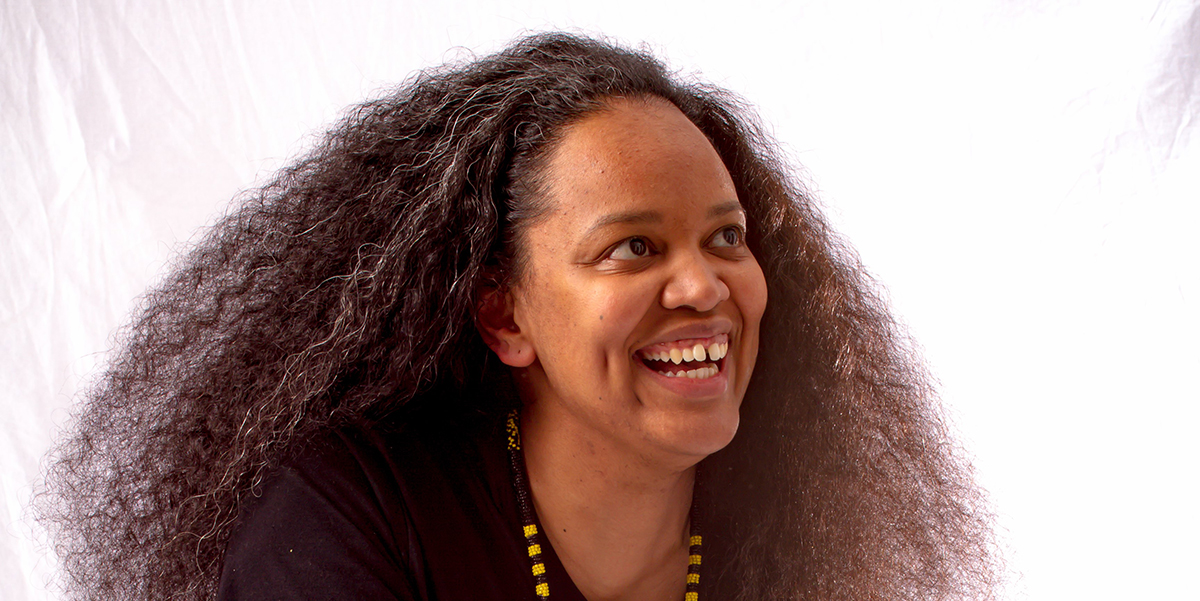 “My being at this table is a really big deal,” says Orene Askew, BCIT Radio Arts and Entertainment alumna and DJ. “I mean, someone like me—a mixed black and Indigenous two-spirited woman—sitting here.”

She’s talking about the 18-ft, honey-coloured cedar table, hand-carved by Indigenous artist Xwalacktunn (Rick Harry). It’s where the elected 16 Squamish Nation council members convene to make decisions on how to protect and grow their community.

Each place at the table features a carved eye symbol, which represents what the council is there to do: to see beyond. Nséyxní7tm (protection), which is represented by 16 eyes on the outer edge, signifies each council member being watched by their ancestors, the people, community, family, and most of all themselves. It reminds them to have honesty and integrity in the decisions made at the table.

In 2017, Orene was elected to the council and proudly sits at this table with other leaders to help shape the future of the nation.

“I didn’t expect to be elected,” she says, recalling election night. “I had been preparing my losing speech before the results were in, to be honest!”

While she was surprised to have been elected, she isn’t surprised by what she and the council have achieved together since. Their many accomplishments are a result of their commitment to progress, inclusivity, and unity.

Just this past December, the Squamish Nation council, along with its members, approved the $3-billion Sen̓áḵw housing project, which will see 11 towers with 6,000 units built on reserve land in Vancouver’s Kitsilano neighbourhood. Last year, the council approved and installed its first rainbow crosswalk at Capilano and Welch in West Vancouver.

“For the past two years, with the help of our staff and health department, we’ve put a float in the Vancouver Pride Parade and this year will be our third,” says Orene.

In 2019, she became the first-ever Squamish Nation member to be named grand marshal of the iconic parade. As a two-spirited (a masculine and feminine sexual identity exclusive to Indigenous culture), mixed African-Indigenous woman, Orene says she will never forget the honour. It represented the community’s progress on inclusivity that she didn’t always experience growing up.

Learning from the past

One of four children, Orene grew up on a reserve, raised by her hard-working single mom.

“I wish I’d had a role model who looked like me,” she says about her youth. “I was Native but I didn’t look Native. I was just different from everyone else and I didn’t always feel accepted and it was hard.”

That’s why Orene is passionate about sharing her experience with young people, whom she says are under incredible pressure to fit in, especially in the age of social media. She speaks regularly to youth in her community and to students at BCIT. Orene says she wants to encourage students to embrace their diversity, to see their uniqueness as a strength, and to have the courage to make a difference.

Orene says the BCIT Radio Arts and Entertainment program helped build her confidence—something that is foundational to her work as a Squamish Nation councillor, DJ, and motivational speaker.

“At BCIT, I took a lot of courses in the program,” she recalls. “All the broadcasting production stuff, everything you need to know to run your own business including invoicing, and even yoga to learn how to speak with an open palate. But the most important thing I learned came from my Broadcast instructor Dennis O’Neill…and that was how to listen.”

Orene’s unique life experience, confidence, and her sharp ability to listen help her connect with the young people she’s passionate about reaching.

“I want young people who are struggling to know that it’s not permanent and that they can succeed,” she says. “But sometimes, you have to do what you’re afraid to do in order to go where you want to go.”

Learn more about the School of Business, the Broadcast and Media program, and the BCIT Radio Arts and Entertainment program.