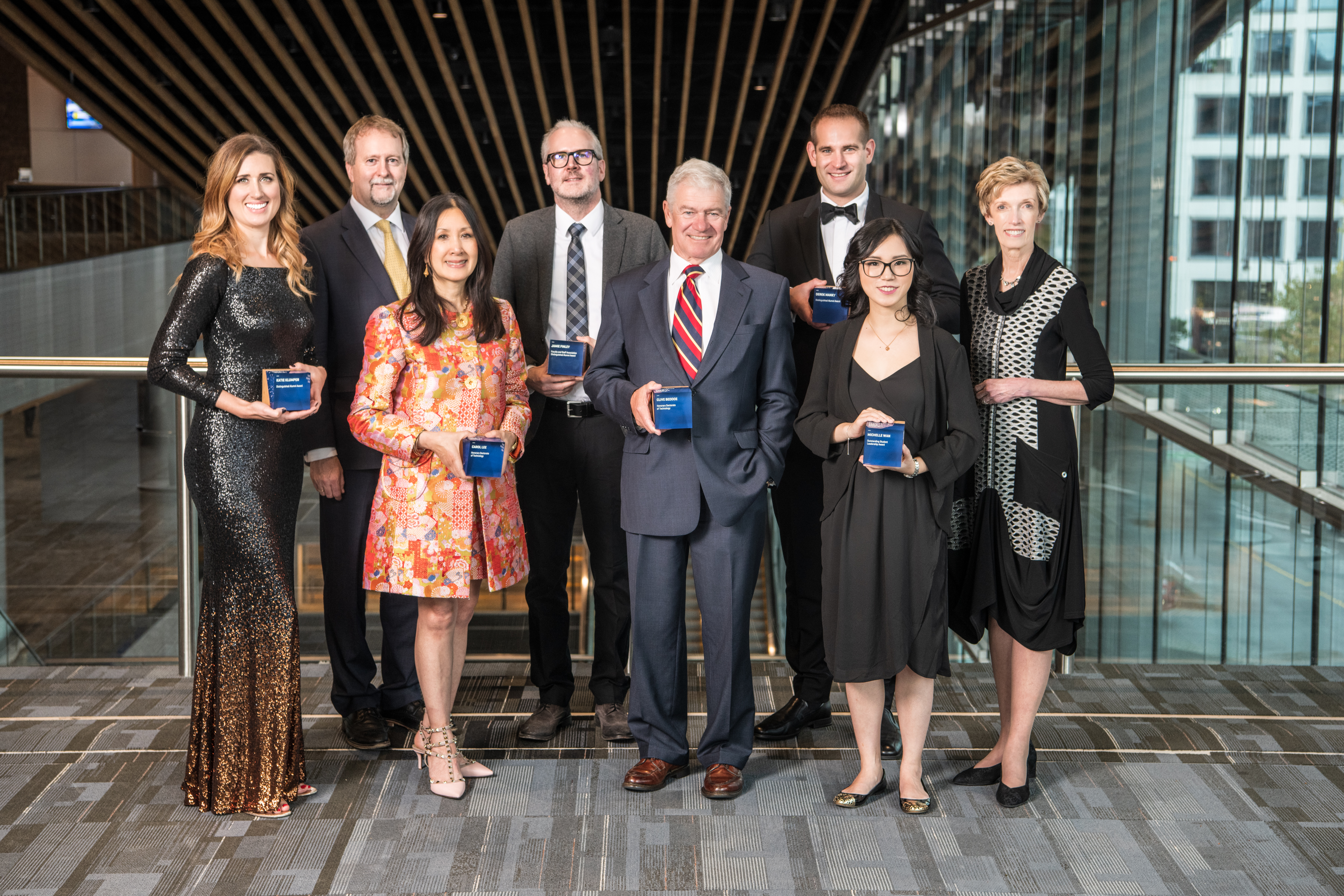 Our honorees embody the values of BCIT and, through their bold leadership and outstanding achievements, inspire others to follow.

Clive Beddoe is a founding shareholder and Chairman of the Board of Directors of WestJet airlines. In September 2007, he was appointed WestJet Chairman having previously held the roles of President and Chief Executive Officer. Mr. Beddoe has been instrumental in making WestJet one of the most successful airlines in recent aviation history. His keen business acumen has shaped the development of WestJet’s corporate culture, executive team, and strategy.

A true entrepreneur, Mr. Beddoe has a strong background in financial planning and strategic management that was gained through several successful real estate and business enterprises. From 2008 to 2013, he also served as a director of the Alberta Investment Management Corporation (AIMCo), which is one of Canada’s largest and most diversified institutional investment managers with more than $90 billion of assets under management.

Mr. Beddoe has been personally involved in numerous organizations, most notably, the Boys and Girls Club of Canada.

In January 2019, WestJet took possession of its first Boeing 787 Dreamliner, and named the plane after its Founder and Chairman Beddoe. He was born in England, and immigrated to Canada in the 1970s. He resides in Calgary, Alberta.

Carol Lee is CEO and Co-founder of Linacare Cosmetherapy Inc., a company that manufactures and sells therapeutic skincare products. Linacare is headquartered in Vancouver’s historic Chinatown district. With longstanding family ties to the history of Chinatown, she is strongly committed to the revitalization of the area and is the Chair of the Vancouver Chinatown Foundation, Chair of the Vancouver Chinatown Revitalization Committee, and Honorary Patron of the Chinese Canadian Military Museum.

She serves on several other boards and organizations including the Harvard Business School Canadian Advisory Board, the Faculty Advisory Board of Sauder Business School, the Leadership Council of the Perimeter Institute of Theoretical Physics in Waterloo, Governor General David Johnston’s Rideau Hall Foundation, and is Chair of the Rideau Hall Foundation Innovation Committee. She is also a member of federal Finance Minister Morneau’s Advisory Council on Economic Growth.

Katie Klumper (Marketing Management – Communications ’04) is Principal of Deloitte Digital and HEAT (New York creative agency owned by Deloitte). She is charged with innovating the future advertising agency model to best serve clients and brands. Previously, she was President of KBS, a multi-national A-list advertising agency.

Ms. Klumper has guided clients through some of their most innovative marketing initiatives and firsts. Some of her clients have included BMW, Red Robin, Keds, Homegoods, and Samsung. Her experience spans big branding efforts to innovative technology, all designed to shift culture. She is an active member of the equality movement, designing programs for females to excel to c-suite positions, as well as movement groups like Female Quotient, Heymama, Female Founders Collective, and The Chief.

She has been recognized by the AdWeek 50 as one of the top 50 most indispensable marketing, media, and tech executives; named a 40 Under 40 recipient by Direct Marketing News; given the Advertising Women of New York (AWNY) Mother of the Year award; and, most recently, recognized as an AWNY Game Changer.

Mr. Manky formulates security strategy with more than 15 years of cybersecurity experience. His ultimate goal is to make a positive impact towards the global fight on cybercrime. He provides thought leadership to industry, and has presented research and strategy worldwide at premier security conferences. He plays a strategic and visionary role in consulting with leading CSOs/CISOs of Fortune 500 companies worldwide, across multiple industries. As a cybersecurity expert, his work has included meetings with leading political figures and key policy stakeholders, including law enforcement, who help define the future of cybersecurity. Mr. Manky is actively involved in several global threat intelligence initiatives including NATO NICP, INTERPOL Expert Working Group, the Cyber Threat Alliance (CTA) working committee, and FIRST—all in effort to shape the future of actionable threat intelligence and proactive security strategy. He works globally with the security industry and Computer Emergency Response teams (CERT) to provide timely context as well as streamline mitigation advice and threat forecasts. Within Fortinet, Mr. Manky has created a global program to enable deep learning of the threat landscape for technical security architects as well as threat researchers, to combine technical IT skills with valuable threat research knowledge.

Jamie Finley is a Research Assistant with the Natural Health and Food Products Research Group (NRG) in Applied Research at BCIT. He was nominated for his contributions to BCIT and to the broader community, rooted in his commitment to BCIT’s applied model and his experience as a student and staff person who is Deaf. His approach to sharing information, educating those with whom he works, and ensuring a better environment for diversity, makes all of us better at what we do. He has made significant contributions in many roles—as a researcher, a team member, a Faculty and Staff Association (FSA) member, and an advocate.

Mr. Finley was also nominated for his participation in the FSA as a Tech Rep and Equity Caucus member, his involvement in CAUT activities, and his collaboration with the FSA staff and board for advancing its practices. He is also one of NRG’s specialists in fermentation, identification of micro-organisms, and microbial load criteria for agricultural products.

He began his career as a co-operative student with the Michael Smith Laboratories at the University of British Columbia and BCIT’s NRG. He went on to characterize lipids, plasmid DNA, and siRNA for a leading molecular therapeutics company and was involved in developing chemical characterization methods for therapeutic study. His work is embedded in the principle of ongoing learning, always seeking to learn something new every day. His work with NRG influences the direction of industry through building relationships with stakeholders and providing expertise to ensure quality products.

Mr. Finley graduated in 2003 from BCIT’s Biotechnology diploma program and in 2005 with a Bachelor of Science (Honours) from the University of British Columbia.

Ms. Wan has brought national acclaim and media attention to her work and to BCIT. Extending herself far beyond most students in her program, she presented her innovative individual and student group work across Canada, as well as at prominent industry events including the BCTECH Summit, CACCN Dynamics of Critical Care, and the CAN-CWIC Celebration of Women in Computing.

While a student, she worked on two very prominent projects. The first is an app that manages data from a BCIT-created concrete strength tester, allowing it to help save lives in earthquake-prone locations. The second is an Alexa Lab Simulation (for BCIT’s Specialty Nursing Simulation Lab), which received widespread interest for its innovation as well as its ability to help nurses work more effectively and reduce errors.

After completing a summer internship with Vancouver-founded Elastic Path Software in 2018, Ms. Wan was offered a job three months prior to graduation. She is now a Software Developer with Elastic Path.

BCIT is pleased to celebrate these extraordinary individuals at the BCIT Distinguished Awards gala on October 22, 2019 at Vancouver Convention Centre West. Thank you to all attendees and sponsors for your generous support.