Skip to content
BCIT in the Media, Community, People 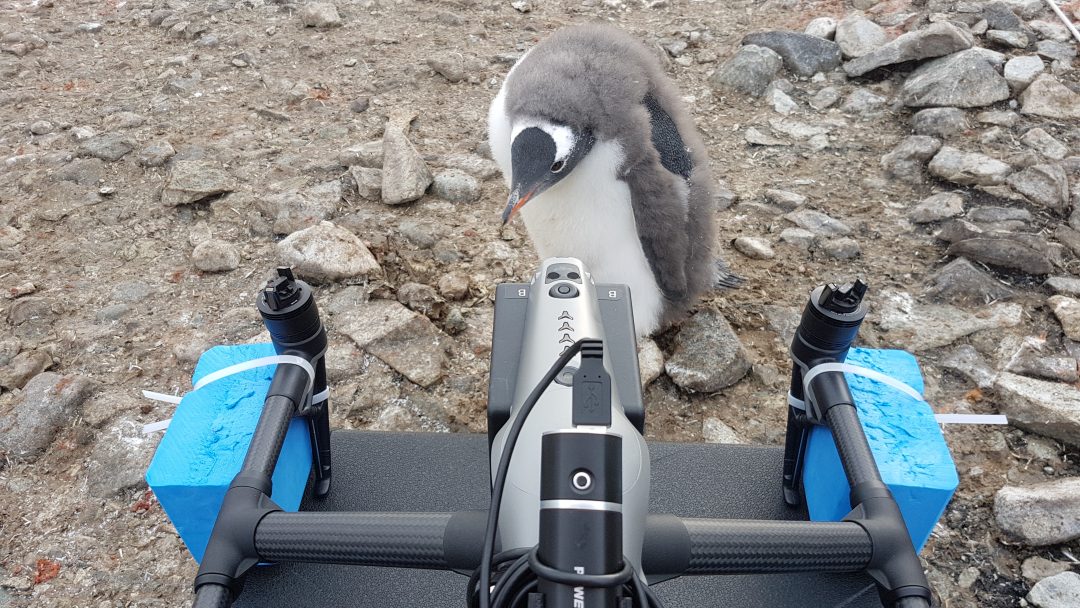 (This story first appeared in BCIT LINK Magazine by Sean Murphy on October 22, 2018.)

Eric Saczuk is a Geomatics Engineering instructor at BCIT, but he also operates as a UAS pilot and researcher. He’s got an eye for photography and operates professionally as Space Hog Graphics with clients ranging from Smirnoff Canada to Vanity Fair. His most recent project, mapping the Antarctic with drones, was funded through grants. This had all the right buzz words to crank my curiosity to 11, so I sat down with him in his office on campus to talk about that experience.

Tell me about the Antarctic…
It was awesome. It’s a place of interesting dimensions – I found it to be quite vertical in nature. There’s not as much flat ground as you’d expect. The flat angles of the horizons, the icebergs, the mountains; they’re all quite varied. The way the light shines on the different elements of the glaciers. It was a really dynamic place. And I found it quite – surprisingly, to me, anyway – full of wildlife. Really abundant.

What was the feeling there for you?
It was way more on the hectic side. I was extremely busy. There weren’t many moments where I could chill and relax. In the morning, my mind was always on getting ready for the excursion of the day and getting my gear ready. Then travelling to where we could potentially launch the drones – which could be challenging. We’d land on one beach and there’d be 12,000 penguins there.

[Also] just prepping the gear, and making sure you don’t forget anything. You always forget something. Then getting to the place where we could potentially launch. The first place we actually took the Zodiac and landed on the beach was where the 12,000 penguins were. Then you’re trying to not disturb the wildlife and find a safe place to launch. Once you know the flying is hectic – you’re making sure the drone doesn’t fly away or end up in the water. Then packing up and getting back on the ship. Then it’s processing time – it’s getting the data out of the drone to see what you actually got. It’s very stressful because once you’re back on the ship, the ship is moving away. You can’t go back. You have no chance of going back to where you just flew. If anything went wrong, you have to adjust and apply that to the next spot. The only time we only really got to socialize was during meal times. At lunch and dinner, that’s the only time I got to talk to people.

What equipment did you take with you?
I took two BCIT UAS [Unmanned Aerial Systems]. I had a DJI Maveck Pro – a little one just for filming. I also had the larger DJI Inspire 2. It’s more of a heavier-lift drone. You can attach extra sensors on it. We had an X7s Camera on the front of it,  and on the back we had three different types of sensors. There was another sensor I was going to take but I didn’t have time to implement it.

Was there a sense of urgency?
For me, and for a lot of scientists, the Antarctic is the cutting edge of climate change research. The polar regions are experiencing climate change in a more profound way. A more exasperated way. It’s important to collect data in these areas. One question I really wanted to answer was, “What is the feasibility of using drones and these types of sensors to collect data in the Antarctic?” Is it even feasible? Is it worthwhile? Drones don’t tend to cover a lot of area. But they’re very mobile, they’re quick to deploy, and they’re very, very cheap to operate, relatively speaking, in comparison to helicopters and other aircrafts. You can get them to places much more efficiently. You can collect data that otherwise wouldn’t be easily collected.

Is there a link between this project and your love of photography?
I’ve had a number of passions. Aircraft was my first love. That was where I started to dig deep. Ever since I was eight years old. My dad took me to an airshow, and I knew I wanted to do that. I went to the Air Force for a couple of years when I was in grade 10 through 12. Air Force Reserves. Then I went to university and I kind of set that aside because I was focusing on more academic things. I came back to airplanes through geography, aerial photography, satellite images and remote sensing. Drones fit so nicely into that element because they allow me to take pictures and fly. My dad introduced me to photography when I was young, and I really picked it up again about eight years ago when I started to do photography professionally. I do that on the side. It’s a great marriage of my two passions.

What grants did you need for this project to work?
The Learning and Teacher Framework (LTF) grant was super critical in terms of allowing me to get a berth on the ship. I leveraged three different funds; I applied for the Trek Fund, the International Monetary Fund, and the LTF grant. That’s what I needed combined and it just barely covered the costs of getting to Antarctica and back with the gear. The LTC was instrumental in acquiring a lot of the gear I brought with me. That’s a fourth element. So without the support of Brian Hosier and Cathy Griffin, this project would not have happened. I’m really grateful they believed in me.

Is this a work in progress, is it something that can be completed?
Research and data collection in the Antarctic – just like anywhere – will never be complete. I hope that this increases the level of data collection and focus on the use of drones in Antarctica. For me, the project report has been written; so I’ve satisfied all the criteria of the funds and that’s all been done. But in terms of the data, there’s so much more that can be done. I’ve haven’t even really scratched the surface of what I can do with the data that I collected. Because as soon as I came back, there’s a million other things to collect data on. I’ve just been super busy flying drones and collecting all this data. In a sense, there’s a lot more that can be done with that data set.

Is there anything I didn’t ask you about you’d like to mention?
Directly related to this, and largely as a result of this project, the idea came up to coordinate and centralize all UAV/UAS activity across all BCIT campuses. What I’m working on right now is a business case to establish the Centre of Excellence at BCIT called the UAS Hub. It’ll sit at an institute level and it’ll coordinate all UAS activity across all campuses and improve the safety of operating BCIT drones; whether on or off campus. It’ll give access to our huge repository of equipment, software and expertise to students, faculty, researchers. They’ll be able to come in with interest. We’ve got manuals, the gear, people you can talk to. People that can take you out and show you how to fly a drone. Transport Canada has given us approval to fly our drones anywhere in Canada – pretty much anytime, anywhere. We want to proceed with that very carefully and very safely, so we maintain our reputation. It’s going to elevate BCIT as a Centre of Excellence for UAV training and research.

I don’t necessarily want to push drones on everybody, but I do want to make it clear we have them here and I want them to be used. The last thing I want is for us to have invested all this money and energy for them to sit on the shelf and do nothing. But I can say, our department drones here at BCIT don’t stay on the shelf very long. They’re in the air almost every week. I just flew last week with the FNAM students on Boundary Bay collecting data and I presented some of it this morning. I love the fact that it’s active, and I want to make it even more active. If students have the idea to use a drone, I want them to know how to access one.

Watch the video of how Eric Saczuk is making a difference in the community and inside the classroom.