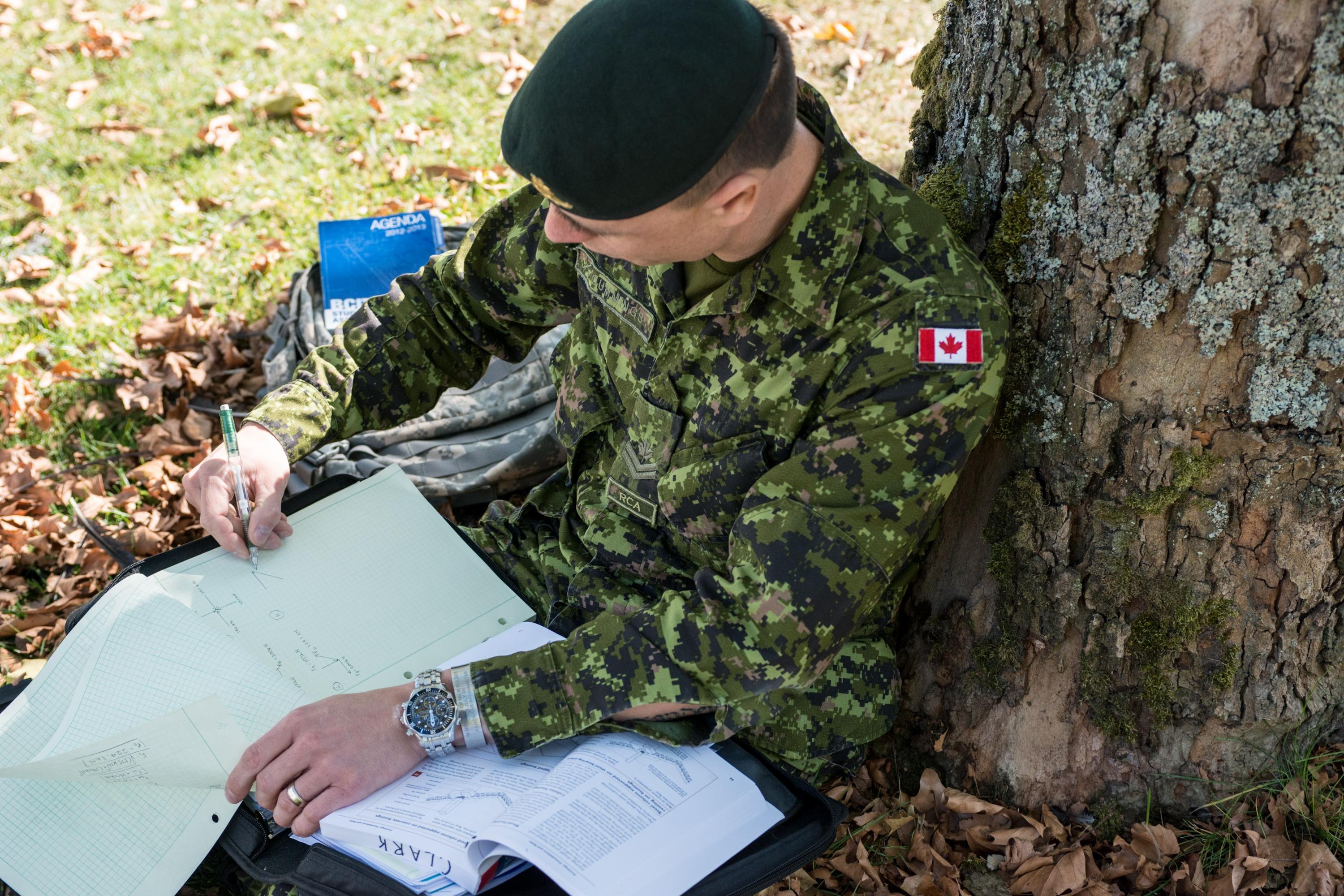 Joe Chu’s military career spanned 14 years, including tours in Afghanistan and the Philippines. As his service was winding down, Chu began exploring his career options and realized that his time in the military wouldn’t be enough to land him the job he wanted. He needed credentials.

“I felt that the skills I had were transferable to a civilian job, and when I looked at home at what I needed, I realized that what I had learned was the same as a business management diploma,” says Chu.

Chu was referred to British Columbia Institute of Technology’s (BCIT) Legion Military Skills Conversion Program, where his military experience and education were assessed and he was fast-tracked into the Advanced Business Management diploma program.

As a member of the military, Chu went through standard combat training, but he also received a great deal of area-specific training in administration, where he worked in a group akin to a civilian human resources department.

The BCIT Military Skills program helped him translate his considerable work experience into a resume-friendly credential. More than that, it helped him prepare for a rewarding civilian career.

Canadians are highly educated, with the majority holding some form of post-secondary certificate or degree. The demand for a post-secondary education has been driven by a highly competitive job market. Jobs that once required a high-school diploma now ask for a minimum of a bachelor’s degree.

The increasing expectation that applicants hold post-secondary credentials can lock otherwise skilled workers with valuable experience out of rewarding careers. BCIT has responded to this challenge by creating a framework for assessing the education and work experience of individuals who are employed in a select number of organizations with rigid training programs. Coming out of an approved organization–like the Canadian Armed Forces–students may be fast-tracked into one of BCIT’s many accredited post-secondary programs.

BCIT faculty member Dr. Kevin Wainwright developed the Legion Military Skills Conversion Program because he believed that the skills Canadians gain through workplace training and experience have been going unacknowledged due to a lack of credentials.

“Our society is full of people who don’t realize they have picked up a lot of intangible skills along the way,” says Wainwright. “It’s a huge social issue. There are more 50 year olds in B.C. than 30-year-old people, and we’re facing a skills shortage; we have to find a way to formally recognize the skills people already have developed, allowing them to take on leadership roles.”

The Legion Military Skills Conversion Program is run out of the BCIT Burnaby-based SITE Centre for Excellence, where Wainwright is director. The SITE Centre works with potential students to assess their skills, cross-referencing them with BCIT curricula. Students include military veterans, current reservists, first responders, tradespeople, and mature students from all walks of life.

“What we do is look at the person and work backwards,” says Wainwright. “We look at their prior education and training, then assess the equivalent amount of education a person with those skills would have completed. Then we identify the gaps they need to fill.”

In 2006, Wainwright was approached by veterans who wanted to help the many young soldiers coming back from Afghanistan transition into civilian life. As he started to work with these soldiers, Wainwright realized he could build a framework that would allow former soldiers to gain recognition for their military training and for the experience they gained while on the ground.

“You talk to a soldier and ask what he did in the army, and he says that he was a cook. But this soldier co-ordinated a team of 1,000 people, all the shipping of produce from the United States and Canada into Afghanistan, and served food bang-on time, every day,” says Wainwright. “That’s way more than a cook.”

Other Canadian schools are taking notice of BCIT’s success, and Wainwright even presented the program to the federal government in 2012. The government subsequently provided funding for the model to be taken nationally.

Now there is a consortium of like-minded schools across Canada that has created a portal where other schools can access information on how to create their own advanced placement program.

Wainwright’s next move is to export the program internationally, and he has already helped some U.S. schools implement the program. He would also like to bridge what’s already been accomplished at the SITE Centre into a foreign credential recognition hub for new Canadians whose education and skills are currently not being properly assessed. A Conference Board of Canada survey estimates that over 340,000 Canadians hold unrecognized foreign credentials.

“The beauty of this program is that we’ve built the right framework that allows us to recognize the alternative education of any person with work experience and training,” says Wainwright. “It’s what is needed in our education system so people can continue to grow in their careers.”

For Chu, the Legion Military Skills Conversion Program has been instrumental in his transition to civilian life. He finished his Advanced Business Management diploma in December 2016 and intends to continue on to complete his Bachelor of Business Administration and ultimately pursue a career in sports management.

“Things are done differently in the military, and BCIT’s programs do a very good job of showing us what it’s going to be like in a real working environment,” says Chu.

BCIT has also partnered with the Vancouver Film School (VFS) to transition students into business-oriented courses and programs.

The B.C. film industry is experiencing a boom, with a wave of projects coming to the province due to the favourable Canadian dollar and Vancouver’s reputation for having well-trained film crews. Streaming services such as Netflix and Amazon are accelerating the boom, with their production wings filming 12 shows in Vancouver’s streets and studios this past year, including Super Girl, Haters Back Off!, and The Flash.

BCIT worked with VFS to assess the film school’s programs to determine what knowledge is transferable to BCIT’s curricula and what components students were missing. In its first year, the partnership has already attracted 45 students from VFS.

Ted Gervan, the director of educational administration at VFS, is a fan of the BCIT program. It allows the creative minds that come out of his school to acquire the skills to start their own businesses, and in doing so, expand the industry in new ways.

“From our point of view, the B.C. film market is hugely saturated, and it’s at a tipping point where a program like this can help turn Vancouver from a service-based industry to a creative industry, where the ideas and films are coming from Vancouver,” says Gervan.

Through the BCIT program, VFS grads can transfer to BCIT where they are accelerated into the business diploma program. If they choose, they can then continue on to attain a Bachelor of Business Administration degree from BCIT–all within three years.

“The size of these productions means they need people who can look at the whole picture from a business perspective and understand why a project will fail or succeed, and have the know-how to implement a strategy that will allow it to be successful,” says Gervan. “It’s that organizational capacity you get at BCIT mixed with the production skills you get at VFS that helps people move up in the business.”

VFS is the latest institution to partner with BCIT to develop a pathway to post-secondary credentials, but the program got its start with the Canadian Armed Forces.

A version of this story first appeared in The Vancouver Sun, December 31, 2016  with credit to Abby Wiseman.