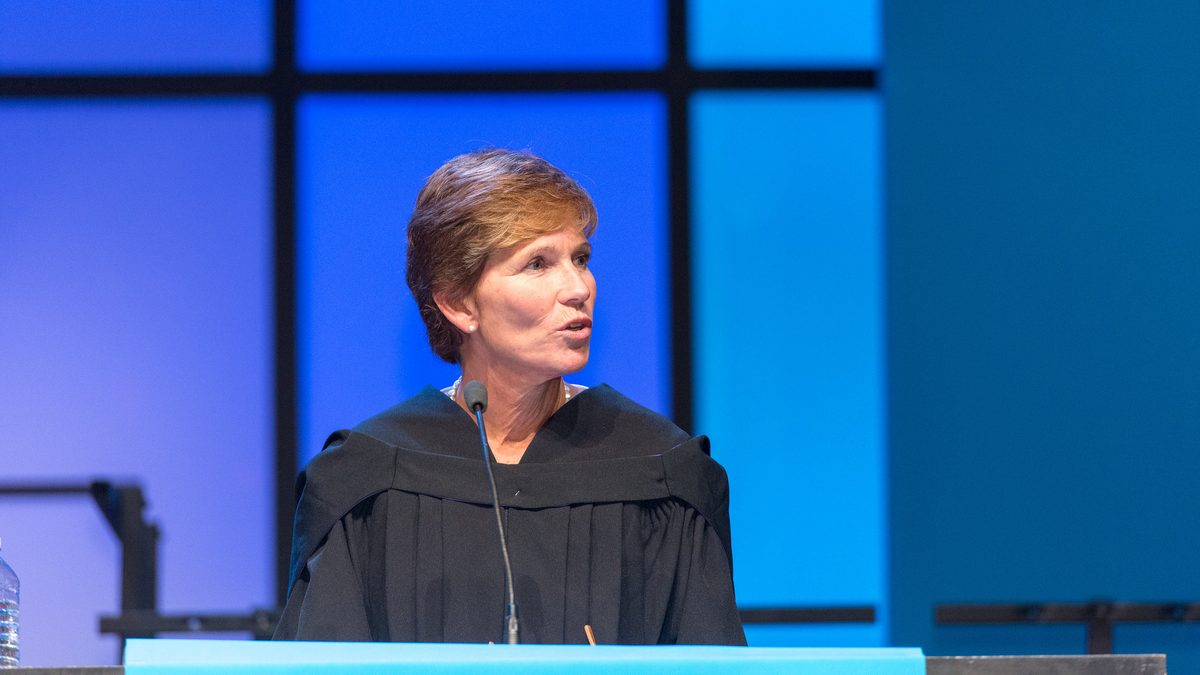 The British Columbia Institute of Technology spring 2018 Honourary Doctorates in Technology recipients are: Sue Paish, CEO of Canada’s Digital Technology Supercluster, and David Tuccaro of Tuccaro Inc. Prior to receiving their degrees, Sue and David were honoured at the BCIT Distinguished Awards dinner late last year.

Sue has long been an advocate of BCIT. She joined the Board of the BCIT Foundation in the 1980s as a young lawyer. When she receives her degree, it will be her second time to have graced the BCIT convocation stage—Sue delivered the keynote address to graduates in June of 2016. At that ceremony, she told those waiting to cross the stage to savour the moment.

“You are in a very special group,” she said, “and you will be in that group for the rest of your life, because you are a BCIT graduate.”

In February 2017, Sue moderated a conversation about disruption at the Greater Vancouver Board of Trade that featured BCIT President, Kathy Kinloch, and BCIT almuna Nadia Dobrianskaia.

Sue is highly regarded across multiple industries. One of her fans is former BC Finance Minister and current Chancellor of the University of Toronto, Carole Taylor.

“You can’t be in Sue’s presence for more than a minute and not sort of be infected by her enthusiasm and her desire to make the world better,” says Carole.

Along with David Tuccaro, Sue will receive her degree at the BCIT convocation ceremonies in June 2018.

Sue was recently appointed CEO of Canada’s Digital Technology Supercluster where she will be leading the efforts to establish BC and Canada as a global leader in digital technology.

Prior to her new position, she was CEO of Lifelabs. At LifeLabs, she worked to build a healthier Canada along with approximately 5,400 professionally-trained employees who deliver over 100 million laboratory tests and results, serving 19 million patient visits annually.

Prior to joining LifeLabs, Sue led Pharmasave Drugs (National) Ltd., the largest independently owned and operated banner of community pharmacies in Canada. This followed a successful career practicing law and managing an international law practice; Sue was the managing partner of Fasken Martineau DuMoulin LLP in BC (now Fasken Martineau), where she led the growth of the firm from one office to an international presence with nine offices on three continents.

Sue received a Queen’s Counsel designation in 2001 and was awarded the University of British Columbia’s Faculty of Law Distinguished Alumni Award in 2003. She has also been recognized as one of BC’s “Most Influential Women in Business” and was inducted into “Canada’s Most Powerful Women: Top 100 Hall of Fame.”

Sue is a recognized community and business leader. She currently sits on a number of corporate and community boards including the CORIX group of companies, the Executive Committee of the BC Business Council, and the Faculty Advisory Board for the Sauder School of Business. She formerly chaired the boards for the Michael Smith Foundation for Health Research, the Vancouver Board of Trade, the MLA Compensation Task Force, and served on the BC Pharmaceutical Task Force.

Sue’s family and her love of the outdoors are her prime motivators. With husband Brad and three daughters sometimes in tow, Sue can often be found camping, fishing, or hiking the North Shore Mountain trails and many remote areas of BC.