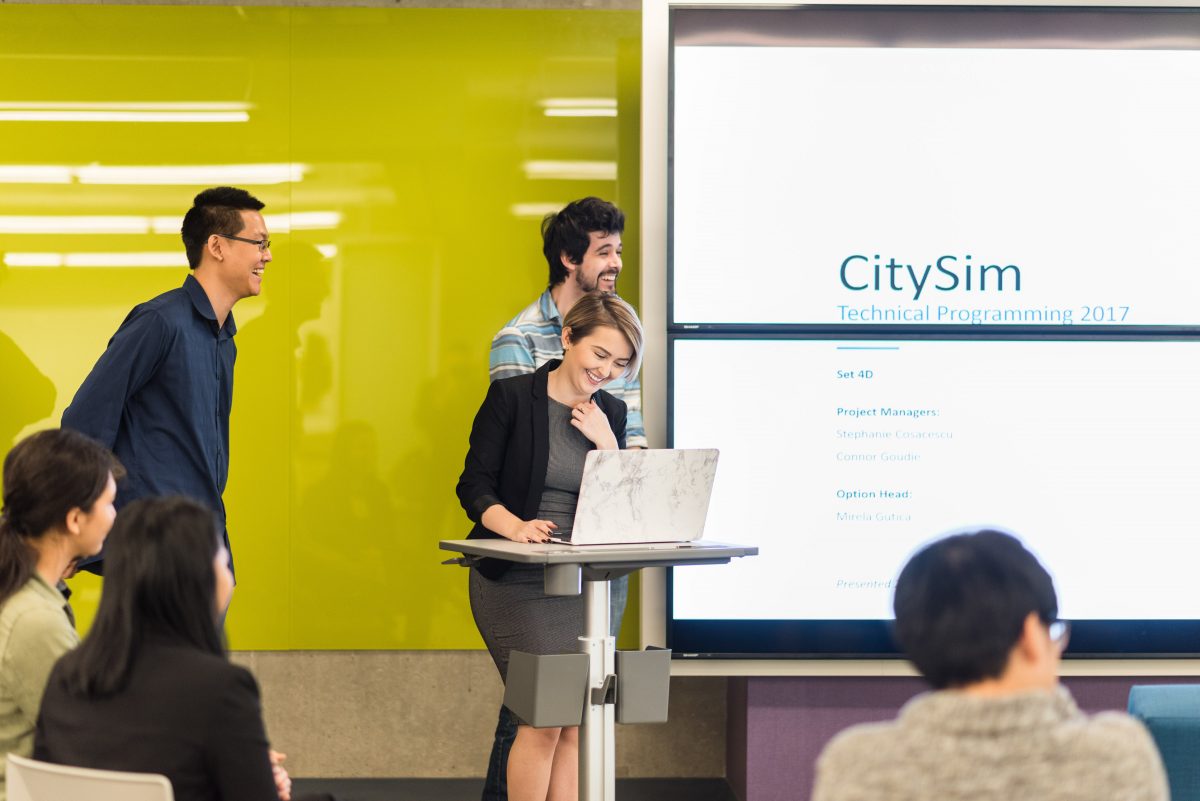 The Technical Programming option culminates in a whole-class project to try to mimic what happens in industry. This year the class of 20 created a challenging city simulation project–City Sim–using several technologies including Microsoft’s Hololens, a mixed reality holographic computer.

Success is not a straight line

Applying Agile principles, the large group worked in subgroups towards the project goal, mirroring what happens in real-world software development. And just like in the computing industry, students encountered many challenges along the way. With perseverance, not to mention many late nights, they brought their creation to the demo point.

The project architecture encompasses a server where the city simulation code runs, a database, a networking component, and two clients: a desktop and a HoloLens client.

“This kind of project is very demanding because of its complexity, the incorporation of new technologies, the challenges resulting from integration, and the time constrains,” explains Option Head Dr. Mirela Gutica. “Collaboration and communication between teams is extremely important.”

According to student Stephanie Coascescu, “the capstone was a particularly unique opportunity to design, create, integrate, and deploy a modular, multi-team project. I consider myself and my class very lucky to have had exposure to such a massive collaborative experience at such an early stage in our careers.”

“Getting to explore the possibilities of, and develop for HoloLens while it’s such a new, innovative platform was really fascinating.”

Presenting the project to industry

Special guests from Microsoft and the Vancouver Economic Commission attended the final student presentation as well as faculty and managers. The team presented the whole development process as well as offering demos.

Edoardo De Martin, Director of Microsoft Vancouver, actually visited the class mid-term when the project was half done, and also invited the team to present to him directly at Microsoft.

“My students are grateful for such an opportunity,” reports Mirela. “The feedback and professional advice they received is priceless!”

In fact, one of the students got more than professional advice: they were invited to interview at Microsoft.

In the end, Mirela hopes that students enter the booming BC tech workforce with the best possible experience of working within large teams, and an eye on the most important element, no matter what kind of project they’re on: the user.

According to Stephanie, the point is getting through: “TechPro’s unique emphasis upon user-centered design reminded us daily of the real-world importance of intentionally building software to improve businesses, processes, and experiences.”

BCIT Computing is also offering VRAR courses on a part time basis for those already working in the software industry. Find out more.