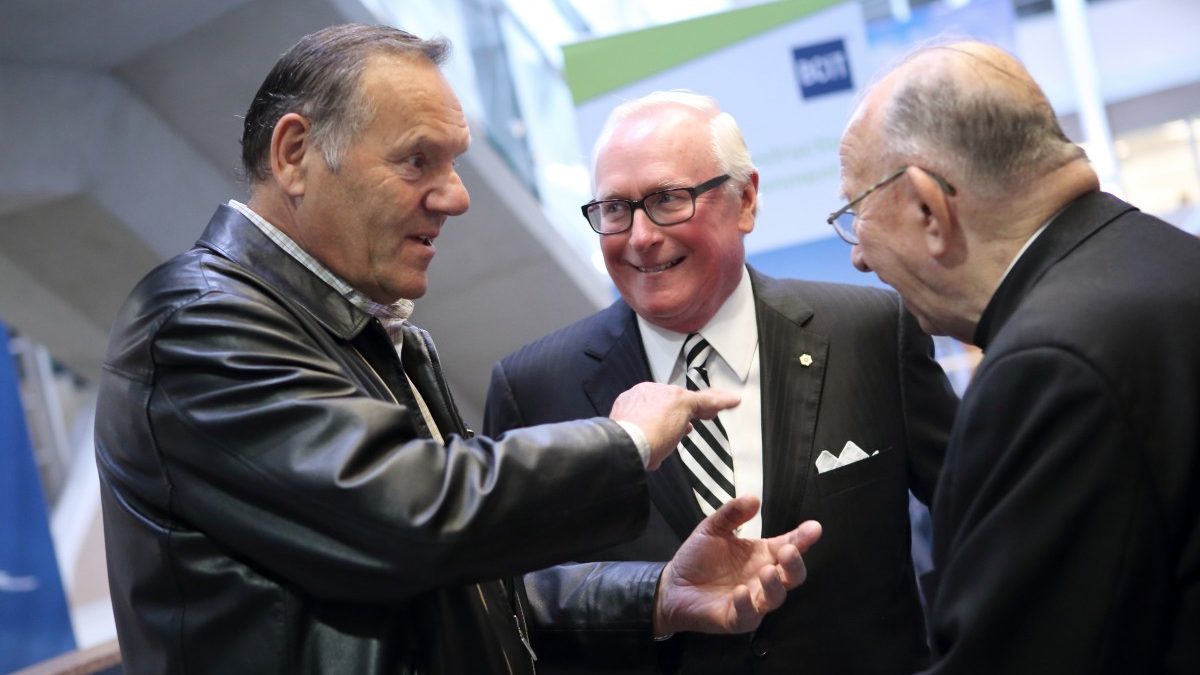 Photo: Robert Bosa (L), catches up with Podmore and a mutual friend.

On Friday, September 23, members of the BCIT community gathered with titans of BC’s construction industry to honour a shared hero: David Podmore.

A plaque and photo were unveiled in the Gateway building of the Burnaby Campus to mark the new Dr. David Podmore Gallery.

Podmore, the CEO of Concert Properties, has been a long-time friend to BCIT. Two decades ago, he was instrumental in the creation of the Trades Discovery Programs, and continues to support the programs today. In the intervening years, he has served on both the BCIT Foundation Board of Directors and the BCIT Board of Governors. He has been a philanthropist and an advocate for the Institute with both industry and government. His influence extends from the halls of power in Ottawa to the lives of individual students.

Laura Quilty is one graduate who says she has Podmore to thank for turning her life around.

Quilty’s former teacher was with her. Tamara Pongracz, the Program Head for Trades Discovery, spoke about Podmore’s leadership. She said that before he helped found the program, the trades weren’t thought of as viable career options.

“Leaders challenge process and search for ways to change status quo,” she said. “David changed status quo. Leaders also inspire a shared vision and enlist others in their dreams. His infectious enthusiasm quickly gained the support of other leaders from the construction industry. For example, Mr. Bosa of Bosa Construction signed on right away.”

Robert Bosa was in the crowd to see his old friend be honoured.

“I’ve known Dave for 25 years,” said Bosa. “Whenever he calls on me, I can’t say no because he does so much for everybody else. If anyone deserves an award, it’s him. He’s a very nice guy.”

“He’s just an amazing person for BCIT to have,” he said. “You know, when he called on us 20, 25 years ago to support the Trades Discovery Program, we went, ‘Why didn’t I think of that?!’ We of course all jumped behind him and have been supporting this ever since.”

Just as Podmore was preparing to take to the podium, a group of current trades students—and bursary recipients—joined the celebration.

“It means a lot to me,” says Podmore. “This is really an honour. I’m not used to this. I really have thoroughly enjoyed the time I have been able to work to support BCIT, particularly students. But please know, this isn’t about me. It’s about a lot of the people in this room, especially the individuals who have supported us for almost 22 years.”

Podmore also humbly mentioned that Concert’s annual golf tournament raised enough money this year to ensure BCIT will soon get a cheque for $125,000 for the Trades Discovery Program.

When asked why he has given back in such a quiet and consistent way, Podmore said “it stems from a belief my father had, my business partner, Jack Poole, had, that the community has been very good to us. I feel we have a responsibility to contribute back to the community.”

The plaque in Dr. Podmore’s honour reads as follows:

Since 1997, Dr. Podmore has been actively involved in expanding opportunities for our students. His vision for trades education led to the establishment of the Trades Discovery Program, which has increased access to trades training in British Columbia.

Dr. Podmore has demonstrated significant commitment to BCIT through his leadership as a member of the BCIT Board of Governors from 1998-1999 and as a volunteer on the Foundation Board of Directors, where he served as a Director from 2005 to 2009 and as Chair from 2009 to 2011.

In 2005, Dr. Podmore was awarded an Honorary Doctorate of Technology from BCIT, recognizing his outstanding achievements and service.

In addition, his philanthropic leadership has positively impacted students’ lives through corporate and personal donations. Dr. Podmore’s generosity and commitment to BCIT have provided the opportunity for hundreds of students to explore the trades and find their true passion. Thanks to his support, BCIT students continue to achieve their educational goals and thrive in successful careers.

Tags: Donors, Facilities, School of Construction and the Environment, School of Energy