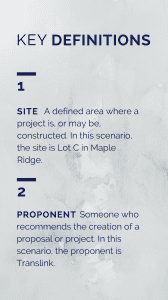 Lot C, the site, is west of the Golden Ears bridge on the north side of the Fraser. It is within the City of Maple Ridge but borders the City of Pitt Meadows as well as the Katzie First Nation community. It includes stream courses and wetlands that interconnect with the Katzie Slough, an important waterway that once connected Katzie villages from the Fraser River to the Pitt River.

The Proponent, in partnership with local managing agencies and government, wants to come up with a site design and management plan for Lot C. The Proponent would like to develop 20% of the site as a business park, which would include a building and parking area footprint. The rest of the site would be allocated to habitat restoration/enhancement and storm water management, as per Maple Ridge regulations and within the context of neighbouring water networks and the site’s ecosystem.

Students spent valuable time consulting with Rod Stott, City of Maple Ridge Environmental Planner, and meeting with George and Richard Moody, Katzie First Nation Elder and Youth. Students discussed site development based on what would be feasible and appropriate within the larger area (given historical and future potential ecological and cultural values) and what risks and economic factors needed to be considered. Some of these considerations included noise impacts from the bridge, flooding and storm water management and invasive plant species. Each team received resources and support for equipment and media such as Digital GIS Data, Reports & Maps, and Computer Lab and Technical Support.  They were also provided compensation for travel and catered meals were brought to the field.

The final site plan proposal is presented to a panel of judges in the form of a 15-minute oral presentation. Presentations were held at the Awards Night Gala at BCIT Forest Society’s Woodlot 0007 where catered appetizers and an fabulous dinner was served.