The director of the Franklin Institute in Philadelphia, Armand Spitz, produced a projector in 1946 that was affordable for smaller facilities. Because the punching of star holes into a spherical cage was rather expensive at that time, he tried to approximate the sphere by an icosahedron. The twenty-sided cube consists of plain triangles, and it is easier to drill pins into them. In practice, the construction turned out improperly, so, Spitz chose a dodecahedron as suggested by Albert Einstein. This “Model “A” became quite successful. Spitz let the company Thomas Industries produce it, and sold 50 pieces to schools and universities. Two extended models were released under the label “A-1” and “A-2”, respectively. Both look same as the earlier projectors, but the stars of the 1st magnitude are very much sharper. Furthermore, they have an improved gear for the geographical latitude. Their production was ceased in 1960. 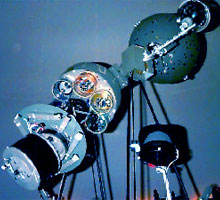 The next step in the evolution of the Spitz projectors was embraced with the model “A3P” (image). It was produced in the 1960ies and 1970ies and became the most common commercial projector ever made. Mainly sold to colleges and schools, it was intended for 7 to 12 meter domes. The star device became spherical after the dodecahedron. It projects between 1500 and 6000 stars depending on the technical implementation. It uses both pinholes and lenses for the brightest stars. The planet gears are placed diametrically opposed to the star ball to balance its mass. On its base, the apparatus allows for the plug in of other devices for additional effects to be able to operate them from the control panel.

The BCIT planetarium offers a variety of astronomical adventures for diverse groups. In the past we have hosted visitors from local schools, where the one-hour lectures are keyed to the BC Curriculum objectives.
Girl Guides, Scouts, Cubs, and related groups receive a special presentation in order to help them get “the badge”, sought after by all. There is the possibility that lectures could be supplemented by a brief trip outdoors to look through an actual telescope (weather and time of day dependent of course).
Other groups include small boat enthusiast, navigators or simply dreamers wishing to spend some time under the stars.

NOTE: Events are designed specifically for each group. Price to be confirmed before event.