The first device that we might call a planetarium, in the sense that it enclosed a space for viewing an artificial sky, appears to have been a sort of tent with holes in it that was made by Arab craftsmen. 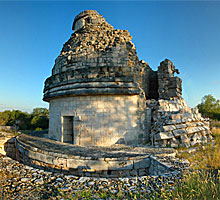 The device showed up in Europe as Crusader spoils. In 1229 the emperor Friedrick II of Hohenstaufen brought the tent with him from the Near East. It was a tent that could be turned. Although the details are sketchy it seems that the viewer sat within, while a sort of turntable moved the tent. The covering was perforated with tiny holes used to represent stars. The sky, therefore, and the motions of the constellations could be viewed in daylight. Over the next 600 years the same idea led to the making of various domes and globes for viewing stars while mechanical orreries, or models of the solar system, that could be driven like the hands on a clock became more accurate and ornate.

By the year 1900 these devices were well known. Then, in 1903, a German scholar, Oskar von Miller, began planning a Museum that would celebrate the accomplishments in science and technology. The German Museum in Munich was to have a section dedicated to astronomy. This meant a “planetarium.” Von Miller decided to try to show both a mechanical orrery, showing planet movements, plus a natural night time scene with stars in the same instrument. He sent a request for ideas to an optical company called Carl Zeiss located in Jena. Engineers at the company decided to try light bulbs rather than holes for the stars. This would ensure a bright controllable light level even on cloudy days and during evening hours. There was a problem. 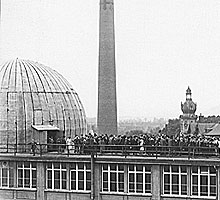 A large ball in which up to 100 viewers would stand and look at light bulbs would require a large noisy motor to turn the device. Also, the planets have variable positions. This would mean a series of bulbs in a row that could be turned off an on independent of the other lights. It began to look complicated. Then a simple and elegant solution suggested itself. Why not make a fixed dome and use it as a projection screen on which to throw multiple images of sky objects? It took years to iron out the details and all work halted during the 1914-1918 War. But the first planetarium, in the modern sense of the word, opened in 1924 in Munich. In 1930 the first Zeiss planetarium was opened in North America in Chicago.

During the 1960s major facilities arrived in Canada including Toronto, Vancouver, Calgary, Edmonton and Montreal. Yet the high cost of the Zeiss made these installations a rarity. The small planetarium market was successfully opened up by an American newspaperman: Armand Spitz (1904-1971). It was one of these smaller, simpler devices that came to be installed in the basement of building SW3 here at the Burnaby campus and it opened in 1964. The BCIT Spitz planetarium was British Columbia’s first planetarium and is currently using the Spitz AP3 Planetarium Projector.

The BCIT planetarium offers a variety of astronomical adventures for diverse groups. In the past we have hosted visitors from local schools, where the one-hour lectures are keyed to the BC Curriculum objectives.
Girl Guides, Scouts, Cubs, and related groups receive a special presentation in order to help them get “the badge”, sought after by all. There is the possibility that lectures could be supplemented by a brief trip outdoors to look through an actual telescope (weather and time of day dependent of course).
Other groups include small boat enthusiast, navigators or simply dreamers wishing to spend some time under the stars.

NOTE: Events are designed specifically for each group. Price to be confirmed before event.