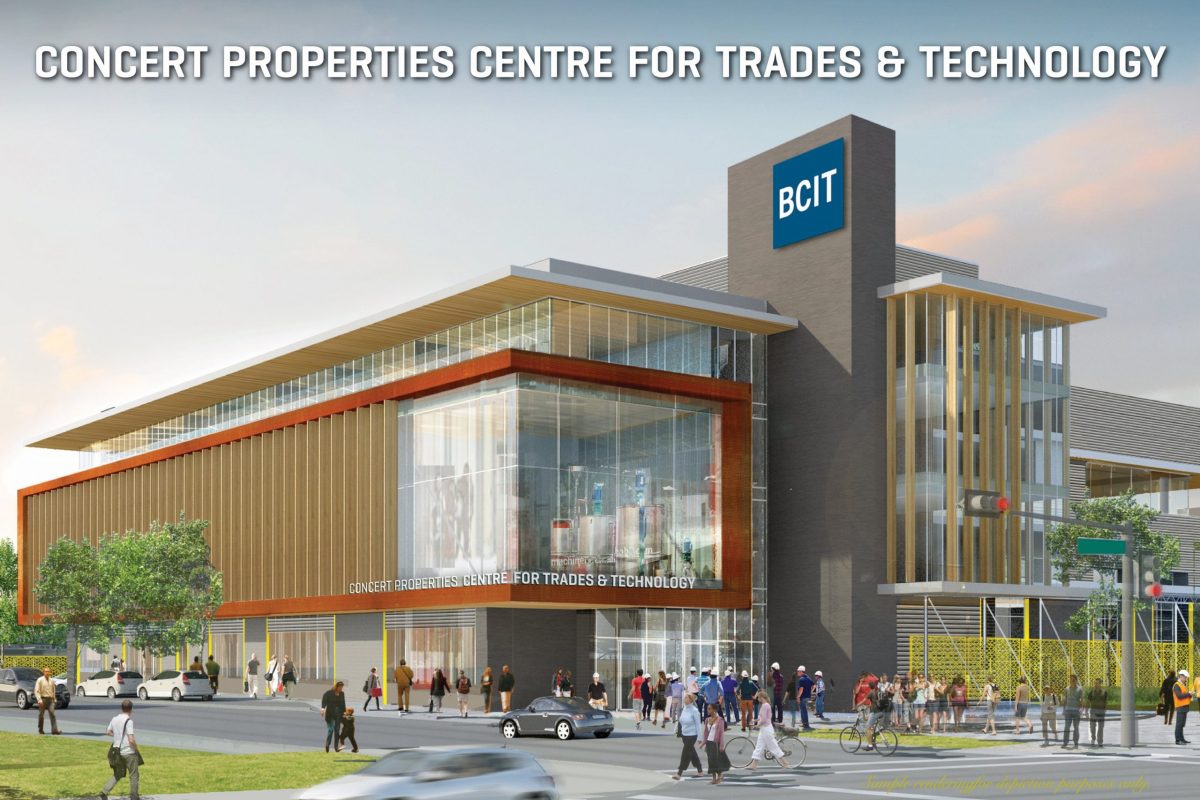 BCIT recently announced that the new Trades and Technology Centre will bear the name of Vancouver-based real-estate developer Concert Properties in recognition of the company’s long-standing commitment to supporting students and trades training at the Institute.

Once completed, the Concert Properties Centre for Trades & Technology will provide a space for innovation in skilled trades and engineering, applied learning, research and industry collaboration, and build capacity for 700 additional students which will alleviate trades training waitlists and help to build up a healthy talent pool in BC. The Centre will also anchor the new and renewed nine-building Trades and Technology Complex (TTC), under development at BCIT, featuring a covered works yard, simulation-based learning areas, maker spaces, and power, welding and construction areas.

Concert donated $7.5 million as the Lead Donor for the Centre, which represents a key phase of BCIT’s INSPIRE Campaign that brought together government, industry partners, donors and alumni to usher in a new era of applied education at BCIT. It will also serve to bolster BCIT’s reputation as a future-forward learning community positioned at the intersection of innovation, technology, and industry partnership.

“We’re extremely humbled and honoured to see our long-standing commitment to trades training programs and BCIT recognized in this way,” says Dr. David Podmore, OBC, Concert Co-Founder & CEO and Honorary Doctorate of Technology at BCIT. “This Centre and these programs are key to equipping diverse, hardworking Canadians with the skills to secure well-paying jobs in construction, and we remain committed to working with our industry partners to find practical solutions to challenges that affect us all.”

In the mid 1990s, Podmore first brought together industry leaders to address a shortage of skilled trades labour and subsequently founded Concert’s Corporate Annual Charity Golf Tournament to raise funds for trades-training programs. In 2002, David and industry partners launched and provided funding for BCIT’s Trades Discovery program, which has helped people across BC explore and pursue careers in different construction trades for the past two decades.

Since the inaugural charity golf tournament was held in 1995 the annual event, and other initiatives led by Concert, have contributed over $2.4 million to the Trades Discovery program. With the $7.5 million donation towards the new Centre, Concert’s total financial commitment to BCIT over the past quarter-century has reached nearly $10 million.

David has also led the INSPIRE Campaign as chair since 2018, helping to bring over $100 million in funding for the TTC and BCIT, which is the leading and largest provider of trades education in the province of British Columbia.

“The Concert Properties Centre for Trades & Technology will help meet the demand for an estimated 85,000 new trades jobs expected over the next 10 years in BC,” says Paul McCullough, Interim President, BCIT. “It will set a new standard for applied education, research and collaboration – where together we will advance education, industry and society.”

Learn more about the new Concert Properties Centre for Trades and Technology and BCIT’s INSPIRE Campaign.

Tags: Advancement, Facilities, School of Construction and the Environment