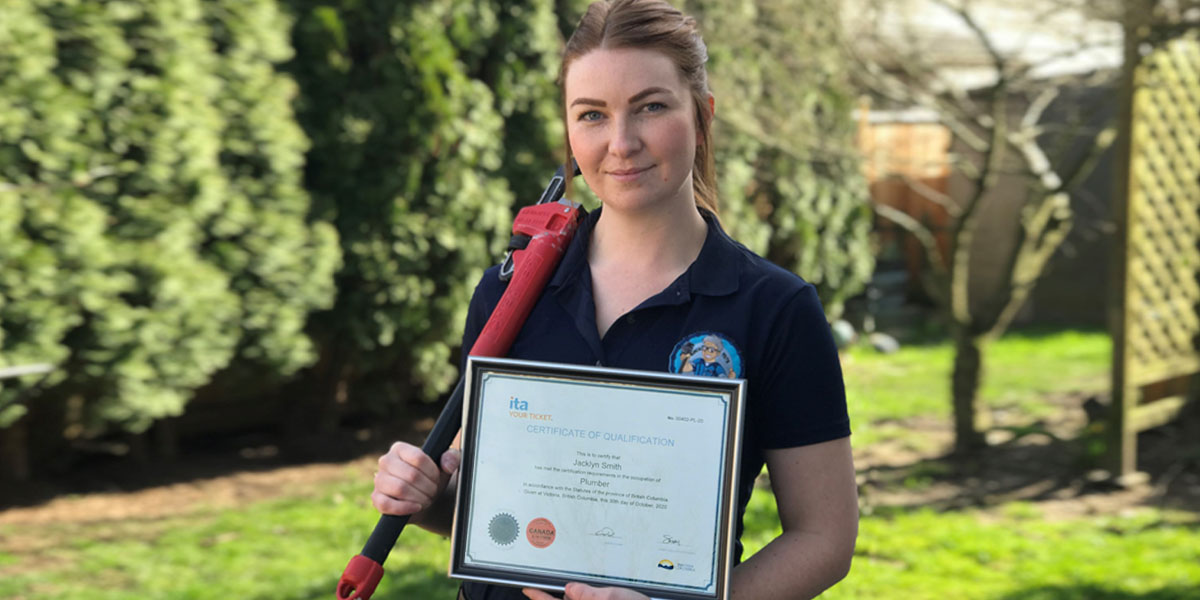 BCIT alumna Jackie Smith was looking for a career change, but was coming up short on ideas.

“I was working as a baker, and although I enjoyed it, I knew there was no way I could make a living on minimum wage,” Jackie says.

She liked to see projects through to completion and doing something with a creative component, but didn’t know where to start.

Then a work colleague recommended the BCIT Trades Discovery for Women program, which allows students to gain hands-on experience in 15 different trades disciplines. Jackie knew that was the program for her.

Jackie Smith takes on the trades

“The first week, I was terrified,” Jackie says with a laugh, recalling her time at BCIT. “I really didn’t want to embarrass myself.”

In class, she realized she was surrounded by other women who were in the same situation as she was. Some of them even had bachelor’s degrees. Jackie says it was empowering to be in a room with other women who wanted a career change: “They wanted to build things and be hands-on; basically do what the boys do.”

When it came to trying out each of the trades, Jackie was looking for something that would keep her busy with something new every day.

“Carpentry was fun but I hated the texture of the sawdust,” Jackie says, explaining how she narrowed down her options to plumbing. “What really drove me into plumbing was it’s versatility.”

After completing two weeks of work experience at the end of the program, the plumbing company for which Jackie worked hired her: “I was so excited!”

She was on her way to completing the 6,400 hours of training that apprentices need before writing the Red Seal exam, which, upon passing would give Jackie her “ticket” (certification) to work as a plumber anywhere in Canada.

As a BCIT student, Jackie received the Concert Properties and Partners Graduating Award for completing the Trades Discovery program. Watch the thank-you video.

While Jackie was getting residential plumbing experience with her current employer, she wanted to get some experience with commercial, too. That’s when she re-connected with BCIT through the Facilities and Campus Development (FCD) department.

“Facilities Services [a division of the FCD] is proud of its program of sponsoring BCIT trades student apprenticeships,” says Peter Morgana, Manager, Facilities Services – Mechanical. “We are able to provide them with the hours of workplace experience they require for certification by the Industry Training Authority (ITA), exposure to a wide variety of building technologies on our campus, and interaction with skilled and experienced senior tradespeople.”

Jackie was Facilities Services’ first opportunity to sponsor a female trades student. During her time with their plumbing team, Peter says that she proved herself to be a great asset to the group as a fast learner with lots of energy and enthusiasm.

“Jackie left us at the end of 2020 as a fully qualified Red Seal Plumber, and I am confident she will excel in her brave career choice,” Peter says.

Jackie’s advice for women considering a career in trades

While Jackie didn’t expect to be treated any differently because she’s a woman, she does believe in the importance of amplifying everyone’s unique strengths on the job.

“It’s important to remember everyone has their strong points and weak points and it doesn’t matter if you are male or female,” she says.

Today, Jackie is working full-time at Pioneer Plumbing, where every day is different, providing an opportunity to learn something new: “This past week I spent two days digging a hole trying to find a water main. We couldn’t find it so we did a trenchless water main replacement, which means you basically pull a new pipe through the old pipe by winching it through with a tow truck, which cuts the old pipe in half. Then this morning I was changing a shower cartridge and a shower head. I love how it’s something different every day and I’m always learning. It’s fun!”

She also gets to work her creative flair through finishing projects: “Installing toilets and faucets that are brand new and high end is something I really enjoy. I like making everything look nice and complete. That’s so satisfying to me.”

Looking ahead, Jackie plans to grow her career by obtaining more tickets. She says she will definitely return to BCIT for the educational portion of her training.

When asked what she would tell other women and girls thinking about a career in the trades, Jackie has some keen words of advice: “Don’t be afraid to do it! I think what was holding me back was the fear of being criticized or what people would say… and now that I’ve done it, I couldn’t be happier with my career choice. I love it and I’m so happy. You just can’t be afraid to take the leap.”

Learn more about BCIT Trades and Apprenticeships and the Plumbing program.

More stories about the trades at BCIT:

9 cool things you never knew about working in trades

A lasting legacy: BCIT trades students can access new awards and bursaries, thanks to the Jordan McIldoon Memorial Endowment Fund