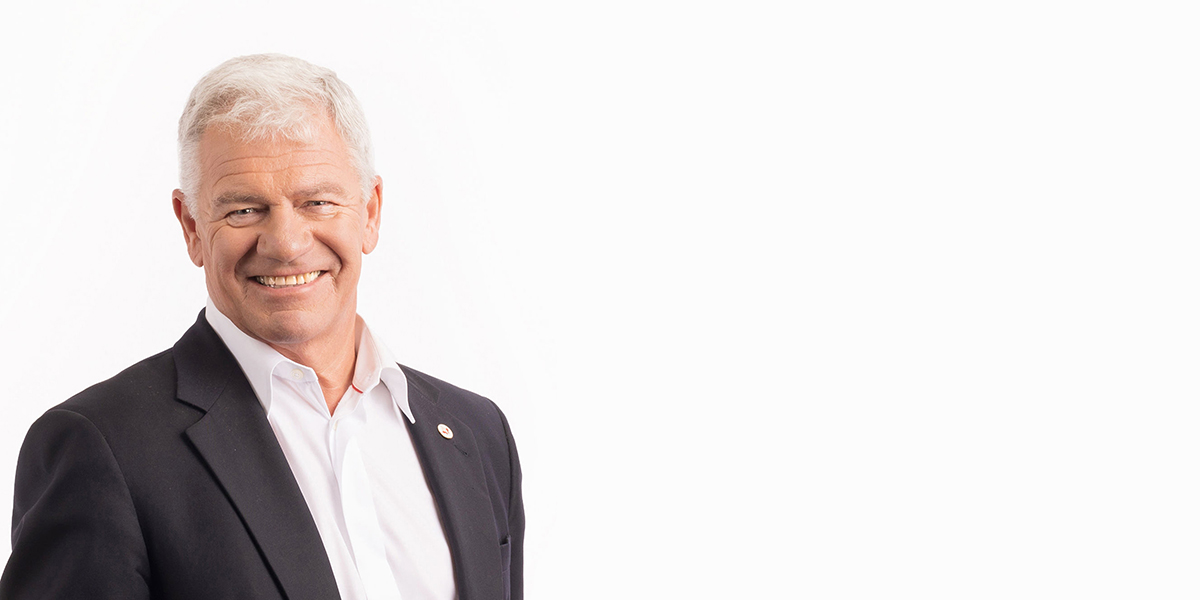 So says Clive Beddoe, founding shareholder and Chairman of the Board of Directors for WestJet airlines.

The former real estate developer and director of the Alberta Investment Management Corporation (AIMCo) brought this respect for people—and a belief in letting employees participate in the success of an enterprise—to the founding of WestJet. Clive’s keen business acumen has been instrumental in making WestJet one of the most successful airlines in recent aviation history and shaped the development of WestJet’s corporate culture, executive team, and strategy.

“We developed a participatory structure within the company that gave everyone profit sharing, meaning the more profit we made, the more of that profit [employees] got to participate in,” he explains of the WestJet model.

“Ninety-seven per cent of all the airlines that have ever been started, failed,” he continues. “So how do we set ourselves apart? For every dollar that the employees put into the company, we matched it dollar for dollar for up to 20 per cent of their salary.” As a result, Clive believes, WestJet has “a team of people that are highly engaged, highly motivated, and who have a reason to make the company successful.”

This approach, key to WestJet’s success, also provides insight into Clive’s personal ethos. During his real estate career, his ambition was to make sure that the way he treated people was reflective of his personality—not industry norms. Today, his belief in honesty and trust is even stronger: “We need to refocus our energies as leaders and educators on the imperative of integrity,” he says. “Honesty, integrity, doing right by people, living by your word. You make a commitment, you live by it.”

Clive also credits curiosity as key to his successes. “Curiosity is probably one of the most important [traits]. I’m always curious: trying to understand how things work, why they work.” When it comes to education, he says, “I think one of the most important attributes that a young person can have is to be curious: ask questions, understand, learn.”

To develop intuition in business, however, you need both education and experience, he says. Education, Clive says, “is the starting point. But it’s how you apply it that matters at the end of the day.”

“There’s nothing like learning by doing,” Clive explains. By way of example, he describes the moment he received his helicopter pilot’s licence: “The examiner told me, ‘know that this is a licence to learn, not a licence to fly’.”

Perhaps that’s why Clive has such respect for applied learning models like BCIT’s. “To see all the effort that’s gone into training young people, particularly in the field of aviation where I’ve come from, is very inspiring,” he says.

Training at BCIT’s state-of-the-art, 285,000 sq. ft.  Aerospace Technology Campus near Vancouver International Airport happens—in part—thanks to Clive and WestJet. WestJet was a key partner supporting the development of the campus in 2008, and also donated a Boeing 737 on which students still hone their trade.

He has received honorary degrees from two Canadian universities. In January 2019, WestJet took possession of its first Boeing 787 Dreamliner, and named the plane after its Founder and Chairman—Clive Beddoe.

BCIT is proud to recognize Clive with a 2020 Honorary Doctorate of Technology at the celebration gala on October 22, 2019.