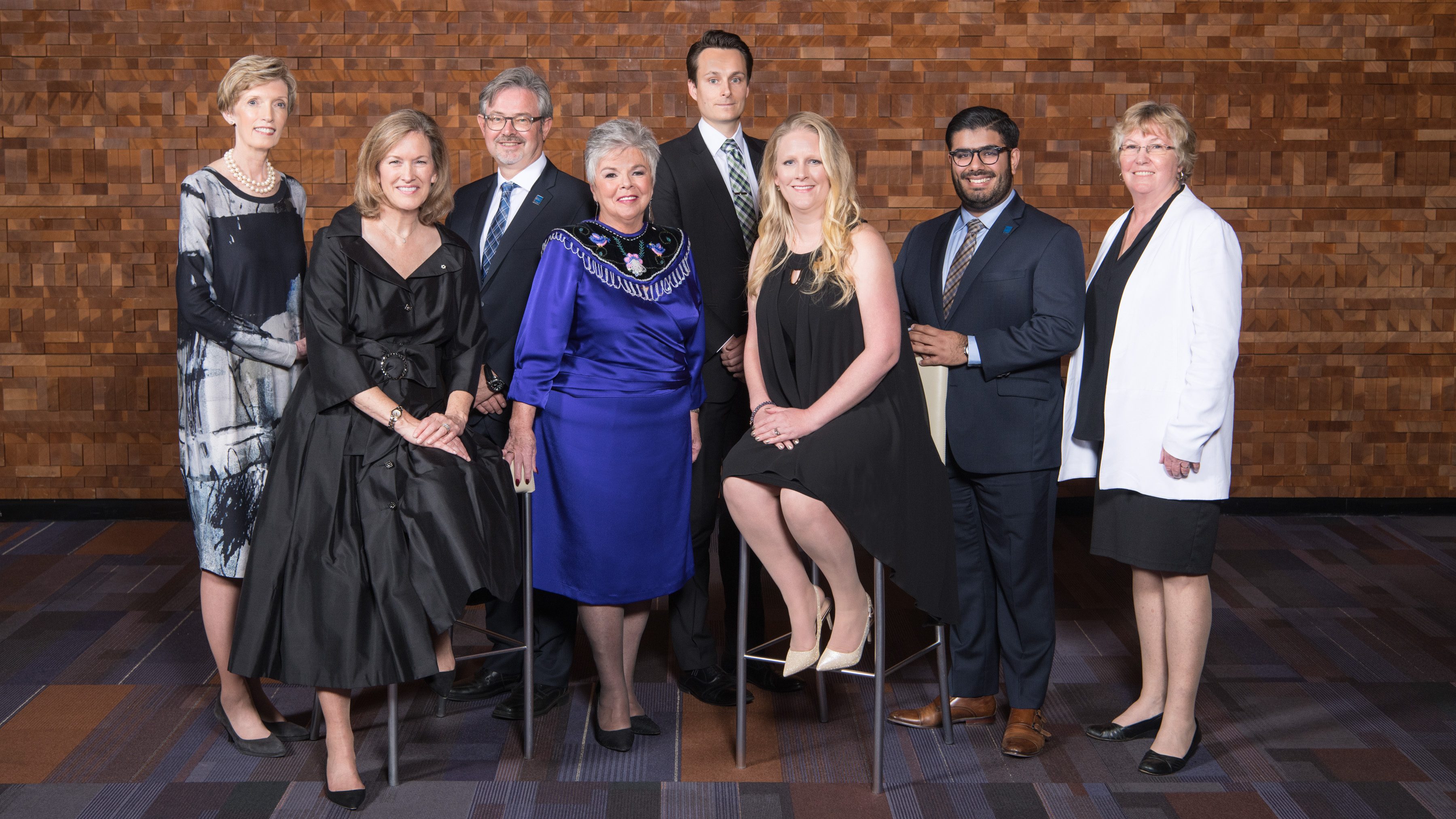 Celebrating the British Columbia Institute of Technology’s 2019 Honorary Doctorate of Technology recipients and four exceptional BCIT alumni, the event highlighted the accomplishments of these remarkably driven individuals and told a compelling story about who we are, what we do, and the impact BCIT has locally and internationally. (Check out a selection of photos from this outstanding event!)

The evening began with remarks from Master of Ceremonies Tim Magwood and an Indigenous welcome greeting offered by BCIT alumnus and Musqueam Councillor Morgan Guerin. BCIT Board of Governors Chair, Kathy Corrigan, offered greetings on behalf of the Board.

BCIT President Kathy Kinloch spoke about the changing face of work, and the ways in which BCIT is reshaping applied education to maintain currency and ensure our graduates continue to thrive in this world of accelerating change.

“We see this disruption as an opportunity to improve productivity, create and fill new jobs and—perhaps even more importantly—help people upskill and reskill to become more employable and adaptable,” said Kathy.

Dr. David Podmore, BCIT Inspire Campaign Chair, BCIT Board of Governors member, and past Chair, BCIT Foundation, introduced the audience to the Inspire Campaign Cabinet. He urged attendees to support the campaign to raise $125 million towards a $450 million renewal plan, which will renew infrastructure and education to meet the needs of employers across key sectors—and students at all life stages—for BCIT’s next 50 years.

“This, right now, is still unbelievable for me,” said a grateful Moshtag, who went on to thank friends, family, and mentors during his acceptance speech.

Moshtagh chose BCIT for its hands-on learning, becoming the first in his family to receive a post-secondary education. He excelled at BCIT, receiving the Marshall J. Heinekey Civil Engineering Award, serving as Chair for his School with the BCIT Student Association and on the organizing committee for the Western Engineering Competition, and placing as finalist in BCIT’s Presentation Idol competition. Moshtagh is an active volunteer in the Bahá’i community, through the Junior Youth Spiritual Empowerment Program, mentoring youth in New Westminster and Burnaby.

Watch the full video of Moshtagh’s acceptance speech. You may also watch this short video, shown at the event, about Moshtagh’s life and achievements.

The second award recipient of the evening was Tara Wilkie, an alumna of the BCIT Bachelor of Science in Nursing and a practicing Forensic Nurse Examiner and ER Nurse. Also a part-time instructor in the BCIT Forensic Science and Technology department, Tara is a leading expert in the human trafficking component of forensic nursing whose knowledge has contributed to the work of Fraser Health Authority through the development of a human trafficking awareness model.

Tara has made an enormous and unique contribution to the knowledge base of healthcare providers, law enforcement, and justice system in the Lower Mainland, provincially and nationally. Her work has raised awareness and understanding of human trafficking by healthcare professionals to identify potential victims and help those in need.

In her heartfelt acceptance speech, Tara made a passionate call for change. “While myself and our forensic nursing team will continue this work, the reality is, it’s not enough.” She ended by accepting the award on behalf of those who have experienced violence.

Watch Tara’s full acceptance speech. You can also watch this short video about her life and accomplishments.

Mischa Steiner (Electronics – Wireless Communication & Computer Networks ’03) was the first recipient of the 2018 Distinguished Alumni Award. The founder and CEO of Vancouver-based clean tech success story Awesense, Mischa has expanded Awesense across the globe, reaching new heights in its efforts to save energy for their customers while significantly combating climate change. For several consecutive years, Awesense, which helps electric utilities optimize and modernize the electrical distribution grid, has also been recognized as a Top 100 Cleantech Company.

Awesense received the BCIC-New Ventures 2011 Sustainability Award, was the highest ranked Cleantech company in Deloitte’s Fast50 in 2017, and received GE’s Innovation Award in 2018.  Mischa is a frequent speaker and panelist at industry conferences, university programs and government events on smart cities, clean economy, AI and the innovation potential of technology to transform business and society.

In his impassioned acceptance speech, Mischa talked about the UN Climate Change Report. “It’s not good,” he said. “We are on a trajectory to surpass 2°C in global warming… That said, I am highly encouraged by the possibility of solving such a global challenge. And it is with technology that we will solve it.”

Watch the full clip of Mischa’s acceptance speech. You can also watch this short video, shown at the event, about Mischa’s life and accomplishments.

The evening’s fourth honouree, Nigel Bennett (Mechanical Engineering Technology ’85) co-founded Aqua-Guard Spill Response Inc. with the goal of protecting the world’s most precious resource—water. For over 25 years, the company has designed, fabricated, and supplied marine oil spill response equipment, and provided related services to over 3,000 clients worldwide. Aqua-Guard’s patented oil-skimming technology is used to clean up spills from Alaska to the Gulf of Mexico and from Egypt to China.

Nigel and Aqua-Guard have received multiple awards for their innovation, business excellence, and entrepreneurialism. An active philanthropist, Nigel recently published Take that Leap: Risking it All for What Really Matters, recounting his business and personal adventures and the insights he’s gleaned.

Mr. Bennett has been an active member of MIT’s Entrepreneurs Masters Program for 14 years and of the Entrepreneurs’ Organization for 15 years. To raise money and awareness of the plight of homeless youth, he has brought executives with him to sleep on the streets in his home town of Vancouver, Canada.

In his acceptance speech, Nigel described overcoming dyslexia and ADD to graduate from BCIT. “Over the years, I actually started believing that my greatest challenges were my greatest gifts,” he said.

Watch the full clip of Nigel’s acceptance speech. You can also watch this short video, shown at the event, about Nigel and his achievements.

We also recognized our 2019 Honorary Doctorate recipients, who will receive their honours at our June 2019 Convocation Ceremony.

Roberta Jamieson was our fifth honouree. In addition to being President & CEO of Indspire— a nationally registered charitable organization dedicated to raising funds to deliver programs that provide the tools necessary for Indigenous peoples in Canada to achieve their potential—Roberta is also Executive Producer of the Indspire Awards. A Mohawk woman who has enjoyed a distinguished career of firsts, Roberta was the first First Nation woman in Canada to earn a law degree. She was the first non-parliamentarian appointed an ex-officio member of a House of Commons Committee, the first woman Ombudsman of Ontario, and the first woman elected Chief of the Six Nations of the Grand River Territory.

Roberta, a long time advocate for greater diversity on corporate boards, is a member of Gender Equality Advisory Council for Canada’s G7 Presidency and former member of Hydro One’s Board of Directors.

In her acceptance speech, she spoke about our obligation to put our talents to use in the service of others. “We’re taught to look way out into the future, to the seventh generation, whose faces we can still see coming towards us,” said Roberta. “That’s our job. Every decision we make, to see what is the impact on that seventh generation.”

She has earned numerous awards, including, most recently, YWCA’s President’s Award and Women’s Executive Network’s “Canada’s Most Powerful Women” Hall of Fame, as well as 25 honorary degrees. An accomplished expert in alternative dispute resolution, Roberta served as Commissioner of the Indian Commission of Ontario. She is an Officer of the Order of Canada.

Watch Roberta’s full acceptance speech. You can also watch this short video about her life and accomplishments.

Elyse Allan is a passionate champion for Canada’s competitiveness, advancing the country’s science and technology base and competitive fiscal policy. During Ms. Allan’s thirty-year association with GE, executive roles in other technology and manufacturing companies, and her current board role at Brookfield Asset Management, she has worked across many sectors of BCIT’s strategic focus: training technically-minded workers for the fields of power and hydro, oil and gas, aviation, health care, transportation, and capital financing.

Elyse actively engages in developing and shaping public policy through industry groups, research, and advocacy organizations. She has participated on a number of federal and provincial government advisory boards focused on Canada’s competitiveness, energy strategy, economic development, transportation strategy, and access to credit. Ms. Allan was recognized in the Top 100 Women of Influence Hall of Fame by the Women’s Executive Network, the YWCA Woman of Distinction (Business), and by Maclean’s and Canadian Business Magazines as one of Canada’s most influential business leaders. In 2014, she was appointed Member of the Order of Canada for her community engagement and achievements as an innovative business leader.

She earned a Bachelor of Arts degree from Dartmouth College in New Hampshire where she studied Biology and environmental studies and an MBA from the Amos Tuck School of Business at Dartmouth, where she chairs the Board of Overseers.

In her acceptance speech, Elyse spoke about the power of team-based cultures and having a balance of soft and hard skills. “It seems that the education process often drives us down the path of either the hard skills or a separate path of liberal arts and soft skills,” she said.  “But a recent Forbes article highlights how so many companies are now realizing that the real secret sauce is about having both.”

Watch Elyse’s full acceptance speech. You can also watch this short video about Elyse and her achievements.

Check out a selection of photos from this outstanding event.