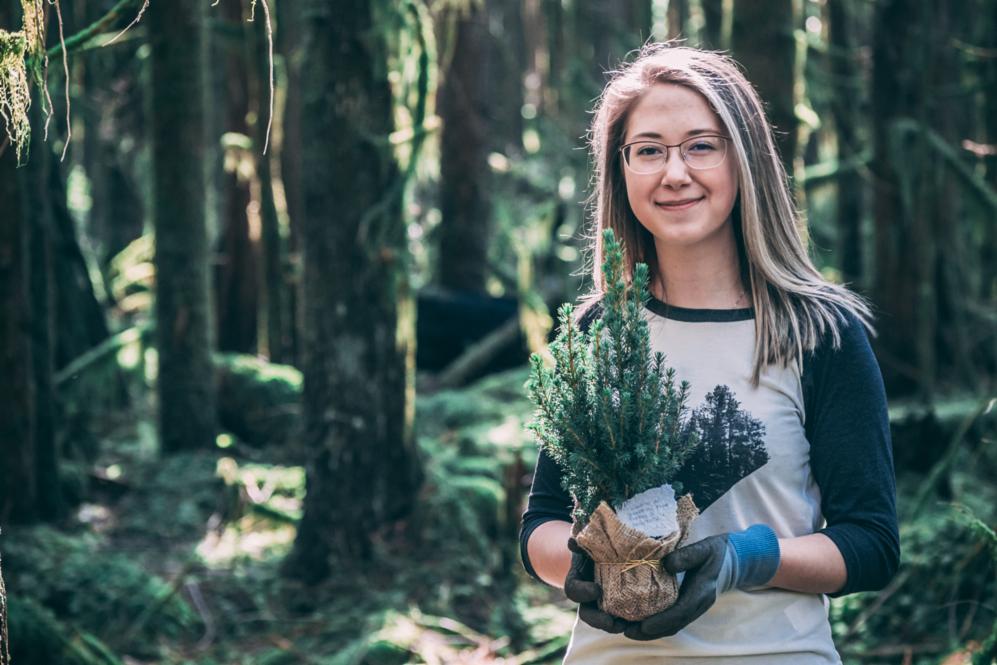 Meet Hunter Bergen, a second-year BCIT Architecture student, and the founder and visionary behind Project Plant Your Future. Her environmental initiative aims to educate people around protecting and preserving forests, through a website and blog where she also allows people to send in personal notes she then writes onto handmade biodegradable paper, and plants with her trees. For Hunter, it was something she felt she just had to do.

How did you come up with this project?
Back in November, a friend of mine from high school passed away. Nature, and looking after the environment, was something that was super, super important to him. He told me that he wanted to do something that made a difference, so the first quote I planted was a quote from him during one of the last times we saw each other. I think just what he stood for, and what he wanted to do with his future inspired me, and I think that’s what really ignited the idea for this project. At his funeral, his mom had said they’ve got a bunch of little saplings out at the front, and when you leave to please take one. There were over 500 people there, so when I walked out and all the saplings had been taken, something inside me went: I have to plant a tree. 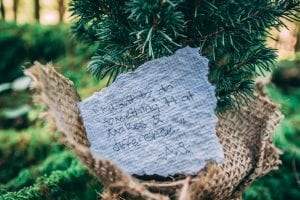 So, on the way home my mom and I drove by a nursery and picked up a tree, and then of course I couldn’t plant it right away because of the weather, but I went home and I started writing up some stuff about how I felt after the whole day. It was just one of those things where I felt so strongly I had to do this, and I was like ‘why shouldn’t everyone want to plant a tree?’ In that moment, it really sunk in how much it meant to me to do something like that.

By the end of November I kept thinking about all these ideas I was writing about, and by the end of Winter Break, I was working on a website. Eventually I was like, ‘let’s just do it.’ I wasn’t sure what other people would think of it, or if people would actually respond to it, or if it was just going to be me going to plant trees by myself. But I wanted to know if people could be interested, so I just put it out there and sure enough, since then I’ve been getting more positive feedback and responses than expected!

Can you describe how you felt when the pieces of this project came together, and you finalized your vision for it?
It was really, really nerve-wracking at first. But of course, I was super excited once I finally had it all together. I realized that everything could connect and be put into action. To actually be taking action – and it’s something I’m thinking about all the time – it just makes it all that more exciting. I’m always reaching out to people and talking about it now.

Has your experience in the BCIT Architecture program helped you at all with the project?
In my program (I ended up taking the elective Building Science) we have a term project that we’re working on. It’s a research project where you and your team pick a topic that you want to research, and at the end of the year, you present it to the industry. Our topic ended up being windows in passive houses. A passive house is basically trying to get a house down to net 0 energy, so all energy that is used within your house doesn’t get released out into the atmosphere; it’s just basically recycling it which is really cool. We’ve been studying that, and reaching out to companies who are helping us and sponsoring us with a lot of our research. Just last week I ended up getting an email from this company located in Virginia, and they’re starting up a new program where with every window that they install, they’re going to be planting a tree in the area wherever the building is. I thought to myself, ‘this is perfect, my research project is on windows and they do passive house windows, and they’re doing basically what I’m doing with my project planting trees.’ I ended up reaching out to them and they’re super excited about my project and now they’re going to be sending me some stuff for us to use for our school project too. It was totally what I’m doing with my personal life, and my school life, which is really cool and exciting.

How did your first plant at Alouette Lake go?
It went way better than I expected. We had to keep pushing back the day because of the weather and snow and it just wasn’t happening. But the day (March 17) was so perfect. It was super sunny out and it wasn’t too hot. I met up 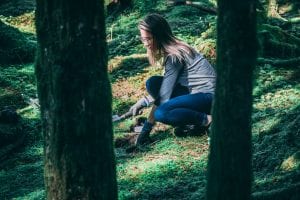 with [Graham] and we walked down the trail, found the perfect spot, then we both did a little photo shoot with the trees, because I love taking pictures as well. And then we just went and found the perfect spot and planted the tree. I actually almost had an emotional moment after planting it. It was funny because, I was sitting on the ground after the tree had been planted and let out a heavy sigh. Graham asked: “oh, do you feel defeated?” And I went, “No this is… It just happened!” He had no idea it was my first plant. Honestly, when this whole thing became an idea, I just didn’t know that I was going to carry on with it, but now the first plant has happened and it’s actually rolling. It’s real.

Is the educational aspect of the project important to you?
I want to not only educate myself, but along the way, I want to be sharing with other people what it is that I’m learning, because I got into this project not knowing anything. The environment has always been something that I’m super passionate about, and always wanted to learn more about, but I realized I never actually invested any time into learning about it. With studying architecture, something that has such a huge impact on the environment and our climate, being able to learn more about that and apply that to my career in the future kind of goes hand-in-hand. The blogging is also almost like an accountability partner for me too. Because I’m putting the blog posts out there, people are now expecting it, so it’s making sure that I’m always active and writing and always thinking about it, and expanding and growing within it.

Can you speak to the artistic side of the project, with the handmade paper-making process and the notes? Is the creative side important to you as well?
Writing has always been personal to me, and being creative has always been something that is super important to me, so that’s kind of how this whole thing started. I wanted to do something different, something creative, something unique. I want to be able to show that in what I’m doing, and it’s a way to get away from school too, and not just think about numbers all day. I love making sure that being creative in whatever it is that I’m doing, career-wise, personal-life, everything, is still part of my everyday life.

What advice would you give to people who want to get involved with environmental projects but don’t know where to begin?
Honestly, what I’ve had to do, is just make sure I’m looking things up along the way – and it does take time. It has to be something you really care about. If you care about it, you’re going to invest the time into it, so by just making the first step of going and looking up whatever it is you want to know about the environment, is great. And there’s so much out there to provide you with the information that you need. Google is your best friend.

Do you have your next plant planned already?
The plan is to do another one in April. I’m going to talk to more people at the tree nursery (there’s a ‘tree guy;’ they call him that!)  and making sure that the trees are available to me. I buy them myself, because as much as I want people to be involved in this project, I don’t want them to feel like I’m just someone else asking for money. It’s really what is personal to you for the note, and I’ll just take care of the rest.

Where do you envision this project going looking toward the future?
What’s funny is, when I first started it, it was only going to be a year-long project, but now I don’t see that happening at all. Especially after talking to the tree guy that I met at the nursery. He said to me, ‘this is a lifetime project you’ve created.’ And I thought, ‘Wow, yes I guess it is!’ If it could just be something that has at least influenced people, or inspires people to do something for themselves over its course, whether they’ve reached out to me or not, that would be a huge, huge thing. For me it’s just going to be a matter of keeping on top of it and reaching out to more people, and telling more companies about my project and asking questions. It’s just going to be a matter of getting the word out to more people, and seeing where it goes from there.

Stay up to date with Hunter’s blog and submit your message online.

Tags: School of Construction and the Environment, Student Association