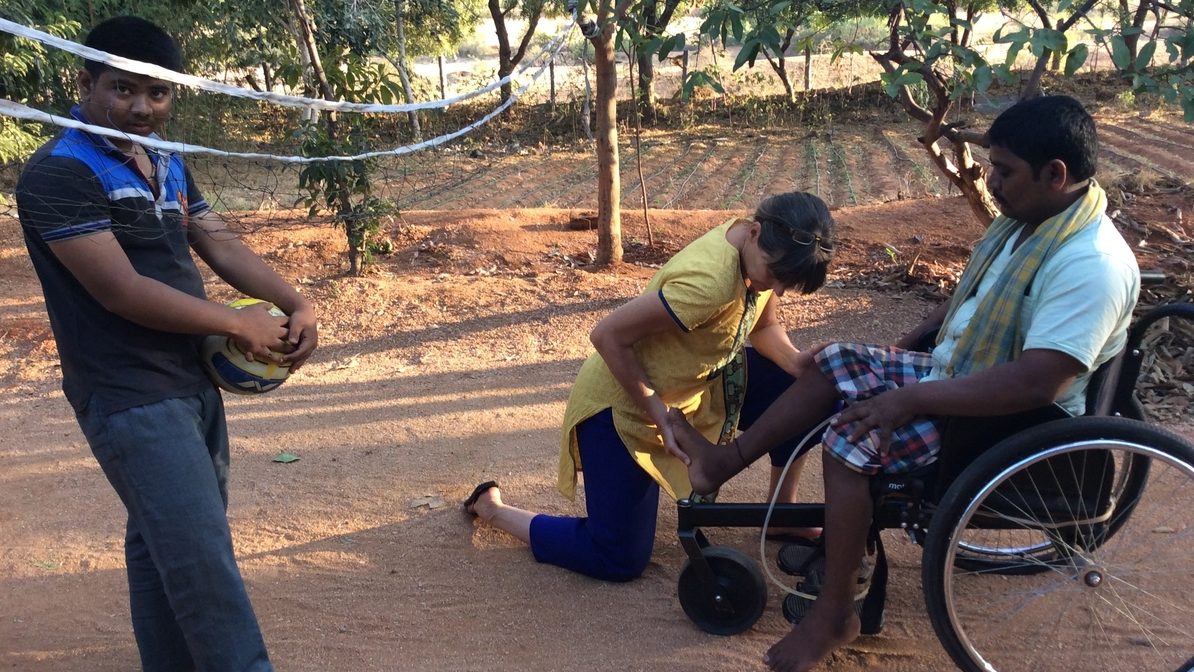 Two BCIT Prosthetics and Orthotics Diploma students went farther than most for their clinical placement. They traveled to Koppal, India to work with a local NGO. Clients of the clinic traveled a long way to meet the students, too—some from as far as 16 hours away to receive their custom orthopedic bracing.

They worked with SODA, the Samuha Overseas Development Association. One of SODA’s missions is to address the needs of people living with disabilities in the villages of South India. The BCIT team was able to help fulfil another core mission: ensuring the continued quality of rehabilitation services.

“Our goal was to start a training manual for orthotic services,” says Jeffreys. “We didn’t want to parachute in with these services and then leave them high and dry. The idea was to create sustainability.”

Jeffreys first heard about the opportunity at her clinical job at Hodgson Orthotics, where she works part-time as a certified orthotist alongside physiotherapist, Andrea Mendoza, who had volunteered in India several times. “She told me, ‘It would be so great if prosthetic and orthotic [students] could come to India because we really need that expertise,'” says Jeffreys.

Jeffreys jumped on board.

She and her students helped patients—many of them children—with spina bifida, cerebral palsy, and spinal muscular atrophy, along with people who had suffered traumatic spinal cord accidents.

One patient who sticks out for her is Mahdi, a 24-year-old rickshaw driver with a spinal injury. He had not walked since his accident four years ago — bedridden because he lacked both a wheelchair, and money to pay for rehab services like physiotherapy and bracing.

Through SODA, Mahdi got to attend a one-month rehabilitation camp. Along with yoga classes, exercise therapy sessions, adaptive recreational sports, nutrition advice, and vocational opportunities, Medhi got something else—long-leg braces (bilateral KAFOs). He was able to walk and stand for the first time in 4 years.

As students on clinical placement, “you might do a couple of these a month [in Canada],” says Jeffreys, “or maybe one every couple of months. We did six within three or four weeks. So that was great for our students.”

The team also got to practice their professional skills in unusual circumstances. By building the orthotics on site, they learned to customize them for the local culture using local resources.

“One thing is that they often wear sandals,” explains Jeffreys. “Footwear is an issue because they don’t wear shoes like we do. We had to Velcro [the brace] to the sandal so it would stay in place.”

The local staff learned new techniques, too. Before the BCIT team arrived, the local Orthotist made the same brace for everyone. “So when we went in and suggested a different kind of brace, it blew them away.” says Jeffreys.” ‘That is incredible! We didn’t know a brace could do that’,” they would say. “We gave them some more options to offer their patients.”

To learn more about Madhi and the BCIT students’ journey, read their blog and have a peek at their Twitter account.

The BCIT Prosthetics and Orthotics Diploma is one of  only two programs of its kind offered in Canada. Innovative, analytical, and patient-centred, this field is a unique blend of science, technology, and clinical care. Note: As a post-graduate diploma, the BCIT prosthetic and orthotic program accepts students every two years. Applications for the next September 2018 intake will be accepted starting November 1, 2017.