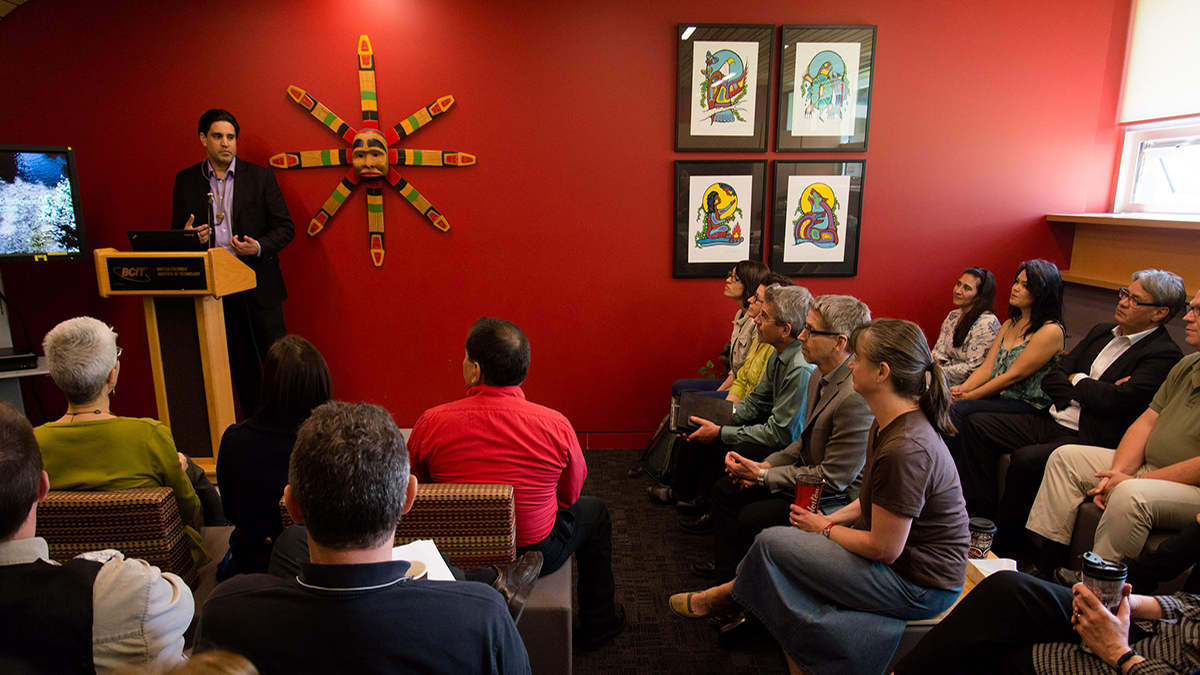 The third annual BCIT Aboriginal Speaker Series has just concluded, having featured a range of speakers focused on the theme of “Supporting Aboriginal Students through Their Education.”

The series aims to bridge cultures and create understanding by showcasing speakers that are creating positive change for Aboriginal people.

The final speaker in the series was BCIT’s own Zaa Derik Gammel Joseph. Derik is a member of the T’lazt’en Nation and an advisor in the BCIT Aboriginal Services department. He recently completed his Master of Arts in Professional Communication from Royal Roads University.

“I am very happy that BCIT acknowledges our Indigenous leadership,” said Derik.

Derik’s Speaker Series presentation, “Starting to Define a BCIT Indigenous Student Perspective,” focused on his thesis research. Derik talked about the need to develop a better understanding of the personal, educational, and cultural factors that need to be present in a post-secondary institution for Indigenous students to aspire to enter and then successfully graduate. He also talked about how BCIT can communicate with First Nations students and what an Indigenous Framework would look like based on this perspective.

“It was an honour to have my home community’s Hereditary Chief, Edward John, in attendance and to speak in support of Indigenous student perspective research,” said Derik.

Chief John is an Indigenous leader who has dedicated his life to the pursuit of social and economic justice for Canada’s Indigenous people, having worked as a leader in Indigenous politics, business and community development. He has served in many leadership roles at the local, provincial, national and international levels, including the First Nations Summit Task Group and the North American Indigenous Peoples’ Caucus. He was recently re-appointed for a second three-year term as a North American Representative to the United Nations Permanent Forum on Indigenous Issues.

Watch presentations from the event’s other speakers.