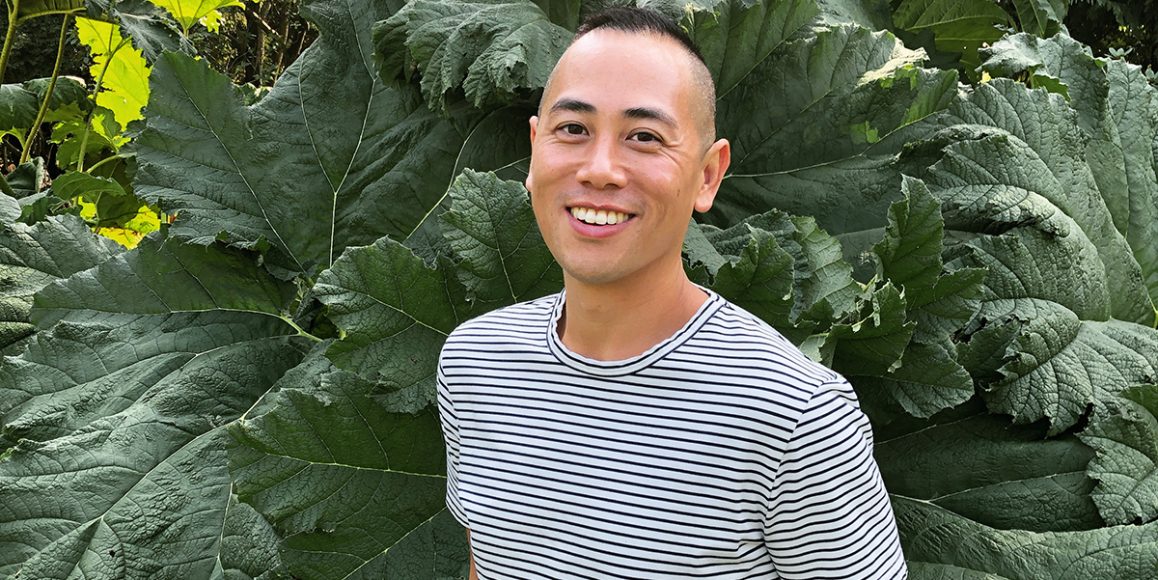 Something was missing from the TV shows and movies Eddy Boudel Tan grew up with: people who looked like him.

“Growing up in the ‘90s as a queer Asian-Canadian boy, with parents that immigrated to Canada, I didn’t see people like me on the screen much,” says the BCIT alumnus.

A self-described ‘drama kid,’ Eddy was drawn to the arts from a young age, acting in school plays and filling the pages of his Hilroy notebooks with illustrated short stories.

Through writing and reading, he says he recognized that the arts should reflect the diverse world around him, allowing readers to empathize with characters and stories different than their own. This passion to celebrate diversity and connect humanity was the catalyst for Eddy’s writing career.

The launch of an author’s first novel, or the ‘debut year’ as it’s referred to in the industry, is a monumental time. Eddy, who is proud to identify as queer and to champion stronger LGBTQ+ representation in the arts, says he began planning the launch of his first novel, After Elias—named in The Globe and Mail’s Best Picks of Fall 2020 and a finalist for the Edmund White Award—before COVID-19 happened.

“I had to shift my priorities, just like the rest of the world,” Eddy shares.

To aspiring writers who will inevitably face obstacles on their journeys, he says, “There were many points in my writing career where I could’ve given up, but I didn’t. Perseverance is key.”

Education as a gateway into marketing and human understanding

Prior to becoming a published novelist, Eddy was drawn to the marketing field because it allowed him to apply his natural creativity in a practical way. That’s why he chose BCIT’s Marketing and Communications diploma program, which he says helped launch his marketing career as well as build important connections with people in the industry.

Eddy is passionate about education and says the solution to most of the world’s problems is simply education: “Even at a personal level, in my situation, a son coming out to his parents is a big educational moment.” He adds that his parents had limited exposure to the gay community before his coming out, and the experience was an opportunity for education and understanding.

For Eddy, education offers a meaningful pathway to his Asian heritage as well. He says he’s asking his parents more about their experience immigrating to Canada and growing up in Brunei, a small country on the island of Borneo.

“I feel more conviction than ever before to understand and also celebrate my heritage.”

An everyone-can-do-it approach to giving back

This full-time marketing manager and writer believes giving back is something that can fit into anyone’s schedule: “If everyone were to identify just one thing that they could give back to the community, the world would be a better place.”

Putting his personal philosophy into practice, Eddy co-founded a grass-roots project offering warm home-cooked meals to the homeless in his West End neighbourhood. The Sidewalk Supper Project launched in 2016 with co-founder and fellow BCIT alumnus Andrea Wesley and was featured in a series of Vancouver is Awesome articles written by Eddy. Since the COVID-19 pandemic outbreak, the project has been on pause for safety reasons.

“My hope is that people who come across our project leave with the message that there are so many ways of giving back,” Eddy says. “I hope they think about how they can do so.”

Learn how you can give back to help students succeed

His second novel, The Rebellious Tide, highlighted by CBC Books’ Spring Preview, is slated for release in July 2021—just in time for summer reading. He is currently working on his third novel.