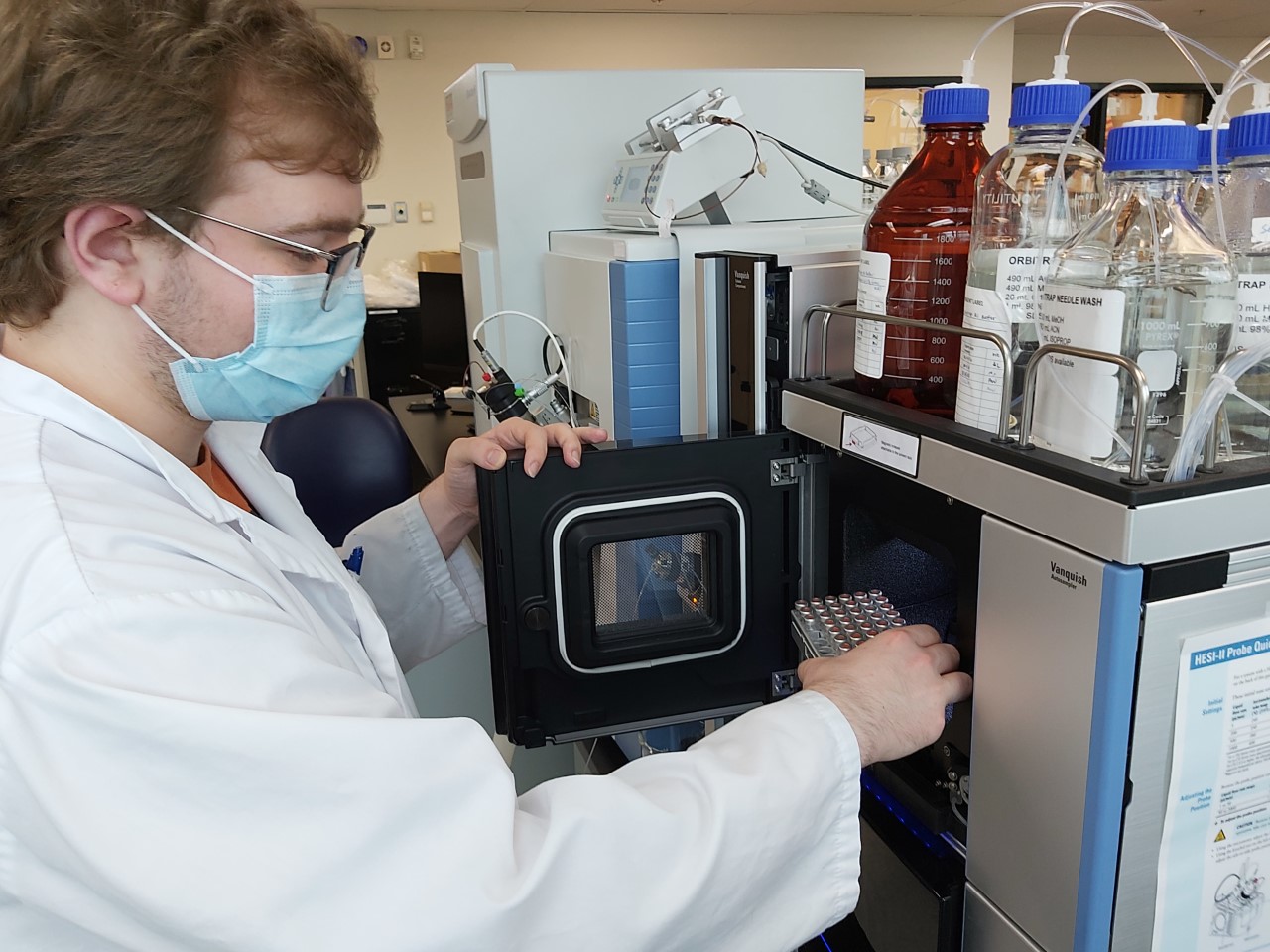 Sébastien Thériault didn’t consider a career path into Biochemistry and Forensic Science until he needed to choose a major. Now that he has, he says the lab is where he plans to stay.

Sébastien is one of the first cohort of UBC/BCIT Combined Honours Bachelor of Science (B.Sc.) in Biochemistry and Forensic Science students. The joint UBC/BCIT program combines the strengths of both institutions so graduates can be job-ready for the interdisciplinary forensic science and biochemistry industries.

“When it came time to select my B.Sc. specialization, I was attracted by the combination of biochemistry and forensics,” Sébastien explains. “I looked into the program, and I thought it could be really interesting.”

Sebastien says the program is a good fit for him, as he’s quite introverted, and enjoys having time to think rather than constantly interacting with people.

He’s now doing an optional co-op with the BC Provincial Toxicology office. He plays a role in method development and validation; however, his main responsibility lies in testing samples sent in from a UBC research team. These samples are obtained from people who end up in hospital after a motor vehicle accident. The UBC team is trying to establish whether drugs, particularly cannabinoids, played a role in the accident.

“The general drug screen looks for illicit drugs too, along with some prescription and over-the-counter medication,” he explains. “But cannabinoids are the main interest: to see how cannabinoids impact driving, as well as how their interaction with other substances may impact driving.” The nationwide study, funded by several government bodies, could impact the law and key policies such as vehicular insurance.

Job-ready while still in school

How did it feel going from school into a workplace? Sebastien: “I feel I was well prepared, the lab experience is transferable. Things like pipetting skills are key in any lab.”

He also points to the value of co-op. “It does a really good job of helping students with practice interviews. There were also resume and cover letter workshops and review, which I found valuable.”

“It’s been quite the ride – my co-op started right as covid began,” says Sebastien. “But I was lucky. Not only was it in a lab that didn’t shut down during covid, it also had forensic elements.” His work initially involved improving extraction procedures used to do the tests.

His favourite part of the work? “Getting to work with three different Mass spectrometers was really cool!”

“The honours program is a heavy courseload but it’s manageable. Procrastination is the big enemy. It’s important to develop those time management skills, and pace yourself with assignments!” He encourages others to ask questions in class, even if that takes them outside their comfort zone.

“I’d also recommend co-op to anyone, but particularly if, like me, they’ve never had the opportunity to work in a lab before, or don’t have much experience with job searching.”

Lastly, “find a group of people you can study with. Our cohort is close, and we have group chat and help each other out. It’s very nice to have that support group.”

Sebastien has two more semesters after his co-op wraps up, with graduation in April 2022.

After that? “I’ll probably be looking for something in a forensic toxicology lab, or maybe forensic DNA analysis, definitely something in an actual lab environment.”

As to his fascinating combined major: “I’m glad I found it!”