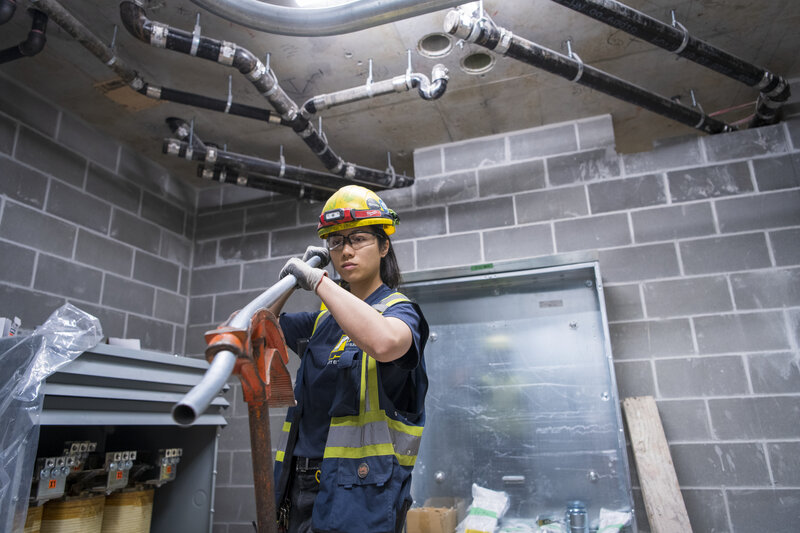 Although the shift in education and workplace protocols brought about changes to the trades sector over the last year, BCIT Trades and Apprenticeships programs responded swiftly and seized new opportunities that came along as a result. Many of these opportunities leave a lasting impact beyond the classroom – shaping the industry and future generations of tradespeople.

Collaboration is key during pivot of programs

BCIT has been a leader in flexibility and innovation for decades, so when the pandemic first hit in March of last year, the Institute was already poised to respond.

That being said, pivoting hasn’t been without its challenges, which Wayne Hand, Dean of the School of Construction and the Environment, has dealt with firsthand. Wayne says the shift to online learning was a big adjustment at first, particularly due to the hands-on nature of trades.

“It was definitely a challenge not being able to deliver a hands-on learning experience to students,” says Wayne. “Student safety was the ultimate priority of course, so we had to think of creative ways to train students without that in-person interaction.”

And when trades students returned to campus in a limited capacity and under extensive safety protocols, Wayne says another challenge was finding the right balance of teaching methods to ensure students’ needs were met.”

“Because their applied activities in the shops were reduced due to the health guidelines, we had to find the right mix of online and in-person learning, which required a lot of innovation,” says Wayne.

On a more positive note, he says the level of collaboration between trades programs greatly increased as a result of the pandemic.

“Departments are working together more closely to collectively address different challenges,” says Wayne. “Whether it’s been through shared lectures, or collaborating on the hands-on components, there’s been a sharing of the workload that is frankly unprecedented.”

Creativity and innovation lead to a safer construction industry

Wayne points out that workplace accidents in the construction sector have been (and remain) relatively high, and BCIT has long been proactive in addressing the issue.

“We have a responsibility to the next generation of tradespeople entering the workforce, as well as those completing their apprenticeships,” says Wayne. “We need to do everything in our power to ensure their safety, and that starts with their training here at BCIT.”

BCIT Joinery instructor Breena Jackson had an idea to raise awareness and educate about workplace safety.

“We’re going to designate a faculty member in each trades program and have them create safety videos for at least two pieces of equipment in their shop,” says Wayne. “Breena was chosen to champion this program due to her innovative online teaching methods.”

Wayne says programs have now developed videos for over 40 pieces of equipment, and they plan to share them with other post-secondary schools, high schools, and shops.

He is particularly excited about the innovative technology being used, which is similar to using a mobile phone to pull up a menu at a restaurant.

“Students are able to scan a QR code with their phone and pull up a video showing different ways to safely operate a piece of equipment,” says Wayne. “It’s very exciting stuff.”

Wayne says the initiative is another example of BCIT leading the way in implementing innovative solutions to real world problems, and he expects more advances like these in the trades sector moving forward.

The future of training and jobs in the trades sector

When it comes to the most important skill sets for trades students, Wayne says they’re primarily the soft skills that BCIT instills in all its students, such as work ethic, communication skills, and critical thinking.

He also points out that students and workers in trades will need to be increasingly more comfortable using technology, as the sector enters a new era.

“Electricians are working with smart building systems, robotics, and automation, among other things,” says Wayne. “These are highly technical areas to begin with and they’re growing more complex, and our trades and apprenticeships programs teach students how to use these cutting-edge technologies.”

A rising trend in the construction industry is the use of mass timber, and usually means the building materials are assembled off-site, which tends to make projects more efficient. Wayne points to the upcoming BCIT student housing project as an example of a mass timber project.

“When we manufacture the building components off-site, not only does it allow for greater quality and precision, but it also lowers our carbon footprint,” says Wayne. “The new mass timber housing residence at BCIT is a great example of this.”

BCIT recently began offering a mass timber microcredential, which introduces students to important features associated with mass timber construction, and is just one of the ways the Institute is preparing students for new and exciting careers in trades.

SEE MORE: Looking Ahead: Computing and IT in 2021 and beyond