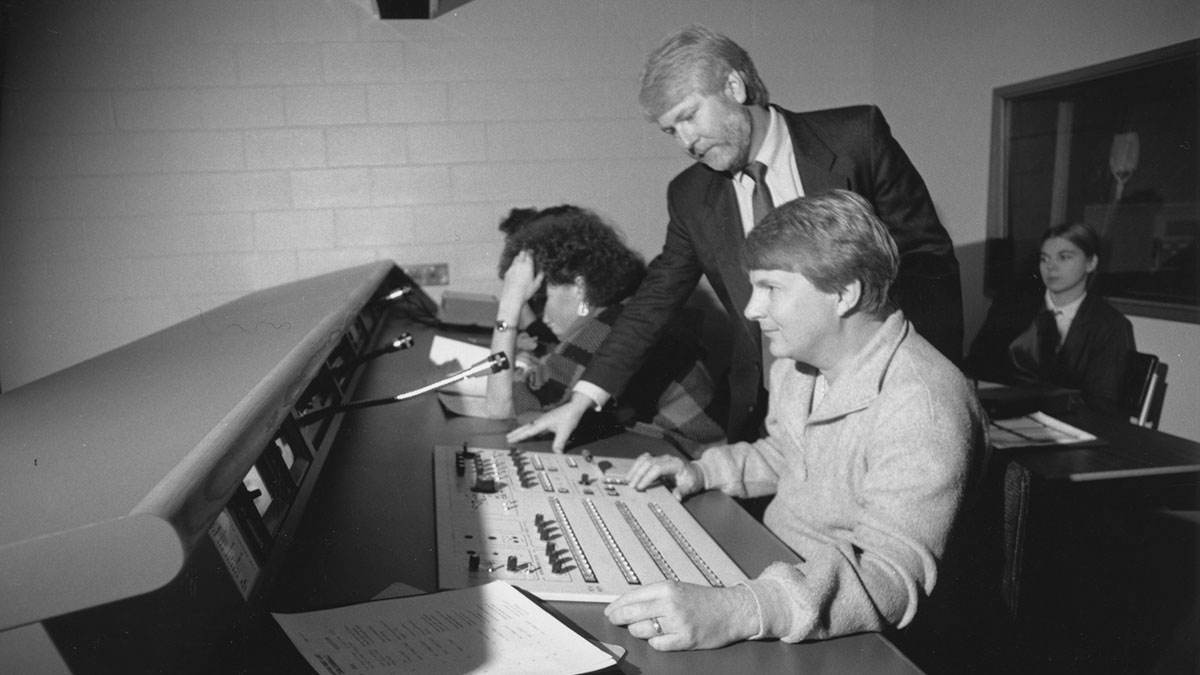 Rob Nason has a lot to say about working in the world of television.

After 50 years teaching students at British Columbia Institute of Technology (BCIT), it’s clear the straight-talking instructor is still passionate about the craft of storytelling on screen, and the ever-changing medium itself.

“I’m just part of the process,” says Rob, speaking by phone after a day working with his second-year students in the BCIT Television and Video Production diploma program.

Like television, a lot has changed in education over five decades as well — from staying on top of technological innovations like high definition to online and editing software — and now, a global pandemic.

Through everything, Rob has kept on being curious and open to innovations.

In his view, this is an important ingredient to longevity and success, and something he shares with students.

“Future-proofing is basically a short form of saying, we have trained students to think strategically, and to think logically, and to always question and research,” he says. “You’ve got to be able to go forward and change constantly.”

This ability to adapt has been key during the COVID-19 pandemic, when the program had to quickly shift into a blended model, combining online and in-person learning. Among the many changes, Rob says, they had to construct plexiglass partitioning for students to use while filming together in the same room.

“We were able to evolve and adapt,” says Rob. “There was a fair amount of creative thinking involved.”

In Rob’s interview to work at BCIT, he told them, he could commit to three years. That was 50 years ago.

He recalls his first official day of work, February 1, 1971 — from the traffic getting from Vancouver to the Burnaby Campus in a snowstorm, to the fact he wasn’t dressed appropriately. (He was immediately told in future, he’d need to wear a tie and jacket, not a cardigan.)

“It was an interesting time,” reflects Rob.

He had just turned 26 years old, but with his bright red hair and youthful looks, colleagues and fellow staff often mistook him for a student.

“I’d be riding the elevator and somebody else would get on and say, ‘you can’t ride this elevator’,” he says. “I would take out my identity card and say, ‘here’s my ID, now I would like to see yours’.”

He admits, he looked especially young for his age.

“All of that, plus a little bit of, shall we say, self-defensive body language, and people went: ‘You don’t want to mess with that kid; he’s actually older than he looks, and he stands his ground very thoroughly’,” Rob says.

Almost immediately, he encouraged the program to modernize. He had already gained on-the-job experience from his time working in television in Atlantic Canada, including time as a Director at CBC. He brought this knowledge with him to BCIT.

He continues to champion the importance of hands-on experience and job-relevant skills for students, who complete a drama or documentary project, as well as a professional portfolio, during their diploma.

His own impressive resume is three, densely-packed pages, highlighting a colorful work history, much of which takes place under the umbrella of his time at BCIT. This includes taking leaves from teaching from time to time in order to work at other positions, including directing and producing positions in New York, and London, England. He’s also completed his Master of Professional Studies in Interactive Telecommunications Management, from New York University.

And Rob points out: “I learn from my students every day.”

A global impact on the media

Rob’s students have gone on to make a big difference on and off the screen, near and far.

“Every television station in British Columbia is populated with BCIT graduates of various ages,” says Rob. “I can say that with confidence.”

He’s taught well over 1,000 students and still manages to list off the names of many of his graduates including television producers and directors, as well as instructors too.

“They basically, from their point of view, are living the dream,” Rob says. “I am very proud of these people.”

Like Ashif Jivraj, BCIT Program Head of Television and Video Production, and one of Rob’s former students.

Ashif has a lot of good things to say about Rob, and sums it up in a nutshell:

So at first, Ashif says, it was initially a little strange going from listening to Rob teach, to becoming Rob’s peer and colleague.

“Rob is still passionate about what he does,” says Ashif. “And he imparts that passion and knowledge to his students every day.”

He also admires the way Rob supports BCIT as an Institution, with his work on various committees, boards, and so on.

In addition to teaching, Rob has acted as the school’s liaison to the film industry for the past decade, helping television shows and movies film at BCIT, including The Good Doctor, and The Art of Racing in The Rain.

Even after graduation, students will often come back to BCIT and check in with Rob.

“He’s definitely made a lasting impression on our students,” Ashif says, adding: “Our grads aren’t just in BC, they’re all over the world.”

Rob Nason has been working in television since 1962, as a Television Operations Technician in Camera, Audio & Lighting, Technical Director, Director, Technical Producer and Manager, Broadcast Operations, and teaching at BCIT for 50 years. Learn more about the full-time, two-year Television and Video Production diploma program.

(This story is written by Chantal Eustace)