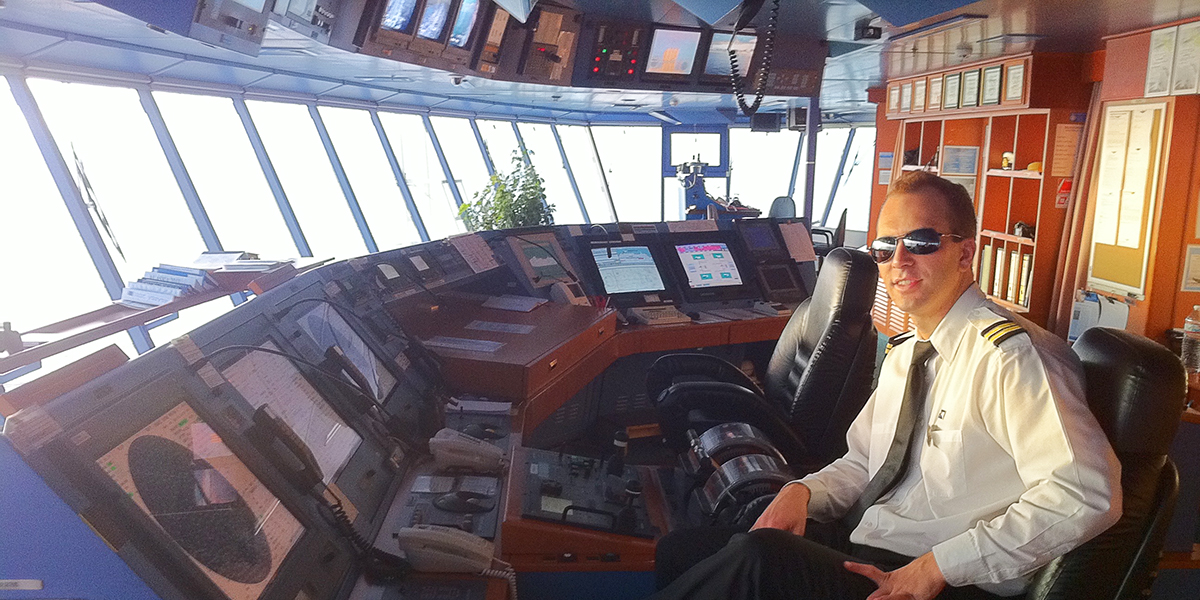 Every day, when Sean Poole looks out his office window, he sees The Seaspan Sovereign. Permanently moored, the ship is a reminder of BC’s rich nautical history. It also happens to be one of the vessels his grandfather sailed on in the 1950s with Island Tug, before the company was acquired in 1970 by Seaspan, the Canadian coastal marine transportation giant and Sean’s employer.

“We have four generations of captains in my family, starting with my great-grandfather,” says Sean, Director of Seaspan’s vessel operations and BCIT Nautical Sciences alumnus. Both his parents worked for BC Ferries—his father was a captain and his mother, a member of the catering staff.

Even with a century-long family history of seafaring and childhood memories of building large replicas of BC ferries out of Lego with his brothers, Sean never imagined he would chart a career in nautical sciences.

“Throughout my teens, I was set on being a lawyer or dentist,” he recalls. “Some of my fondest experiences included being at work with my parents and visiting my grandparents on Hornby Island and Piers Island, but it was just normal life for us. Back then, I didn’t recognize its potential for my career until BCIT.”

Since graduating from BCIT’s four-year co-op Nautical Sciences program, Sean has traveled to more than 50 countries, including South Korea, Singapore, and Senegal, working on cruise ships and drill ships, and in shipyards. He also earned three licenses—Officer of the Watch, Chief Mate, and, the most difficult to acquire, Master Mariner, which qualifies him to captain any merchant vessel.

He says that, while the promise of adventure makes the marine industry attractive to a lot of people, success depends on resilience, competence, and adaptability, especially since mariners will be away from home, family, and friends for several months, or more, at a time.

“You need to be willing to learn every single day—about someone, something, or yourself,” Sean emphasizes. “Out there, it’s a rapidly changing environment and you’re entrusted with a fair bit of responsibility for the safety of your crew, the environment, and the vessel you’re working on. You need to be prepared for that.”

Sean stresses that BCIT taught him how to weather any storm, from within his close-knit cohort of 16 classmates to the co-op terms that tested him in the field to the mentorship he received from several people along the way.

Sean recently volunteered to join the BCIT Alumni Association Board of Directors. Throughout school and at work, he has been fortunate enough to have several mentors who have helped him on his journey. It is part of the reason he is excited about working with the Alumni Association—so he can give back in the same way, connecting with more School of Transportation alumni, helping to support their careers, and giving recognition to the incredible contribution they make worldwide by air, land, and sea.

These days, Sean is content to be ashore in the Lower Mainland with his wife (whom he met while he worked as an officer on a cruise ship and she, a singer). After 13 years at sea, he’s found his dream job at the helm of Seaspan’s vessel operations, enjoying the opportunities to share his experience to help advance the marine transportation leader.

But there will always be something about being on the open water.

“I think most people who have spent any time at sea, know that there is something profound about being out at sea watching a sunrise or sunset and there’s nothing for miles and miles,” he reflects. “It gives you so much peace.”

Learn more about BCIT’s School of Transportation and the Nautical Sciences diploma program.