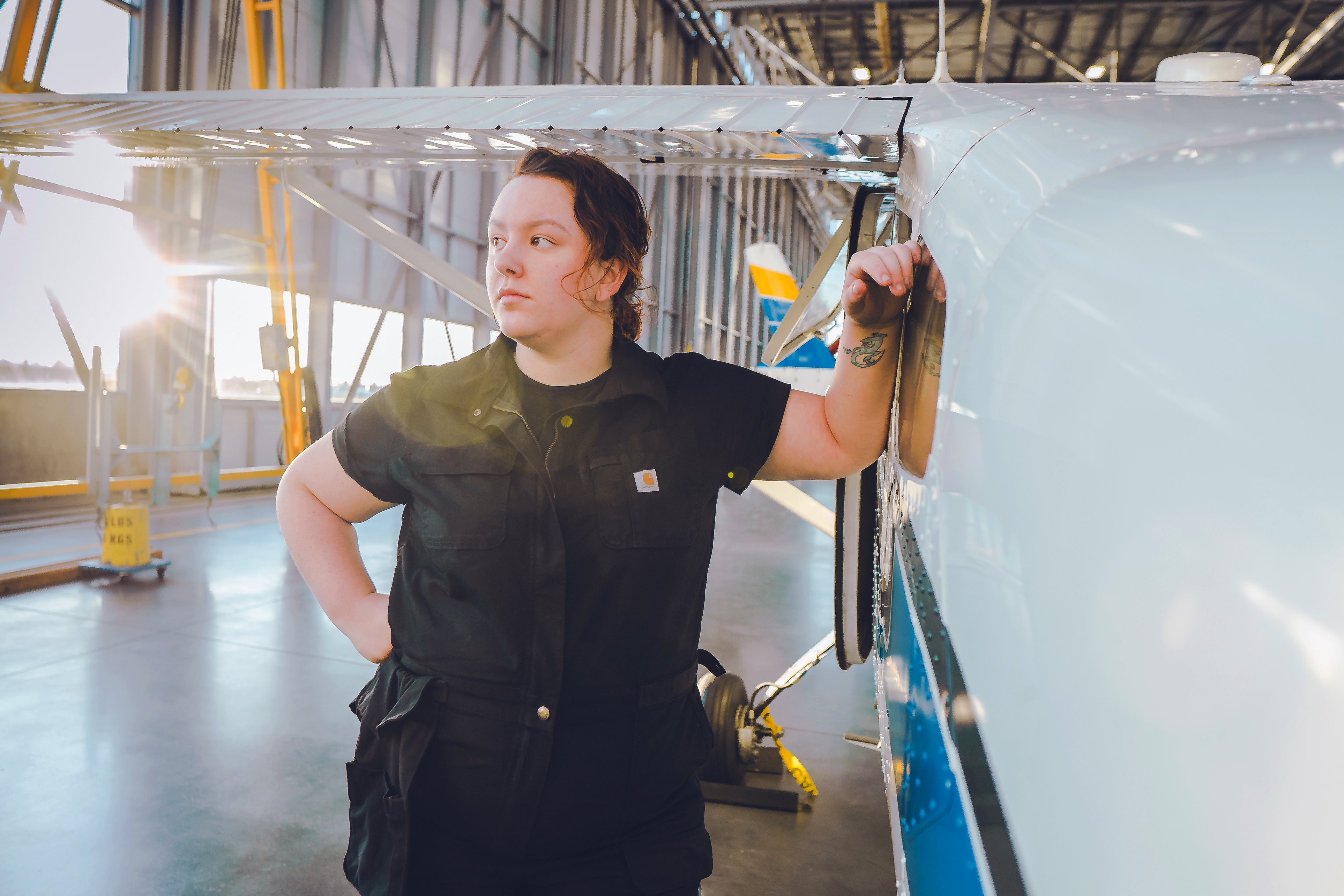 If your car breaks down in the middle of nowhere, you’d be lucky if Danny Cameron is close by. That’s what happened to a mom and her kids on a trip in East Harrison. They were on their way camping, but they popped a tire as they were driving down the forest pathway. The nearest maintained road was half an hour drive away, and the closest gas station more than an hour’s drive. It was much too far to walk. Fortunately, Danny and her boyfriend just happened to drive by, and they stopped to help out.

Danny had a compressor and a portable jump battery in her trunk. They blew up the tire, put a wooden wedge underneath, and duct-taped the tire’s hole. The mother managed to drive off with her children just fine. Later, she sent a message to the hotel Danny was staying at, thanking them for sweeping in and saving the day.

“You have to be prepared when you’re going out in the wilderness,” said Danny. Among many hobbies, Danny often goes off-roading around BC. Off-roading is an adventurer’s journey, where they dare to drive on grueling dirt roads to explore back countries. When she goes out, Danny makes it her personal policy to always bring a mechanics toolkit. She often conducts off-road car repairs.  “You never know what you’re going to find,” said Danny. “It’s not even necessarily you, but other people get in trouble, and I like being able to stop and help people.”

Danny has traversed about half the province. Now, she’s taking her instincts for exploration and mechanics from the land to the skies, taking up Aircraft Maintenance Engineering at BCIT. “I want to see everything,” she said. “Getting into aviation could hopefully afford me some opportunities to travel more and to connect with people from all over the world.”

All her life, Danny was immersed in mechanics. She is well-versed in tinkering with car engines, but working with aircraft presents a whole new set of challenges.

In 2019, Danny was elected as the Chair of Aerospace at BCITSA. She told Link that she stepped up for the role because she wants to be an advocate for students, especially those at the Aerospace Technology Campus (ATC).

Things work differently at ATC. They don’t have as many events, and the library is only open until 5 PM. If you thought food options at Burnaby campus are dismal, Aerospace has even fewer to choose from. To put forth her best advocacy, she says she would appreciate more direction from students, so don’t hesitate to reach out.

Danny Cameron is a woman of many interests and multiple potentials. She’s had experiences running a kitchen, telemarketing, sales, and at one point, she even went to England to train as a makeup artist. When I spoke to her, she openly talked about the many paths that led her here, and her desires to explore more avenues in life.

What do you love about planes?

That’s a complicated question, actually. I am fascinated by machines in general and seeing how things work. I like opening something up and putting it back together, as well as troubleshooting. The fun thing about aircrafts for me is variety. Different planes can have entirely different systems that do the same thing. I’ve been working with other vehicles—mostly cars, trucks, and trailers—since I was really young. Airplanes are a new challenge for me to try to overcome.

The whole field of aviation has always fascinated me. We had a family friend when I was really young who was an air traffic controller, and he took me up in the tower when I was two. [From] then on, I knew I wanted to do something with airplanes. Whenever anybody asked me, ‘What are you going to be when you grow up?’ I said, ‘I’m going to work with airplanes.’ I didn’t necessarily know what that meant—whether I wanted to get into air traffic control, aircraft maintenance, or even the more technical engineering side of things—but I knew that this was the field I wanted.

You are also a hobbyist off-roader. What got you into off-roading?

Part of it is family. Another part of it is when you like cars and trucks and the outdoors—it’s kind of a natural choice, in a way. I like exploring, and I think that’s a really important part of British Columbia’s culture. We have a beautiful province to live in, and I like seeing more of it than I can necessarily get to following paved roads. It’s fun to be able to grab a couple of my friends, drive for a few hours, and end up in a natural hot spring.

I’m also part of some off-roading associations. If you get a call from somebody saying, ‘Hey, I’m stuck. Can you come get me?’ It’s that kind of community. You’re going to get out of your bed at 10 o’clock when you just got comfy and you’re going to go pull him out, because next time, it’ll be you.

You’ve had plenty of experience in mechanics. How did you learn these skills?

My Papa’s been a mechanic since forever. He was running a mechanic shop for 40 or 50 years that he eventually sold. He’s still farming and fixing his tractors. He’s 93 years old, and hasn’t slowed down a bit. A lot of what I know, I learned from him.

What is a memorable experience you’ve had while off-roading?

My boyfriend embraced my hobby of off-roading. One day, we were driving our Jeep along [the road], and he decided to go through a large puddle that was practically a small pond. As we were going through the puddle, I heard a really telltale slurping sound that happens when water’s getting into your air intake. Even if you don’t know cars or trucks, that noise just sounds incredibly wrong.

I started screaming at him, ‘Shut the car off! Shut the car off!’ And he said, ‘Why? We’re in the middle of the puddle. What if we get stuck?’ But we had bigger problems because if you keep feeding the car water while the engine is on, you’re gonna kill your electronics and ultimately your engine.

My boyfriend was taking up the spark plugs, and I have my arm up the air intake trying to shimmy it out. Then he said, ‘What if we turn it back on, but we didn’t do a good job, and it fries the computer?’ I said back to him, ‘Well, what if we’re stuck here and no tow trucks come and get us? We’re in the middle of nowhere.’

Do you have any tips for anyone who wants to try off-roading?

Anybody interested in getting into off-roading should buy a backroads map book. You can get it at most bookstores and grocery stores. It shows trails and gives you an idea of how experienced you should be to go there. Plus, they also have topographical maps and some emergency advisories. Any time you are going into the bush, you need to make sure you bring anything you might need to get you back out of the bush. I include mechanics tools, a two-day supply of food, and a three or four-day supply of water.

My preparedness came from a lack of preparedness. It only takes one time of your battery dying in the middle of nowhere to decide you need a jump kit. Or [one time of] running out of water, and having it be an hour and a half to the nearest gas station, to decide to pack more water [in your next trip]. I’m very fortunate that my learning experiences were small because there are people who unfortunately go up in the bush and have much worst experiences with being unprepared.

What was the transition like going from car mechanics to aircraft?

It’s not as different as you would think in some ways. In other ways, it’s worlds apart. That sounds really conflicting, but a piston engine is a piston engine. If you’re working on a piston-powered aircraft, there are certain parts and components of the aircraft that would be pretty similar [to a land vehicle]. That being said, [aircrafts] are much more regulated. You have to pay attention to a lot more details. And I’m not saying that normal mechanics don’t, but if I don’t tighten a bolt on my car and I start driving, the worst-case scenario is that I pull over and fix it. That’s not the case with aircraft. [Maintaining aircrafts] probably sounds scary to some people, given how much stress that is, but I like being in a career where I never have to be afraid to ask questions.

Do you have any other aspirations alongside being an aircraft maintenance engineer?

I would consider myself a ‘multi-potentialite’. I am not somebody who is going to stop growing and changing. I can say right now I have my sights on aircraft maintenance engineering and getting my AMEM license. It’s an amazing challenge that I’m expecting to be working on for the next few years. After that, who knows. I might want to go into management or develop new technologies, if I get the opportunity. We’ll see.

(This story first published in the January 2020 issue of BCIT LINK Magazine, written by Ali Pitargue with photography by Macus Ong.)