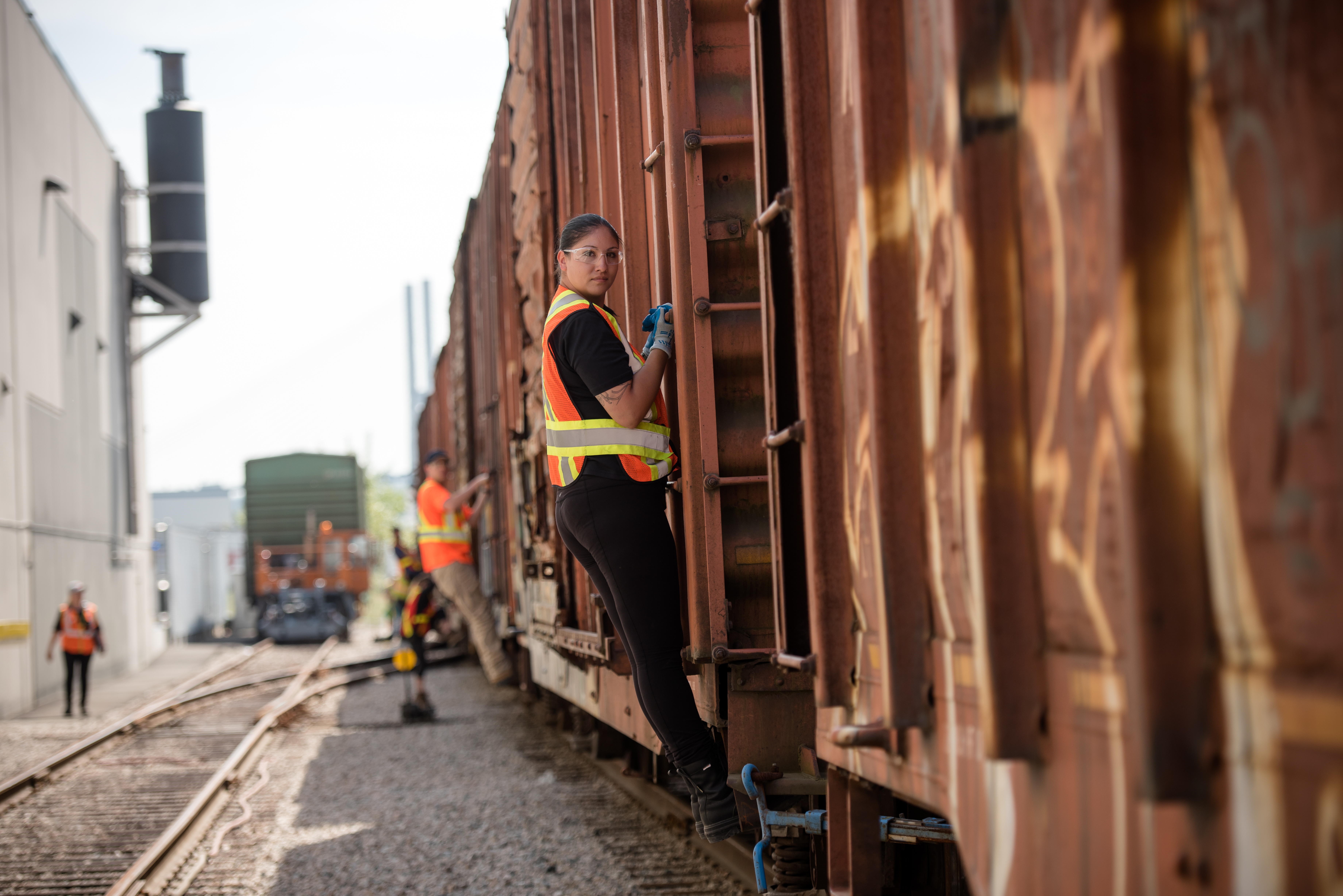 There’s one group in Canada whose growth is quickly outpacing all others: Indigenous youth. Since 2006, the country’s Indigenous population has increased 42.5%—over four times as fast as other demographics—and younger generations, in particular, have seen gains of 39%.

These young people are smart, driven, pragmatic, and motivated to join the workforce. But too often, the best job opportunities are in metropolitan centres, far away from many Indigenous communities. This forces young people to choose between their future careers and their homes, friends, and families.

So the question is: are there stable, in-demand industries that can bring lucrative jobs to the doorsteps of Indigenous youth? And do they allow the freedom to travel, live abroad, and change career tracks if so desired? As Vince Jones knows, job opportunities in the railway industry have been hugely successful in serving this need.

After retiring from his own career in railways, Vince signed on with BCIT to design and deliver a new course in the Faculty of Motive Power, geared specifically towards meeting the next generation of Canada’s Indigenous workforce in the regions where they live.

“When I joined BCIT in 2018, an opportunity came up for us to do an Indigenous class,” he explains. “We were approached by a group called the Prince George Nechako Aboriginal Employment and Training Association (PGNAETA), and they asked us if we were willing to do a course for students up there.”

Vince, who originally hails from Prince George, jumped at the opportunity. With the support of BCIT, he created a four-week curriculum based on the standard RAIL 1001 course, but introduced a dynamic new format. It would require him to go to Prince George for one week to teach, bring students to the BCIT campus for two weeks of onsite training, and then return to Prince George to complete the course.

“The railway industry is in desperate need of employees,” he says. “For many years, companies had been hiring people from the baby boomer generation—and now they’re retiring en masse and leaving huge gaps in the business. And it’s great for Indigenous students because they live in the communities where these railways require people to work.”

A network of opportunities nationwide

Employment in the natural resources sector is a common career path in cities like Prince George, as well as smaller municipalities across BC such as Ashcroft, Burns Lake, Fort St. James, Smithers, and Terrace—yet work in these industries is often temporary, and contingent on external factors ranging from the price of commodities to the time of year.

The railway provides an alternative that is simultaneously more flexible and more stable, as diverse industries require locomotive transportation year-round. “It’s a non-traditional industry,” says Vince, “so a lot of people don’t immediately think of it, until we take time to explain it to them and get them excited about how it all works.”

Each day, freight trains in Canada carry over 900,000 tonnes of goods to serve the national and global supply chain, according to the Railway Association of Canada. In one year, that totals more than 358 million tonnes worth more than $310 billion dollars, towed across nearly five million carloads by over 1,800 locomotives on 42,000 kilometres of track.

On track for future success

Graduates of Vince’s program have already seen great success, even though this is only its second year, and the employment rate for those who complete the course is nearly 100%. He recalls the story of one student who is well on his way to a management position with a major rail company, who still makes time to visit new student cohorts and share his journey.

“We also have another student that very quickly went from finishing the course to achieving a foreman position within three or four months,” he says. “Most of these people have to go through two or three years within a company before they’re promoted to foreman. In this case, it was just a few months.”

The versatility of the industry is a selling point for students. One of the reasons why Vince based the course off RAIL 1001 at BCIT was because it prepares students for more than 25 varied positions within the business. There are yard masters, track controllers, site supervisors—rewarding roles that young people may never have heard of. And like all industries today, technology skills are also highly-prized in the railway sector, whether it’s working with radio signals or IT systems.

“We are incorporating more technology into the courses themselves,” says Vince. “Instead of students going to the rail yard sometimes, which can be difficult, we bring the rail yard into the classroom through virtual reality and augmented reality.”

With innovative capabilities allowing him to take hands-on training opportunities on the go, Vince anticipates scaling his program to Indigenous communities across BC—and beyond. “In 2019, we ran four programs and I’m expecting that 2020 will be probably six or eight programs. And then it just keeps accelerating from that point.”

SEE MORE: BCIT named the Best Digital-Tech School for the second year in a row

Taking the program full steam ahead

As soon as an Indigenous employment and training organization, like the PGNAETA, has seen enough interest among local youth to run a program, BCIT is prepared to launch the enrolment process and send an instructor.

“We’re just starting to interview and train new instructors,” says Vince. “If [the ASETS groups] get a lot of students quickly, we could run one course right after another, or even two courses simultaneously in summer.”

The demand is there—both for the business and for Indigenous youth. The industry is actively seeking talent to oversee and operate railways that network all of North America and drive this country’s economy. Young people are actively looking for gainful employment opportunities with great wages and lots of options for how and where they want to work. Canada’s Indigenous communities are perfectly positioned to guide the railway industry forward into the future.

“This is something that, when I retired from the railway industry, I got excited about quite quickly,” says Jones. “We feel we’re making a difference, both here at BCIT and out in the community, and it’s exciting to be a part of that.

The BCIT railway program for Indigenous youth has seen great success so far. If young people in your community are interested in learning about the railway industry, get in touch with our team in the Rail program at the School of Transportation.